Death, taxes and Chuck E. Cheese's, aka the House of Terror 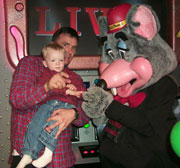 We couldn't resist sharing the following two blogs with you (click here to learn about blogs). As much has we respect the business success of Chuck E. Cheese's, these two blogs address the frustration that many parents experience when they visit. The blogs also validate that a children's edutainment center can offer parents the antithesis of a visit with the rouse (we believe Chuck E. Cheese is a cross between a rat and a mouse, which we call a rouse).

It is said that there are only two things of which we can be certain in this life -- death and taxes. I can't help but agree, with one caveat. There is a little known third item of certainty for those people who are parents. You will, whether you like it or not, end up attending a birthday party held at Chuck E. Cheese's. It's inevitable, so you might as well give up all resistance and go with it.

Let me start out by saying what I like about Chuck E. Cheese's -- the kids love it. No question about it. From my unscientific survey of the parents I know, however, many parents don't love it, including me. First, there are way too many parties squeezed in there at once, making for a very tight fit and a very high noise level. It's not a comfortable place to hang out. Secondly, a high number of parties means a very high number of kids who are running, screaming, flailing their arms, laughing, crying and more. Just watch the action for a while and you'll see quite a few kids literally slam right into each other, like atoms colliding. Thirdly, again because of the capacity crowd, every game is occupied so there is a bit of waiting involved. It is very difficult to get a child filled to the brim with grease and sugar to be patient. And finally, I think the food is awful. At least, the pizza and the cake are not very good. I haven't ventured to try any of the other items they offer.

Apparently, I'm not the only one who feels this way.

They've got us parents in their clutches and we can't escape, because every child wants a party at Chuck E. Cheese's. The company, CEC Entertainment Inc., has 420 corporately owned and 48 franchise restaurants in 48 states and 4 countries. (I wonder which 2 states are missing out on this experience.) They are raking in the dough, so they must be doing something right.

I think someone (are you out there reading this right now?!) needs to come up with a more upscale version of Chuck E. Cheese's. Someone who is willing to make a little bit less than CEC, maybe, but still quite a lot, by creating a place that parents would love as much as kids. I know I would be willing to pay quite a bit more just so that I could go home from these parties without a blinding headache. Isn't there room for another player in this market? What if there was a place that had better food, more comfortable seating, maybe an espresso machine, better music along the lines of, say, Laurie Berkner and Dan Zanes? Is this all just a pipe dream?

Yesterday I took my children to a birthday party at Chuck E Cheese's. One of my daughter's classmates was turning five, and they elected to forgo the whole rent-a-bouncy-house thing (which is the other great option for professional class parents) and just outsource the whole deal.

Of course, the kids all had a great time; but I spent the several hours feeling like Marlin in Finding Nemo -- in a vaguely threatening environment, wondering where my kids had gone. But I finally figured out what bothers me about the place. Not the fact that Chuck E Cheese's combines the noise level of a Metallica concert, the franticness of the Filene's Basement wedding dress sale, and the visual stimulation of the Akihabara; nor that their pizza is terrible and overpriced.

Actually, all those things do irritate me.

But what makes me feel like there's something actually dangerous about the place is that it's almost impossible to know where your kids are and what they're doing. At a playground, you might be some distance from them, but you can (at least theoretically) almost always maintain line-of-sight contact.

In the Land of the Lactose Tolerant Mouse, in contrast, children need to go maybe four feet before they encounter a corner, an obstruction, or something that takes them away from you. Maybe I'm probably overprotective, but I prefer to be able to see what my two-year-old is doing. I know what kinds of games my kids like, but I still like visual confirmation. Theory is good, but I want experimental evidence.

Another problem is that there's no single place in the restaurant where you can see what your kids are doing, and also see the door -- that is, a place they shouldn't be. There's an employee at the front who supposedly checks to make sure that your hand stamp matches that of the kids you're taking out. This is the kind of system that will foil child abductors who are as unmotivated as Chuck E Cheese's employees, but for everyone else, it's what Bruce Schneier calls "security theatre," something intended as a public show of concern for safety.

But we all survived, though my ears are still ringing a bit.