Seconds count when serving that cup of Joe 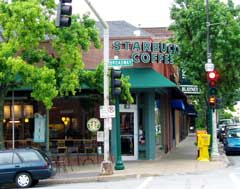 Quality of coffee (see above story) isn't the only thing that matters to guests when it comes to serving up that cup of Joe. Just as important is speed of service. As a follow-up to our April 2005 story, Speed of Service, that took a look at speed of service at fast food drive-thrus, we thought it would be informative to take at look at how important speed of service was to Starbucks, the number one purveyor of premium prepared coffee.

No different than the fast food feeders, Starbucks considers speed of service critical to success. "This is a game in seconds," says Silvia Peterson, Starbucks' director of store operations engineering. Peterson adds that she and 10 engineers are constantly asking themselves: "How can we shave time off this?"

Here are some of the measures Starbucks has taken to increase speed of service.

Since 1999, service-time efforts like these have enabled Starbucks to increase average store revenues by about $200,000 to $940,000 annually.

In the world of time-pressed consumers who have lost their patience to wait, seconds count. They count for guest satisfaction and they count for maximizing throughput and revenues. The fast food feeders, coffee outlets and convenience stores all understand the 'seconds count' equation and are continually upping the ante of speedy service. It's a never ending cycle. As consumer destinations such as these decrease service time, consumer expectations are raised to expect speedier and speedier service. Those destinations that don't look at how to engineer their guest experiences to reduce service time will become slow moving dinosaurs traveling down the road to extinction.