The immutable laws of marketing: Violate at your peril!

Back in 1994, marketing gurus Al Ries and Jack Trout published what has become a classic book on marketing, The 22 Immutable Laws of Marketing, Violate Them at Your Own Risk! Their use of the term marketing refers to marketing in its broadest sense, product or service development - designing the consumer offering so it will be successful. Too many people mistakenly think marketing is about advertising. If you don't develop the right offering that appeals to the consumer, no amount of advertising or discounting will solve the problem. 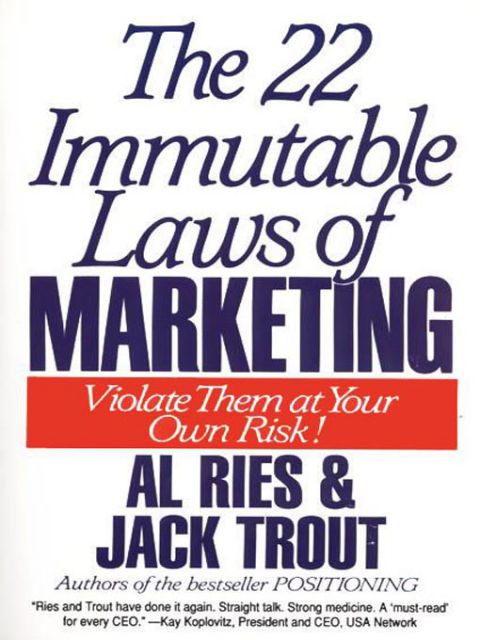 Their book discusses basic universal principles or laws of marketing that have been proven over decades for all categories of consumer products and services and are immutable, incapable of, or susceptible to change. The book's 22 laws for marketing apply just as much today as they did back in 1994 on how to succeed in the marketplace, including with location-based entertainment.

"Marketing is a game of mental warfare. It's a battle of perceptions, not products or services…There is no objective reality. There are no facts. There are no best products. All that exists in the world of marketing are perceptions in the minds of the customer or prospect. The perception is the reality. Everything else is an illusion." - the authors

The authors point out that you can build an impressive airplane, but it will never leave the ground if you ignore the laws of physics, especially gravity. Why they ask, shouldn't there also be laws of marketing that must be followed to launch and maintain winning brands?

The advice in The 22 Immutable Laws of Marketing is simple and straightforward: be first in the customer's mind. If you're not first, create a new category you can be first in. Position yourself clearly against your competition and stay consistent with your position.

What we see too often in the community location-based entertainment industry (LBE), which includes family entertainment centers (FEC) of all types, is that for some reason, developers and owners don't understand that these immutable marketing laws also apply to their venues. They try to follow what they think works, when in fact, what works is counterintuitive to their thinking and has been proven wrong repeatedly in the world of marketing. For some reason, the developers and owners think LBEs and FECs are some unique category with their own unique set of marketing laws. How wrong they are.

Here are a number of the Immutable Laws that we find many LBEs and FECs fail to understand and follow:

Here's where so many LBEs and FECs miss complying with these laws:

Back in the 1980s and early 1990s, when the indoor FEC concept was first evolving, the first centers opened with the idea they would win by being first for everyone (Law #1). They tried to cater to all age groups with things for children, teenagers, and adults. The problem was that they had so many attractions they didn't own any one word (Law#5). They couldn't own the word entertainment as it includes too broad a range of things you could do. And they didn't own the word 'family entertainment' as their mix of attractions covered all ages. Yes, they were first, but the industry quickly evolved and more specialized concepts focusing on narrow market niches evolved, such as children's entertainment centers (soft play centers), adult-oriented facilities (Dave & Buster's), etc. (Law#5 & Law#10). These concepts owned a word category and gave up part of the market to do a better job with a market niche (Law#13). Centers that did a better job with just one attraction, such as laser tag, took over ownership of those attraction categories (Law#5 & Law#10). Now those new concepts owned words that catered to more focused markets (Law#2 & Law#5) and were first in mind for those categories (Law#3). The original FECs "with a little bit of something for everyone" no longer had appeal. Categories continued to evolve with different types of children's centers, such as pure entertainment, edutainment, play cafes for preschoolers, or offering various attractions such as inflatable and trampolines. Today we are seeing adult-oriented concepts continuing to evolve, such as new competitive socializing adult-oriented concepts with mini-golf, darts, bowling, or other games owing their categories. (Law #2).

The problem many LBE owners face with Law #1 is that being first doesn't always work unless you are really good (Law #3). If something much better comes along, customers will quickly change. Do you remember Friendster, the pioneering 1st social media platform? They don't exist anymore. Facebookowns that space. Another example of first doesn't necessarily win is Kmart. They predated Wal-Mart with their discount store expansion in the suburbs. Wal-Mart grew with better offerings to dominate the market. K-Mart is gone. If you are first, that doesn't mean you don't also need to be great. In the LBE industry, we have an excellent example with Discovery Zone that came first but wasn't that great.

We continue to see new centers that replicate the concepts of the industry's past by trying to appeal to everyone with a little bit of everything and other older concepts that are now out-of-day based on the industry's continuing evolution.

The instruction book is out there on how to succeed with the Immutable Laws as well as the history of the LBE industry as a guide. Unfortunately, we continue to see industry road-kill being created by developers of LBEs and FECs who violate the Immutable Laws of Marketing.

For many older LBEs and FECs, it's time to rethink their business models as the out-of-home leisure and entertainment industry has evolved. New models are taking market share away from old models, as the LBE adoption curve illustrates. 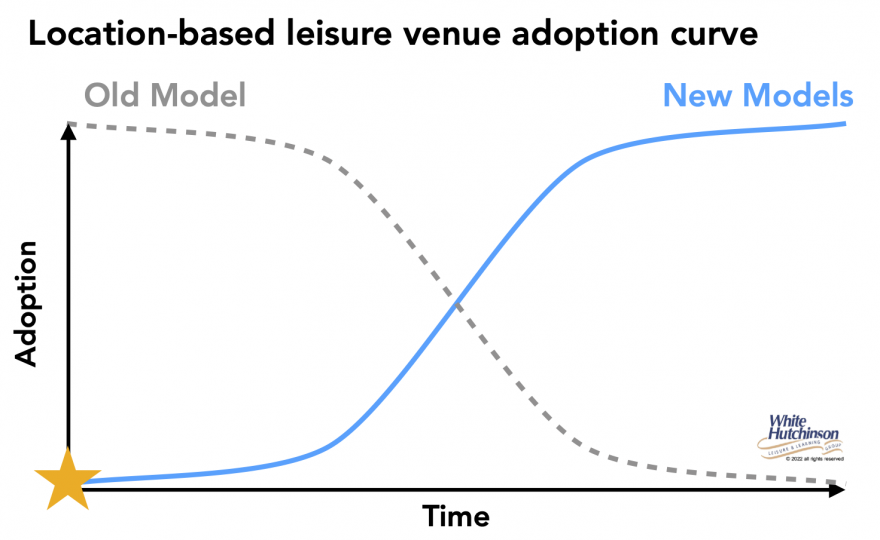