Newly acquired pandemic habits are sticking and even accelerating

Many location-based entertainment venue (LBE) operators hold the mistaken belief they are only competing with other LBEs. That is far from the truth. Any LBE competes for a share of consumers' total discretionary spending, but often, even more importantly, it competes for a share of their leisure time. Each consumer only has so much discretionary money and leisure time to allocate among all the options.

In 2019, Americans age 20+ had an average of 5 hours and 9 minutes of leisure time. During that year, only 5.5 minutes, 1.8% of that total leisure time was used attending entertainment and art venues (including travel). And on average, adults spent only 0.04% of their income on admissions and fees to entertainment and art venues. The competitive landscape for LBEs is vast. The pandemic has caused that competitive landscape to grow, and it is now accelerating in options.

During the pandemic, Americans picked up a lot of new habits. The Ipsos Coronavirus Consumer Tracker found that between 30% and 45% of Americans say they did things like start baking or cooking at home, getting take-out, eating healthier, investing differently, and streaming entertainment during the pandemic. In a follow-up question to people who said they picked up new tricks, Ipsos asked if people are still doing them. And most of them seem to be sticking - with high levels also saying they're doing them more often. 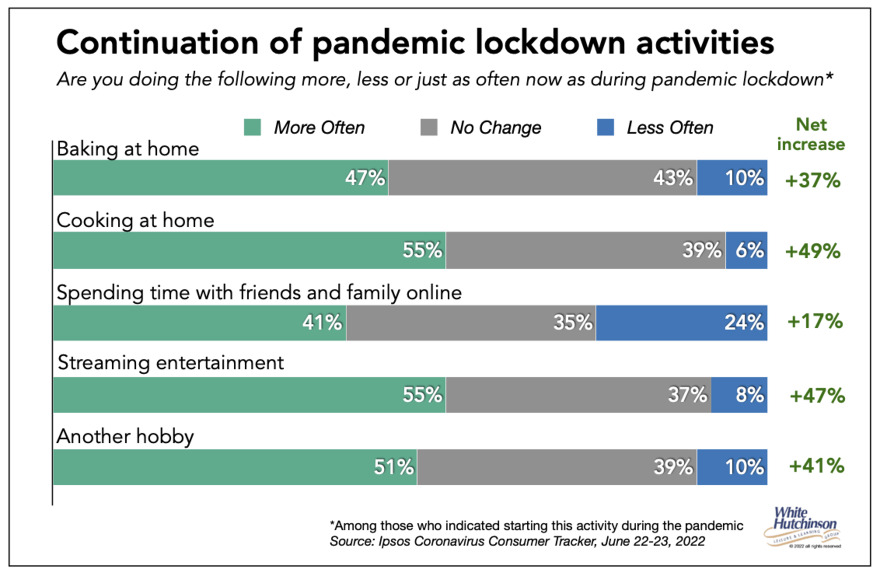 An AP-NORC poll finds the same trend; many habits acquired during the pandemic continue. For example, 27% of Americans report they are likely post-pandemic to continue visiting friends and family via video chat, and 16% say they are extremely or very likely to continue attending virtual activities such as fitness classes and social events after the pandemic.

The American Time Use Survey has released data on how Americans spent their time in 2021. We've analyzed differences from pre-pandemic 2019, and some interesting findings suggest how the competitive landscape has and may permanently change for LBEs.

The total average daily leisure time Americans age 20+ had in 2021 hardly changed from 2019. It only increased by four minutes a day.

As we've written about in past issues, the pandemic acted as a catalyst, speeding up consumers' digital adoption and new digital habits. The pandemic forced Americans in a matter of just months to collectively swap the physical for the digital world, creating an accelerated migration of many facets of life from the real to the digital world. The increased digital engagement included increased use by digital natives as well as by digital immigrants who had previously not been digitally engaged or were only minimally so. This engagement included the adoption and increased use of video games. Even in 2021, when the impact of the pandemic was waning in many peoples' lives and they were venturing out of their homes, the average daily number of Americans age 15+ playing video games increased by 6.5 million, and the average daily playing time for increased by 30% (age 20+).

Data from the American Time Use Survey shows the growing popularity of video games and a significant bump in both playing time and participation from pre-pandemic 2019 to 2021, when the world was opening up for many. 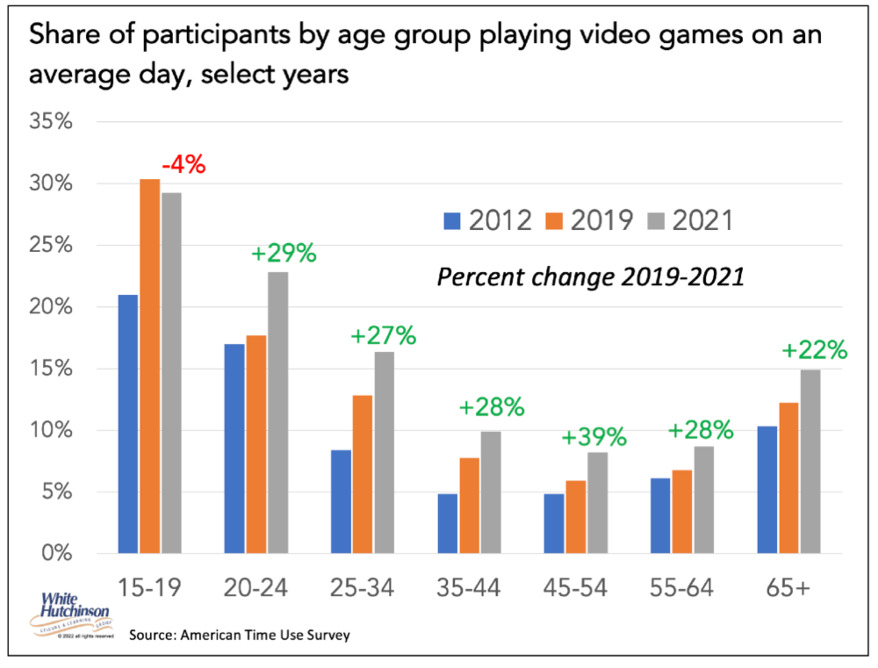 And for every age group, the average time each person in that age group played video games significantly increased in 2021 compared to 2019. 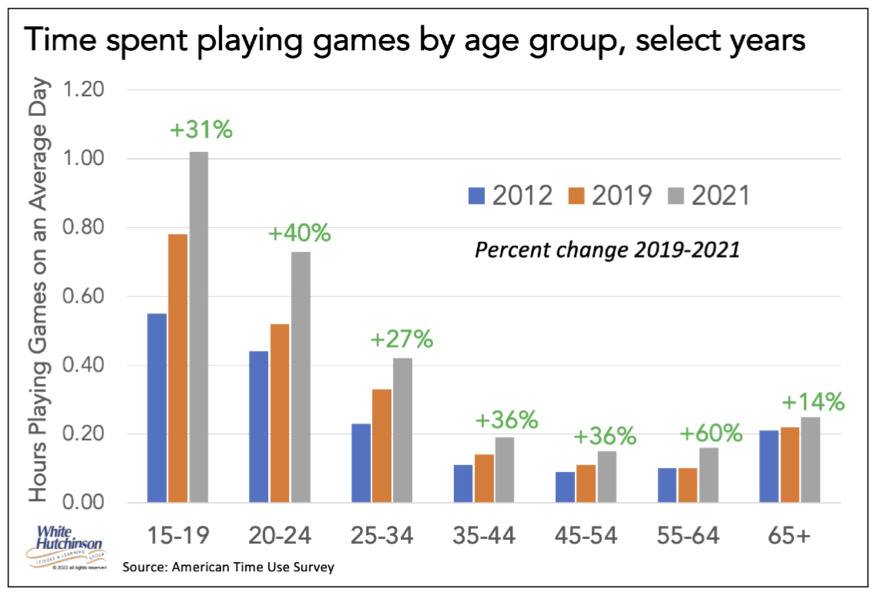 One appeal of video games is that they are a means of socialization and self-expression. Younger Gen Z, age 14-19, value those benefits the most, followed by older Gen Z, age 20-25. However, it isn't just Gen Z who value gaming for those reasons; the majority of all gamers also do. For example, for "playing video games helps me stay connected to other people," 71% of young Gen Z agree, 58% of adult Gen Z agree, and 56% of all U.S. gamers agree. 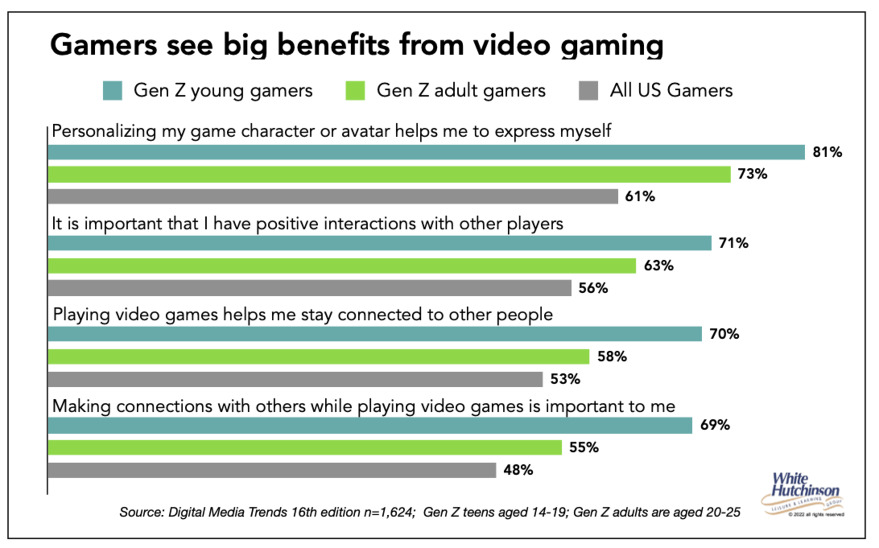 The pandemic probably put a focus on the reliance on video gaming for social connections and interaction. When Gen Z and older generations) couldn't see or spend time with their friends in person because of lockdowns and social distancing, they gathered in game worlds-and this engaging and interactive activity may have sticking power. More than 60% of Gen Z gamers say making social connections while gaming was important to them even before Covid-19. This suggests that for many, this sentiment is not defined wholly by the pandemic and will have long-term staying power. This may be true for many older generation gamers as well, many who became gamers during the early days of the pandemic and learned to use it for socialization.

The ATUS has a category for participation in sports including travel time. It only decreased by 40 seconds in 2021 compared to 2019. That might seem strange until we look at their definition of sports. It includes activities like biking, boating, and walking, all outdoor activities considered safer during Covid. The average time and participation for those activities for age 15+ increased in 2021. On an average day, 19% more people boated in 2021 compared to 2019, 37% more took up walking, and 57% more took up biking. These may well be new permanent habits that replaced some of the decreased time in 2021 attending LBEs, and these new habits could continue into the future.

We now have a new influence on participation in LBEs that could make newly-acquired alternative entertainment and leisure habits, especially the less expensive at-home and digital ones, including video games, accelerate - inflation.

The July Ipsos Inflation Tracker shows that approximately one-quarter of Gen Z, Millennials, and Gen X are already limiting their social and entertainment activities to manage the impact of inflation on their finances. 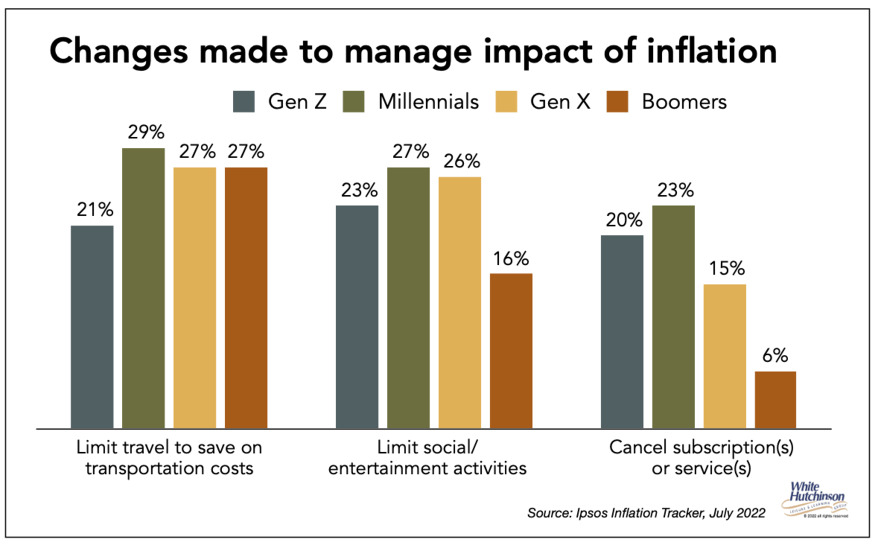 The Tracker also found that more Americans expect to decrease their spending than increase it in the next month (net downgrade). For entertainment outside the home, the net downgrade varies from one in six (16%) to one in four (23%) (percent greater decrease in spending compared to percent increase) among the different generations. 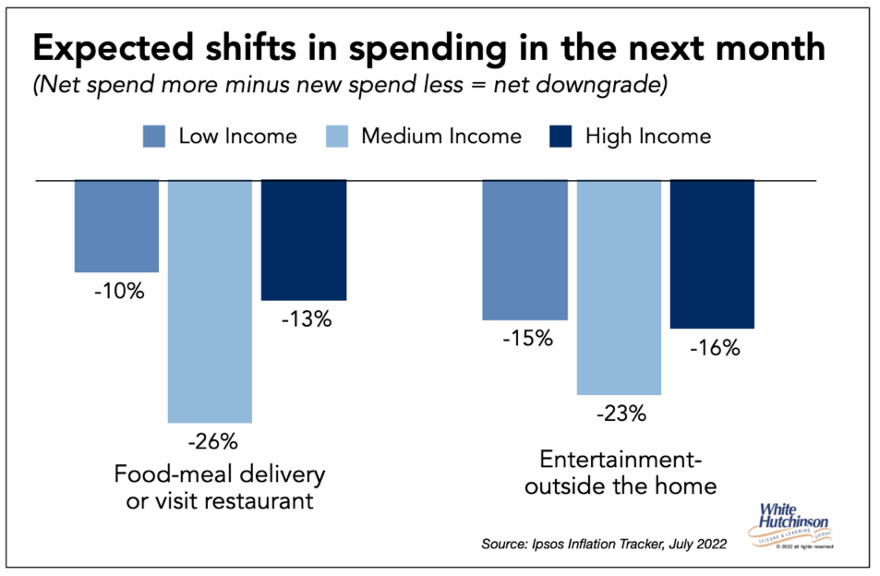 We may be returning to a phenomenon we saw some years ago, consumers engaging in trading up to affordable luxury. Many Americans are willing, even eager, to pay a premium price for certain goods and services with higher levels of quality, taste, and aspiration than other goods in their category but aren't so expensive they are unaffordable. To afford this, consumers trade down to low-cost generic products and services that are unimportant to them or even stop buying them altogether. So, a consumer might buy less expensive grocery store brands to save money so they could trade up to a premium imported cheese.

Those trading up times may have returned for the higher income segments of the population due to the pandemic and a pent-up craving for out-of-home leisure and entertainment experiences, with what is called splurging, trading up to premium leisure experiences by saving money by foregoing some goods and services or buying generic and less expensive ones. A top driver of premiumization of experiences or splurging is a strong social component, "reconnecting with friends and family in a fun environment." This is leading to the success of many of the new "competitive socializing" venues as they combine the fun of playing as a group while enjoying premium food and beverage into a high-fidelity social experience. It may well be that the premium location-based entertainment venues will be the most successful in the future, where for a large segment of the population, typically those with decent incomes, value isn't solely determined by cost but rather by getting a premium experience well worth its price.