The game we know as paintball was developed in the early 1980s. As a combat style game, players eliminate their opponents from play by hitting them with dye-filled, breakable, oil or gelatin paintballs shot from a CO2 or compressed air powered “paintball marker” (gun).

Paintball has a cousin that dates back to 1909 - wax bullet duels. The wax bullets were developed to allow the tradition of duels to continue by allowing opponents to fire at each without the deadly results that fell Alexander Hamilton back in 1804 when he famously dueled with Aaron Burr. In wax bullet dueling, the defeated party would be “theoretically pronounced dead.”

The New York Times reported the first public exhibition of wax bullet dueling in America in 1909. The duel took place at Carnegie Hall, with participants drawn from the Carnegie Sword and Pistol Club. The men faced off 60 feet apart, outfitted in black robes and facemasks. Their regulation .44 caliber French dueling pistols were loaded with French-imported wax bullets, and the novel display enjoyed a small audience. 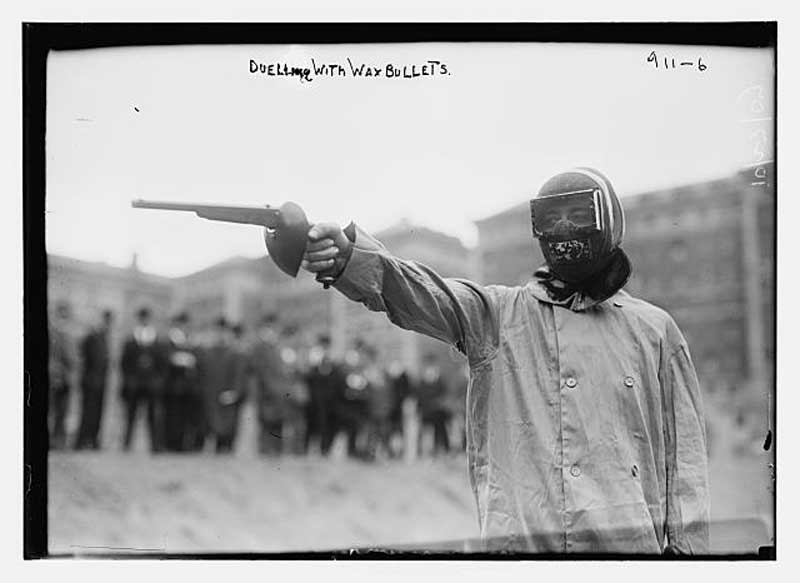 The wax bullets, however, were not entirely benign. Without adequate protection, and at closer quarters, the bullets could still lop off bits of the body, and spectators needed to be wary of any stray bullets, especially in the vicinity of their eyes.