What are the trends with community-based entertainment?

In our last issue one of our articles examined trends over the last 11 years for entertainment venue participation and spending on trips and found solid evidence of a long-term staycation trend. This article will examine trends we have found for what we call community-based entertainment, those entertainment venues visited within 50 miles of home and not during an overnight stay.

Our company makes a major investment in reviewing research studies and conducing proprietary research and analysis so our work for clients will not only reflect today’s consumers, but where they are going in the future. It is not very good business to design a location-based entertainment center or family entertainment center (FEC) based on what worked yesterday if the market is going in a different direction. Many of our research findings are based on analysis of unpublished data from the U.S. Consumer Expenditure Survey for both spending and participation.

The Consumer Expenditure Survey collects information on the spending habits of American consumers, including data on their expenditures, income, the number of households making particular expenditures and other household characteristics, using both a Quarterly Interview Survey and the Diary Survey of approximately 7,000 households each year. The U.S. Census Bureau division of the U.S. Bureau of Labor Statistics conducts the survey. Community-based entertainment spending in this article is defined as fees and admissions at location-based venues including movies, theme parks, concerts, museums, zoos, FECs, plays and similar entertainment-type venues.

Our CEO, Randy White, first reported our research findings found in this article during his keynote speech at the DNA (Digital Out-of-Home Interactive Network Association) conference held January 21, 2013 in London and again presented them at his The Future of FECs, Innovate or Die seminar at Amusement Expo in Las Vegas. This is the first time we are sharing many of the community-based entertainment (CBE) results online.

The average annual household spent 4% less on CBE in 2011 than in 2000 (all expenditures in our analysis have been adjusted for inflation to 2011 dollars). We examined that change in more detail by quintiles of income (all households divided into five groups by income from the lowest 20% to the highest 20%). Over those 11 years, average household CBE spending decreased for the lowest four quintiles of income while it increased for the top 20% of income households (incomes of $94,000+). The top income quintile of households grew to account for 46% of all CBE spending in 2011, 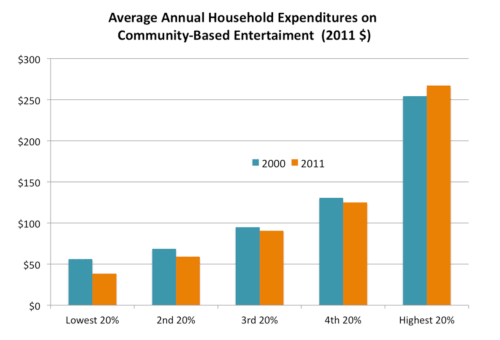 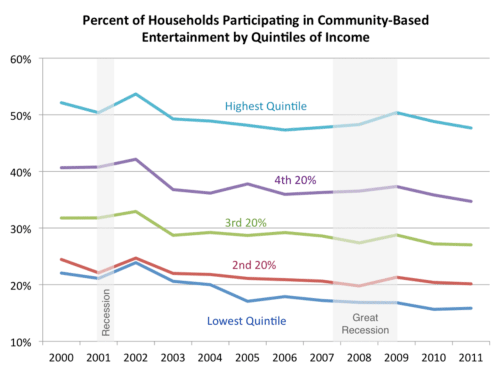 The top 20% of income households grew to one-third (33%) of all participating households in 2011.

Finally, we examined changes in annual CBE spending by those households that did participate in CBE. Spending by CBE participating households increased for all household income groups except the lowest quintile of incomes, with the top 20% of income households showing the greatest increase by both percentage and dollar amount. 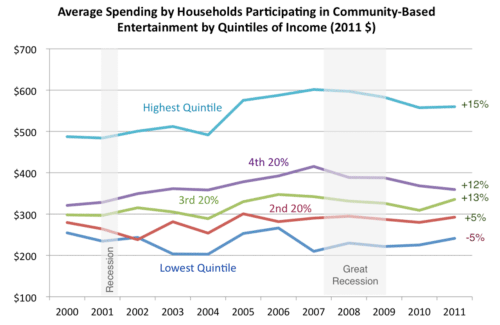 We drilled down even further into household incomes for CBE participating households and here’s what both the 2011 spending and participation rates look like. 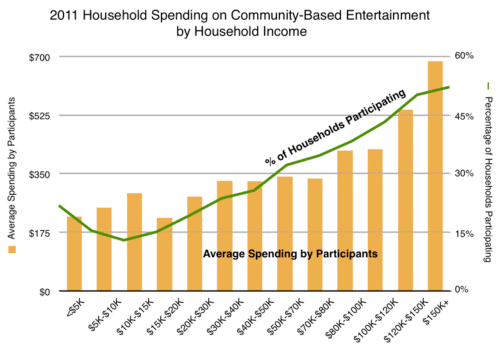 What we are seeing is the social stratification of community-based entertainment – the highest income households are representing a continually growing share of both attendance and spending. We don’t see any signs to indicate that this trend should not continue into the future.

The 18% of all households that have $100,000+ incomes, often referred to as affluent households or upper-middle+ income households, now represent the lion’s share of community-based entertainment spending. They are the market to target. 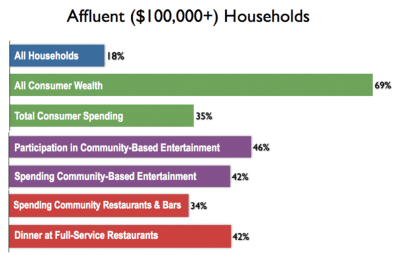 The market size and composition for community-based entertainment has changed significantly since 2000. To survive and prosper in the future, FECs and other types of LBEs need to address the reality of the new and changing market.