Karaoke is an extremely popular Vietnamese pastime, perhaps the most popular leisure activity for young adults. As elsewhere in Asia, it takes place in a private room. There are dedicated commercial karaoke facilities throughout Vietnam. In the major cities such as Danang where our company is designing and producing a large entertainment and restaurant center, many of the commercial karaoke centers are in multi-story buildings with multiple rooms. Karaoke rooms for rent can also be found in many hotels.

Groups of friends and acquaintances will get together and rent a private karaoke room for several hours. In addition to signing and dancing, they drink beer and eat snacks. You don’t find many bars in Vietnam, as karaoke rooms really serve that function for a night out with friends and drinking.

Karaoke is believed to have been invented in Japan in the 1970s. Its origin, however, is surrounded by obscurity. One popular account holds Daisuke Inoue, a musician who provided instrumentals for people who sang at bars in Kobe, as the inventor of karaoke. The story goes that one day a customer was so impressed with Inoue’s musical ability that he asked Inoue to accompany him on a business trip. Too busy to go, Inoue instead recorded his instrumentals on a tape and gave it the businessman. According to Inoue’s account, this was the birth of karaoke.

The reason karaoke is so popular in Vietnam and elsewhere in Asia may be accredited to the traditions of older times. Some Asian cultures are deeply rooted in their collective practices of song and dance. Another reason may be due to the fact that Asian culture tends to be more conservative where emotions are not expressed publically, whereas in the Western cultures, acting a little crazy in public or expressing emotions is culturally acceptable. Private karaoke rooms allow Asians to vent and express themselves freely in private. 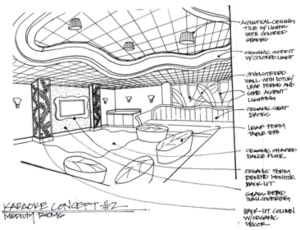