As this eNewsletter is an independent publication free of the influence of advertisers, we can report on things that other industry publications won't touch with a 10-foot pole. We have actually gotten a reputation among leisure industry suppliers, organizations and consultants for being a bit of a nonconformist. That doesn't bother us. As is consistent with our company's ethical philosophy (see our statement of Philosophy and Ethical Standards), we subscribe to the belief that it is our obligation to represent both the best interests of our clients and their guests, not those of the industry or suppliers. And when it comes to this eNewsletter, that means speaking out about unethical, unprofessional, unsafe or otherwise inappropriate industry practices we run across. In the past we've written about:

These stories have not necessarily made us any new friends in the industry. In fact, we unfortunately have probably created a few enemies with our outspokenness. But we have also created dialogue within the industry about topics that would otherwise never have been discussed, and this dialogue has sometimes resulted in positive change. 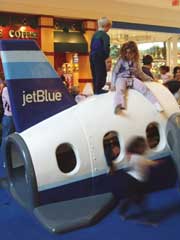 Well, late last year we were at it again, and did it ever create an uproar. Our November 2004 issue included an article, Soft Foam Play Areas Pose Safety Hazard, about how many of the soft foam play areas (sometimes also called children's soft foam playgrounds, sculptured soft play areas or soft playscapes) appearing in enclosed malls and leisure venues are unsafe for children and violate children's civil rights, according to the requirements of the Americans with Disability Act (ADA).

It didn't take long for us to hear the reaction from soft foam play suppliers. Based apparently upon discussion among its board of directors, one supplier called us within days and requested that we write a follow-up article clarifying that our comments did not apply to all soft foam suppliers (meaning them). Another supplier had their lawyer write us a letter describing our article as "most egregious" (that's lawyer talk for "extraordinarily ridiculous, reprehensible or bad"). He further requested that we "set the record straight" by retracting the supposedly inaccurate statements in the article and clarifying that our comments did not apply to his client.

We examined the Web sites of both these suppliers who alleged our article did not apply to them. On each of their Web sites, we found multiple photographs and layouts that clearly indicated the unsafe designs and ADA violations our article specifically described. We were also fascinated by parts of the lawyer's four-page letter in which he:

The representative from the first supplier who called us suggested we talk to their company's safety expert about our safety opinions. We said we would be delighted to talk to the expert and to have that individual call us. That was over three weeks ago, and we're still waiting. In our reply letter to the lawyer, we requested that he respond if he disagreed with our letter. We have not heard from him. (We thought you might be interested in reading our reply letter to the lawyer. It is too long to include in this article, but you can read it by clicking here. We have drawn our own conclusions from this lack of response. You can draw your own.

We believe that the suppliers, owners and those responsible for maintenance have an obligation to design and offer users entertainment and play equipment, venues and play areas that are safe and that comply with federal civil rights laws, specifically ADA. When it comes to children's play areas, this is even more crucial, as young children don't have the ability to discern hazardous and unsafe conditions.

We have carefully reexamined our comments in the November article (see reply letter to supplier lawyer for more details on this), and we stand 100% behind that article. We hope suppliers and designers of soft foam play areas/playscapes will revise their design practices to offer safe play areas that are accessible to children of all abilities. We also hope the malls and venues where these play areas are located will require the suppliers to follow both ADA and playground safety standards.