We're sure you've seen them - those children's free play areas that are becoming commonplace in malls with all the large imitation foods, animals, and other items made out of soft foam that kids can climb on.

These soft foam play areas were almost non-existent 5 years ago. Now, in pursuit of moms with small kids, hundreds of them can be found in malls. Mall owners want to keep the moms at the mall as long as possible and to get them to come back on a regular basis. Realizing that young children become bored shopping with moms, the soft foam play areas give the kids a way to burn off energy so they won't nag their parents to leave as soon.

The mall owners have good intentions. Unfortunately, most of these soft foam play areas are very dangerous and fail to follow accepted safety standards of playground area design, as well as ADA standards. We have received reports of a number of children's injuries in these play areas.

There are several problems with the soft foam play areas we have seen. First, they do not promote quality play. Rather, by their wide-open random design, these areas encourage wild, random behavior that endangers the child. Children behave based upon the way they "read" the environment, the way the environment "tells them to behave." The design of these soft foam play areas does not allow children to focus on any activity. Instead, the design "instructs" them to find ways to interact with the environment, most of which are dangerous.

At over a dozen soft foam play areas we have seen in malls, we've observed children jumping from one object to another, climbing on top of objects many feet above the floor and running around without looking where they're going. Worse, many of these play areas require children to take off their shoes, making climbing and walking on the highly polished and slippery soft foam objects even more dangerous. 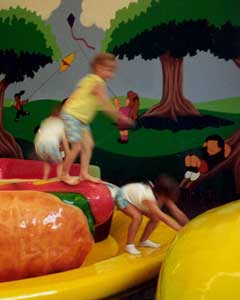 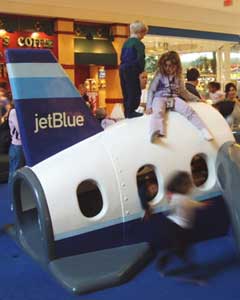 Most soft foam play areas encourage wild and very unsafe behavior by young children. These photos were taken at malls in Virginia and California. The photo on the left shows a girl in the process of trying to jump about 3 feet onto another imitation food. The photo on the right shows a boy standing in his socks on the slippery jet about 4 feet in height, a fall height far in excess of what playground safety standards allow for young children. The jet also lacks the required fall zone.

The other issue with these play areas is that characteristics such as the heights and slippery surfaces pose a hazard to children, rather than a risk. A hazard offers the possibility of injury that children cannot perceive or judge, whereas they can evaluate a safe risk. Another reason these soft foam play areas are so hazardous is they lack age-appropriate challenges, which makes them inherently boring to children. Therefore, kids are on their own to find challenges, often in ways that are hazardous, such as climbing in stocking feet on top of high slick structures or trying to jump from one object to another.

There are two sets of standards for playground safety: ASTM (American Society for Testing and Materials) and the US Consumer Product Safety Commission (CPSC). Although not law, these two standards have become the defacto safety standards, based on court decisions. The soft foam play areas we have observed violate these two organizations' design standards a number of ways, including:

The play areas also violate a number of requirements of the ADA (Americans with Disabilities Act) -- a federal law that must be followed for children's play areas:

It appears that both the mall owners, as well as the suppliers that fabricate and sell the soft foam areas, are under the impression that because these play areas are indoors in malls, CPSC, ASTM and ADA standards and regulations do not apply. Unfortunately, they are very mistaken.

We visited the Web site of a number of suppliers of soft foam play equipment. They described their systems as being safe, even specifically designed with the safety of children in mind. One supplier even went to so far as to explain how seriously they take children's safety. That is all great marketing hype, but far from the truth.

Quality children's play environments are both challenging and safe. Although high in eye candy for adults and children, the vast majority of soft foam play areas fail on both counts.

We are seeing a number of these soft foam play areas appearing in family entertainment centers. If you are considering such an installation, don't be led astray by suppliers' claims or designs. Make sure that the area follows all the standards and regulations established by ASTM, CPSC and ADA for children's play areas. Also make sure the play area is not designed in such a way that it encourages wild and possibly dangerous behavior by children. As most soft foam suppliers haven't demonstrated knowledge of how to design safe play areas that meet ADA requirements, your best bet is to retain an independent children's play expert to design the area or to retain a expert in playground safety and ADA to review the plans for you.