Eating out is in 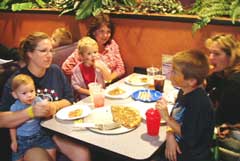 The National Restaurant Association's annual industry survey predicts that in 2005, nearly half (47%) of the nation's food dollars will be spent on eating out. Research shows that in 2004, the typical adult purchased a meal or snack in a restaurant 5.3 times a week. The survey found "half of all adults agree that restaurants are an essential part of their lifestyle and 43% of adults agree that, in general, eating out is now just as cost-effective as cooking at home and cleaning up."

These findings are echoed by the results of a November survey of 1,000 consumers by Technomic, a Chicago-based market-research firm focused on the food industry. Technomic found Americans eating out with the following frequencies:

Technomic predicts younger Americans will continue their frequent eating out habit (almost once a day) as they grow older. "If you think about the 59-to-71 year-olds and Baby Boomers," Michael Allenson, a principal of Technomic, said, "they didn't have a lot of McDonald's and Pizza Huts. That became commonplace more so as the Gen X group was growing up." And when it comes to the youngest restaurant-goers, Allenson said, "There's a much more prevalent feeling among Generation Y of... entitlement. Food is at the top of the scale in terms of what they're entitled to, it's a way to reward themselves. They may cut back in other areas, but not in food. They're less willing to compromise on that than previous generations."

The National Restaurant Association found the average household spent $2,211 on food away from home last year. Because eating out can offer a much-needed break from the hectic schedule of most people's lives, it is easy to justify and less likely to be reduced in tough economic times.