The shift of out-of-home entertainment to trips & vacations

Last issue's article The end of staycations, discussed how participation and spending is increasing for out-of-home (OOH) entertainment, but it is all occurring on trips and vacations, while participation at community entertainment venues is on the decline. 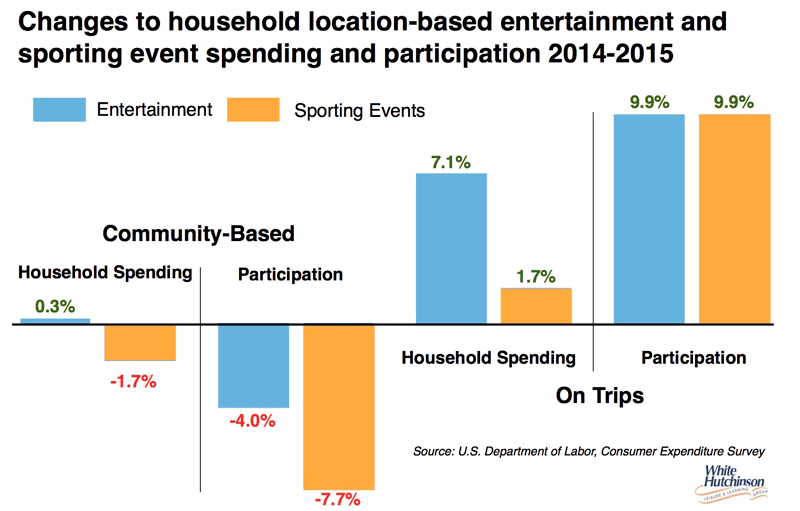 We promised more in-depth analysis of these trends, and here it is.

The trend for spending for admissions to sporting events on trips is similar; the increase since 2014 was basically across all income groups. However average household spending is also lower than in 2005, but only by 3%. For sporting event admissions, the top 20% of income households account for over half of all spending (51%).

For community-based entertainment, the lower 60% of income households saw slight decreases in 2015 while the top 40% experienced increases and now account for 72% of all such spending. 2015 average household spending was one-fifth lower (-20%) than in 2005, with the decreases the greatest for the lower income groups.

Spending for admissions to local sporting events saw the same trend, down for the lower 60% and up for the top 40% of income households who now account for 85% of all such spending. Average household spending is almost one-quarter less than in 2005 (-23%).

In summary, what this indicates is a trend we have been tracking and reporting on for some time. More and more of the market share for entertainment spending at different OOH venues is shifting to the higher socioeconomic households. Since trip and vacation entertainment spending is increasing while it hasn't in the local community indicates that people are seeking High Fidelity experiences, the ones you typically will find at trip and vacation destinations, the ones that cost more but are considered far superior and a great value.

In our increasingly experiential economy, consumers make leisure choices in terms of two key dimensions - experience and convenience. It's a trade-off between Fidelity, the quality of the experience, and Convenience - the ease of access in time, effort and money. The more Convenient digital screen-based entertainment and socialization becomes, the higher the Fidelity of an OOH experience has to become to compete and attract people. And as digital entertainment and socialization improves in Convenience, which it is doing at an accelerating rate, what used to be a High Fidelity experience is no longer considered High Fidelity and falls into what is called the Fidelity Belly, not a place any venue wants to find itself.