If you only optimize yesterday's business model, you're inviting disruption and obsolescence

It wasn't all that long ago that film canisters, taxi medallions, vinyl records and CDs, DVDs and video rental stores and book stores (among others) dominated their respective industries. Much of retail is now going down that same road due to the ecommerce disruption. We can thank these histories for this indispensable lesson: Survival in the 21st Century demands new business models.

Another variation of this lesson for existing businesses is this revised truism, If you keep on doing what you're doing, you'll keep STOP getting what you're getting.

But, if you're in the community-based entertainment industry (CBE), which includes FECs and bowling- and laser tag-based venues, you might say you aren't worried, as people will always go out. Well, there is definitely some truth to that. But that doesn't mean they will choose to go to where they're currently going, nor that they will go out as often, nor that they will spend as much money when they do go out.

And that is exactly what is happening in the 21st Century. Customer expectations and behaviors for out-of-home entertainment are changing dramatically as a result of disruptive digital technologies. Demographics and consumers' patterns of consumption and spending for entertainment are fast changing and as a result old CBE models are fast becoming obsolete and being replaced by new models that address the changing leisure and entertainment consumption landscape. Unfortunately, most existing CBE business and new CBE developers don't see this handwriting on the wall and continue to just make incremental changes to yesterday's CBE business models.

Back in the 20th Century, the world didn't change so fast. But then along came the Internet, then social media and then the smartphone. Due to their widespread adoption, we now live in an era of rapid change. Today we have digitally literate consumers of all ages spending more and more time with screen-based digital entertainment and socialization. Now we have virtual and augmented reality emerging as new digital platforms that will affect entertainment behavior and, as a result, expectations and consumption patterns.

All this consumer technology is rapidly shifting both socialization and entertainment from out-of-home to on-screen. And what that means is yesterday's CBE models are fast becoming obsolete, so obsolete that incremental improvements can't address the root causes of their obsolescence.

It used to be that CBE venues considered entertainment as the primary reason that consumers attended. Today, that thinking will only result in being left behind by a world and consumers who have changed and continue to do so at accelerating speed.

We now have way too many other entertainment options available on digital screens and in the home, and all are so much more convenient and less expensive, often free. Digitally literate consumers are just as comfortable socializing and being entertained on their screens as they are in the real world. Today there's far less reason or motivation to leave home for entertainment or to socialize, and the statistics prove out this sea of change of consumption. (see Growth of eLeisure article in this issue).

Tweaking yesterday's CBE business model for the modern leisure consumer is destined for failure. The industry's conventional wisdom and its paradigms don't fit with the times and will be even more of a mismatch in the near future. It now takes a completely new business model to attract the new digitally literate consumer with their new expectations and values.

There's now an emerging new business model replacing the traditional CBE, including FECs of all types. What this model does is place socialization first, food and drink second and the entertainment only comes in third. It's no longer primarily about the entertainment. In addition this new model addresses consumers' desire for new, unique and sharable experiences, experiences that are shareworthy on social media to gain social capital. The new business model targets adults, not families. And it targets higher socioeconomic households rather than the shrinking and discretionary expenditure challenged middle class that the older models catered to. These higher socioeconomic guests demand a much higher quality experience, including design, ambiance and hospitality. The vast majority of higher socioeconomic guests are college educated, so they are often seeking an experience that offers them the opportunity to discover and learn something new. We call this new business model a community leisure venue (CLV) to take all the emphasis off the entertainment. 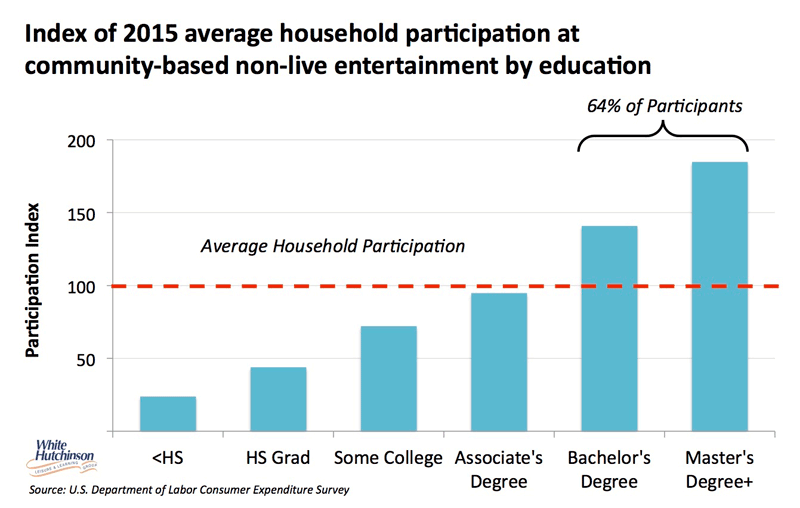 Households with an adult with a Bachelor's or higher degree are 40% of all households, yet account for 64% of all participants and 61% of all spending at community-based entertainment venues excluding live entertainment.

What has been the conventional industry wisdom for years no longer works as a sustainable model. Old school CBEs and FECs that offer a much more limited and shallower experience with an emphasis on entertainment are on the road to extinction while a new species, the CLV, is evolving to take their place. Yogi Berra's truism sure fits the times, “The future ain't what it used to be.”