Among America's many demographic and lifestyle shifts is a baby bust that just won't quit. Births peaked back in 2007 and have been on a decline, with the exception of a slight uptick in 2014. In 2015 there were 8% less children born than in 2007. 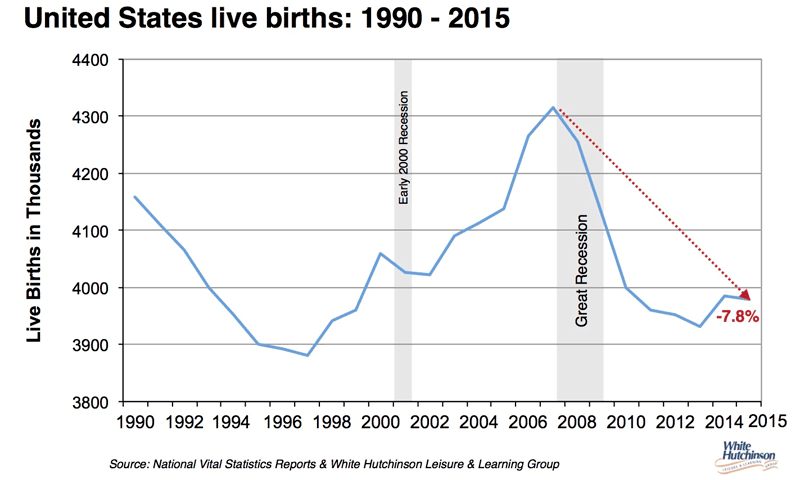 Back in 2000 at the turn of the Century, 14.1% of the American population were age 0-8. In 2015 it had declined to only 12.6% of the total population. Some of this decrease is being offset by population growth, but still a continuing long-term trend of a decline in the number births and percentage of the population who are children can be expected.

What exacerbates this trend for center's targeting children is KGOY, kids getting older younger. Children are entering adolescence at much younger ages. Whereas a number of years ago children's entertainment/edutainment centers might have attracted children up to age 10 or older, today the top age is around age 8, and in some cases it's more like age 7. That means the children's center's market is a smaller age segment of children than in the past. Digital technology and screen-based entertainment options are also having a negative impact on children and their families leaving their homes less often to visit a venue.

Children's centers require substantial investment, so they have to be sustainable long-term to be profitable. Many markets where a children's center might have been feasible a decade or more ago are no longer feasible markets due to a declining number of today's target age children. There are growing areas of the country with high concentrations of higher socioeconomic younger families with children where such a center is feasible, but they are becoming less and less every day.