The Dubai Mall, slated to open in late 2006 as the world's largest shopping mall with 9 million square feet and 1,000 shops, has signed an agreement for a $20-million, 80,000-square-foot Kidzania children's edutainment center.

Signing Ceremony for Kidzania and The Dubai Mall 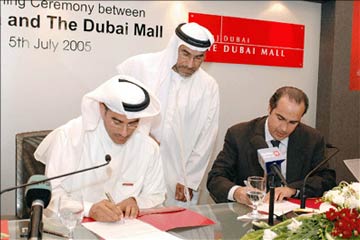 Kidzania targets children ages 4 to 15. It is a kid-sized replica of a real city, with streets, buildings, retail and vehicles moving around the city - all scaled down to children's size. It involves role-playing, and the children are encouraged to take on a variety of parts, from doctor and firefighter to banker and policeman. Kids wear the uniform and perform the role they are playing, which helps them learn the complexity of the adult world.

They make choices in realistic scenarios that could vary from a street scene to a shop or factory. Kids use kidzos, the official currency of Kidzania, with which they earn a salary and are able to buy goods and services. Thus, they learn the value of money, just as in real life.

The scenarios effectively enable them to learn what the roles involve and increase their knowledge not only of the professions, but of how to adapt to different circumstances.

Ibrahim Al Hashemi, Executive Director for Retail for Emaar Properties, the mall's developer, said, "When Kidzania first approached us, we could not have imagined a better match. It fits perfectly with our plans for offering innovative activities to round out the retail experience."