Can you hear me now?

It's hard to imagine that there is anyone in the U.S. who hasn't watched the Verizon television commercial with the Verizon man traveling throughout the country speaking into his cell phone asking, "Can you hear me now?" Obviously, being heard is important to a lot of people.

However, we often wonder about a lot of location-based entertainment (LBE) facilities and restaurant. If being heard is so important -- important enough for a major national advertising campaign that cost millions of dollars -- then why do so many owners have facilities that are so darned loud you can't even conduct a conversation? Yes, we can understand this at some singles' facilities, where patrons may want a loud environment so they won't be judged on their conversational skills. Or perhaps in a nightclub that wants to exude high energy. But when it come to most destinations, loud is just counterproductive to what the experience is supposed to be all about - going out and having fun together, whether it is dining and socializing at a restaurant or having a good time and socializing at an LBE. The key word for almost all these experiences is socializing. And socializing means having conversations. Can you hear me now?

Earlier this year, The Washington Post ran an article about the noise in many Washington, D.C. restaurants. In the article, the newspaper said, "Noise. It's what determines many people's choice of a restaurant. Sometimes it is more important than either the food or the cost."

We have taken sound readings at a large number of LBEs, and for the vast majority, we find sound levels that are 90 decibels and higher. That is loud, way too loud to be able to conduct a conversation without raising your voice level.

Just to give you some benchmarks, here are some typical sound levels:

So, to put it in perspective, many LBEs are as loud as a subway train. Keep in mind that 85 decibels is the maximum sustained sound level permitted by OSHA for workers over a typical workday without management having to provide hearing protection. People build cars in factories that are less noisy than many LBEs. Can you hear me now? 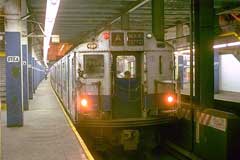 Many LBEs are as loud as a subway train.

Noise levels have a direct psychological and emotional impact on both LBE and restaurant guests and their staff. Loud noises induce physiological stress in the body, increasing adrenaline flow, blood pressure, and heart rate. And most people aren't consciously aware of what has happened to them. They just feel stressed, anxious, cranky and ill at ease.

It all started back in caveman days, when loud sounds often meant the rapid approach of a huge, hungry, big-toothed critter. The body, then, programmed itself to fight or flee after hearing loud sounds. Humans who weren't stressed by noise probably became kibble for a sabertooth tigers. Eventually, only people with the sound-activated stress response dominated the gene pool. Today, sabertooth tigers are gone but that involuntary response lingers, causing us to jump at loud noises like car horns or sirens.

So would you want to spend the day in an environment that generated the fight-or-flight response? Of course not, and neither do your guests. Those that do stick it out are stressed, irritable, and grumpy. They don't have fun, and they don't plan to return. And your staff members, who have to stay, are just as miserable. Service, productivity, and even safety levels deteriorate.

Children accompanied by parents constitute the major share of LBE guests. Most of the parents are in their 30s to late 40s. Men, who lose their hearing faster than women, already are having a rough time making out speech in loud rooms or environments where noise reverberates, bouncing around and not being absorbed. The problem is even more severe for elderly guests such as grandparents. If a child has to scream to Grandma that he has to . . . well . . . go, the value of the visit is diminished. And few things are more frustrating to staff and guests than to have to strain to understand what someone else is saying. If that someone is a performer or animatronic character, you've lost the entertainment impact you paid for. If it is the wait-staff, it could result in incorrect orders. And if it's the family or group that want to talk to each other, you've lost one of the primary motivators for visiting your LBE, which is socialization. Bottom line: Noise costs money. Can you hear me now?

Our company has conducted extensive research with consumers and guests of existing indoor LBEs. The research includes mail, phone and intercept surveys, and focus groups of both children and adults. These people, in response to open-ended questions with no prompting or prior mention of acoustics, often mention loud and irritating sound levels as something they dislike about the LBE they visited. And the irritating noise level is mentioned by children, some as young as 5 years old, as often as by adults.

So what's the answer to not having guests act like there is a sabertooth tiger about to jump out of some game or from under the table? It's to be aware of the importance of quality acoustics to the guest experience, and then design accordingly. What that means is to design for acoustics from day one, rather than try to solve the problem after the fact.

Unfortunately, "after the fact" seems to be more the standard operating procedure.

McCormick & Schmidt, a well-known upscale restaurant chain, recently opened a new restaurant concept in Kansas City, Missouri, called M&S Grill. It is meant to be at price point less expensive than a McCormick & Schmidt restaurant and does not focus on seafood. About one month after it opened, we tried it out. The food was good and reasonably priced, but the place was so noisy that not only couldn't we have a conversation without raising our voices, but the waiter couldn't hear us clearly when he was taking the order. And at the time, the restaurant was only about two-thirds full.

We wrote McCormick & Schmidt about our experience, explaining that as good as the food and service were, we would not return as the noise kept us from having a conversation. They did write back, saying they realized they did have a problem with the acoustics, and they had asked their architects to see what could be done to correct the problem.

It is interesting how architects will make sure the lighting is right, the air conditioning works correctly to create the right environment, but they are deaf to the importance of acoustics. If they cared about acoustics, they would hire acoustic engineers as consultants, no different than hiring lighting designers or mechanical engineers.

Typically, there are two major sources of noise in an LBE. The first is mechanical, including games, rides and attractions, and the building's mechanical systems, such as the HVAC system. The second source is human, the noise generated by guests.

Not all noise is bad. Guest noise is good, provided the space is not too reverberant, meaning the noise bounces back and forth. The din of a busy restaurant can act as a privacy screen that blocks out conversations at adjoining tables, provided the din is not so loud that the diners at the same table have to raise their voices to be heard. Mechanical noise is bad. Of course, some of the fun is the sound of the mechanical bells and whistles, or the clatter of the roller coaster coming down the track. What's important is not to eliminate mechanical noise, but to keep it at a low volume through control of the sound level at the source and through sound-reduction systems. With a proper balance and level of sound, guests can have conversations without raising their voices, won't succumb to noise fatigue, and will stay longer, have more fun, and be more likely to return.

It's never too late to improve the acoustics in an LBE or a restaurant, but it sure costs less and works better when good acoustics are built into the original design. Good acoustical design is not necessarily expensive. If acoustics are integrated into the design from the very beginning, from conceptual design to construction documents, it rarely will add more than 1% to the total cost of a facility, and frequently much less. After the fact, you can count on spending more to accomplish less.

At White Hutchinson, we take acoustics very seriously, as we consider it our job to create a guest experience for our clients' facilities that will please guests and have them return (unlike our experience at M&S Grill). An acoustic engineer is an integral part of our design team, and we look at the implications that design has on the acoustic environment from day one. Our projects received recognition for their good acoustics, and as a result, our clients are much more successful.

Here's what the San Jose Mercury News said about Bamboola, the children's edutainment center we produced in San Jose, California, in 1997:

"At Bamboola, they add supervision by khaki-clad staffers, a variety of choices for different ages, an educational overlay and a comfortable place for adults... This is where Bamboola's well-crafted design makes it stand out from places with similar activities... Bamboola's designers, White Hutchinson Leisure & Learning Group of Kansas City, create a place where adults can take their kids without being driven crazy by the noise, the dreary "are we having fun yet?" atmosphere and the lack of places to sit down.

"This is smart. This is very smart. They did this through careful attention to basic design.

"On a small scale, Bamboola did what Walt Disney did 42 years ago. Walt Disney took the hopelessly tawdry, sleazy amusement parks of the 1950s and reinvented them as clean, comfortable, wholesome Disneyland. [White Hutchinson] took the tawdry, noisy fun centers of the 1990s, added a dash of the Children's Discovery Museum, and created Bamboola... It has taken the pleasure and comfort of its customers into account with intelligence and care. It uses design to make a better product and a better environment."

There are several morals to this story. First, neither the LBE or restaurant industries pay enough attention to acoustics, too much of which can turn potentially happy guests into miserable, grumpy people who want to get the heck away from brain-thumping noise and never return. Second, unless you pay attention to acoustics early in the design process, it's going to cost more to have less of an impact on noise levels after the fact. Our company wouldn't consider planning an indoor LBE without careful attention to acoustics, any more than we'd design an LBE without making sure the air conditioning system was properly sized. And that is just good business. Can you hear me now? Good!