You may not have noticed it, but a major food trend has skyrocketed in importance - whole grains. Whole grains got a major boost when the United States Department of Agriculture released its new ChooseMyPlate dietary guidelines in January 2005 that give specific recommendations for eating at least three servings of whole grains a day - half of daily grain consumption. Now, a whole cadre of food products incorporating whole grain has entered the market. Foods range from whole-grain cereals to whole-grain breads to whole-grain tacos and pizzas.

The Atkins and low-carb diets, which have waned in popularity, may have in some ways given whole grains a boost. "Grains got a lot of attention during the low-carb diet trend," says Cindy Harriman, Director of Food and Nutrition Strategies for the Oldways Preservation Trust/Whole Grain Council. "As the trend fades, the focus remains. The public is starting to recognize that there is a difference between good carbs and bad carbs, good fats and bad fats, refined grains and whole grains. The true irony is that the low-carb trend refocused attention towards foods that are nutritionally sound."

Harriman goes on to explain, "Years ago, manufacturers decided to use refined grains, as opposed to whole grains. Refined grains are easier to work with and have a longer shelf life. They are also more immediately appealing to consumers." 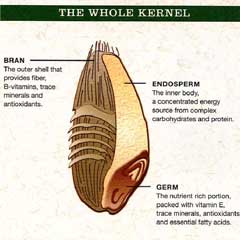 Whole grain flour contains the entire grain seed or kernel, which has three parts: the bran, germ and endosperm. Refined grains are milled, a process that removes the bran and germ. This strips the grains of their dietary fiber, iron and many B vitamins. Some refined flours are enriched to add back some of the B vitamins.

Whole grains are really taking off now that mills have developed a process to make whole-grain white flour versus the traditional dark color of whole-grain products. This has allowed the formulation of whole-grain foods that look and taste the same as the older white refined flour foods, such as white bread.

ConAgra Foods, one of the nation's largest food makers, was the first to introduce a white whole-grain flour that behaves like and has a finished product look for white flour. The company spent eight years and millions of dollars developing Ultragrain White Whole Wheat. The grain is bred for its properties and is not genetically modified.

There can be little doubt about the growing popularity of whole grains. General Mills has converted all its cereals to whole grain. Sara Lee has introduced a whole line of whole-grain baked goods. Thomas' English Muffins are now available in whole grain. Pepperidge Farm has unveiled a whole-grain based portfolio of breads, English muffins, frozen breads and even Goldfish crackers. Panera Bread, the rapidly expanding and highly popular fast casual café and bakery, has introduced five different whole-grain breads, including a whole-grain baguette that is an option with salads and soups. Now, even Wonder Bread uses 100% whole white wheat flour.

Whole grains are also becoming more popular due to another food trend. "Industry is recognizing that while whole grains may be harder to deal with, the public mindset is shifting towards fuller, more healthful flavors that include whole grain," says Harriman.

For years, a number of pizza operators have been offering partial and 100% whole-wheat pizzas. With the new focus on the healthy benefit of whole grains, it won't be long before whole-grain flour will find its way into a lot more pizzas, which is sure to further increase America's love affair with the pizza.