100th Anniversary of the Hamburger 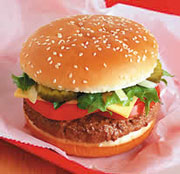 Bragging rights most likely belong to Texas for the creation of the hamburger. Most hamburger historians (Is there really such a college degree? Who knows, today it probably isn't improbable) attribute the creation of the hamburger to Fletch Davis, also known as "Old Dave," from Athens, Texas. In 1904 he decided to try something new and took some raw hamburger steak and fried it up on a flat grill until it was a crispy brown on both sides. He then placed the meat patty between two thick slices of homemade toast and topped it with a thick slice of raw onion. Old Dave offered it as a special to his patrons to test if they would like it. Word quickly spread that Old Dave had cooked up the best darn sandwich in Texas. So, at the urging of his friends and family, he opened up a concession stand at the amusement area, known as The Pike, at the St. Louis World's Fair Louisiana Purchase Exhibition in 1904 and began selling his hamburger creation sandwich.

Of course, when it comes to history, there will always be contradictory accounts. Here are some of the minority opinions of the beef on the bun's creation: 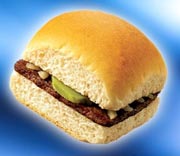 When it comes to the mass distribution of hamburgers with the invention of the hamburger chain restaurant, that credit goes to Walter Anderson, a fry cook from Wichita, Kansas, who developed buns to accommodate the hamburger patties. The dough he selected was heavier than ordinary bread dough, and he formed it into small, square shapes that were just big enough for one of his hamburgers. He quit his job as a cook and used his life savings to purchase an old trolley car and developed it into a diner featuring his hamburgers. In 1921, Anderson co-founded White Castle Hamburger, the oldest continuously running hamburger chain, with Edgar Waldo "Billy" Ingram. The tiny hamburgers sold for 5 cents back then.

In 1934 the Wimpy Burger appeared. Named for Popeye's hamburger eating character, this burger went for the upscale market at 10 cents a burger. However, all 1,500 restaurants were closed down in keeping with the founder's wishes when he died in 1978. The 1930's also saw the arrival of the drive-in. Drive-in's changed the landscape of burgers forever by allowing diners to remain in their cars and therefore laying the foundation for the concept of drive-up service that remains the stronghold of the fast food industry.

By the late 1930's, Bob Wain of Bob's Big Boy introduced the first double patty burger. It wasn't until 1948 when the first McDonald's opened that the modern fast food hamburger restaurant revolutionized the way we eat. This first McDonald's didn't sell hamburgers though; it was a hot dog stand. Ray Kroc, who later created the McDonald's empire, joined the team in 1954. By then hamburgers had replaced the hot dog. The Big Mac was introduced in 1968.

If you doubt the importance of the hamburger on American culture, then consider this: 40% of all sandwiches sold in restaurants are hamburgers. Americans on average eat 3 hamburger's a week. And McDonald's alone has sold 12 hamburgers for every person in the world. So over its history from when the hamburger was first invented, whenever that might be, it has gone from being just a sandwich to becoming its own economy.