It's that time of year for 2017 predictions. So we thought we'd join the bandwagon and share with you a few of our predictions for community leisure venues (CLVs), including what are often referred to as family entertainment centers (FECs).

Food and drink at the forefront

It used to be in the earlier days of FECs that food and beverage was not all that important, as the focus was on the entertainment attractions. A lot has changed since then. What we are seeing is that food and drink has moved up to anchor status as a critical ingredient to creating a high quality social experience, social actually being the primary driver of attendance. In 2017 and beyond, the quality and variety of F&B will become increasingly important to generating repeat business and financially viable per capita expenditures.

If you have any doubts, just look at the tag lines of these CLVs. It's not by chance that food and drink is listed before entertainment and why the word social is starting to appear as well in the names.

Bricks-and-mortar retail and malls are in trouble. Ecommerce is starting to eat their lunch and take away their sales. Big box and department store are closing. Millions of square feet of retail space have gone dark. Macy's just announced the closing of 68 of their department stores and Sears plans to shutter 150 of theirs. Millions more square feet are yet to follow. Landlords are looking to fill empty space and looking for new anchors to drive shoppers to their centers so existing stores will prosper. As a result, many mall and shopping center owners are looking for entertainment venues to fill empty large spaces and serve as anchors. And to get these deals, they are offering very attractive rent terms. And the attractive rent terms are attracting a lot of entertainment developers.

As a result of landlords chasing entertainment and entertainment developers being attracted by sweetheart deals, we see a high probability of over development in many markets, and as a result the ultimate failure of many of the entertainment venues.

At-home virtual and augmented reality is slowing catching consumers attention for socialization and entertainment, both at-home and in the world at large. The success of augmented reality (AR)-based Pokémon GO is an indication of how fast the technology can catch on. And that was a very crude version of AR. We will be seeing more consumers engage with AR as the technology and content improves. We will also be seeing the adoption of at-home virtual reality (VR) for socializing, entertainment, gaming, sports and culture (see article this issue Is new virtual reality disruption to out-of-home leisure coming?)

Iconic technologist Kevin Kelly has observed that the maturing of VR and AR technologies heralds a fundamental shift: from an Internet in which information is the basic unit of currency, to one in which experiences are. Those digital experiences will quickly come to carry a status-weight equal to ‘real' experiences, if not become more sought-after and prized. Why? Status has always been defined by scarcity and abundance. In a world with material abundance, the experiences people choose form an increasingly important part of their identity and social capital.

In a truly infinite and boundless virtual world, the usual physical limitations of cost, accessibility and personal capability no longer apply to experiences, making consumers' time the only scarcity.

The growing consumer adoption and desire for AR and VR experiences will become new competition for CLVs and make it even more challenging to attract consumers out of their homes and away from their screens.

We're already seeing such a trend with an average household increase in spending for digital experiences and a decrease for real world experience, even before the adoption of VR. 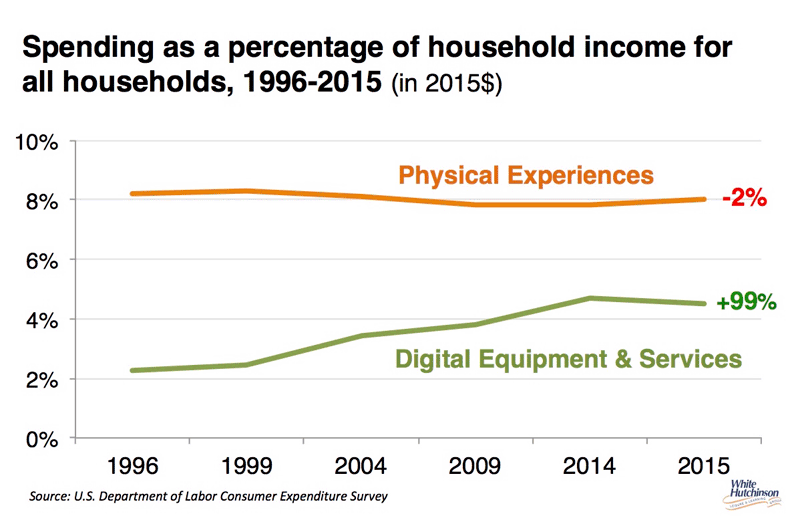 It is impossible to predict where the shift from physical to digital and virtual will settle.

For years, the declining condition of old bowling alleys and the focus of many on league bowling has been a turn-off to people looking for a location where they could go out and have a great social experience with friends while eating and drinking and playing an interactive social game.

That is slowly changing as more upscale social community leisure venues are being developed that include bowling. People are finding that there is an attractive alternative to those old grungy bowling alleys.