The importance of food and beverage

In our brand development, design and consulting work with clients, as well as the presentations our CEO makes at industry conventions and at Foundations Entertainment University, we constantly get very negative reactions to our advice that entertainment-oriented venues need to have great food and beverage, often what we call destination dining, where the food and beverage (F&B) is as much a draw as the entertainment. This cropped section of the famous painting “The Scream” by Edvard Munch pretty well exemplifies the reaction we often get. 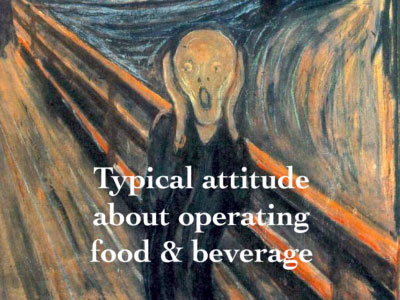 We hear comments such as:

You can get the drift; not a very positive attitude about F&B.

The first thing we point out to clients is that when you look at the history of the FEC and location-based entertainment (LBE) industry and those concepts that have stood the test of time, the successes have generated around 50% of their revenues from food and beverage sales. The two most recognized examples are Dave & Buster’s and Chuck E. Cheese’s, both over 30 years old. In fact, in the restaurant industry, when they include CEC as one of the restaurant chains analyzed for performance, CEC stands out as one of the most successful with an EBITDA in the mid-twenty percentages. Few, if any, predominately entertainment-type LBE centers (with just a snack bar at most) have survived, let alone prospered, that long. Remember, the investment in an LBE needs to have long-term profitability, not just be some flash-in-the-pan that fizzles out after a few years (as all too many do).

When you look at the financials for the food and fun concepts, those with around 50% food and beverage sales, their sales per square foot far exceed that of predominately entertainment-type LBE centers, typically by a factor of three or four.

Good food, destination food, drives repeat business, the attendance every LBE needs to succeed. The average American eats at a restaurant almost four times each week (around 190 times a year depending on which research study you look at). Compare this to the most popular form of location-based entertainment in America, going to the movies, which the average American does only 3.9 times a year or slightly less then once every three months. In other words, Americans walk in the door of a restaurant 48 times more often than they buy a movie ticket.

So, if the LBE has good food, instead of leaving at mealtime, the customer might stay. More importantly, when it is mealtime, people will come for the food and stay for the fun, increasing entertainment attendance, revenues and profits (an important part of the formula for profitability by maximizing attendance at all hours when an LBE is open).

One of the many myths in the LBE industry is that when a group of people visits an LBE, they are coming primarily for the entertainment. They are really coming for the total experience, of which socialization is the primary driver. The entertainment gives them a way to socialize together. Research by the National Endowment for the Arts has found that socialization is the primary reason people visit dance performances, music concerts, plays and arts and craft shows, it’s not for the entertainment. That is a secondary reason they attend. As humans we are hard-wired to seek out real-world social interactions and connection. As the evolutionary anthropologists will tell you, it was living in a family and tribe with all the social connections that bonded them that enabled our species to survive in its earliest days. That desire for socialization is hard wired into our genetics and our brains far stronger than the desire to have fun. If you have any doubt, just look at the popularity of FaceBook, the real world social equivalent in the digital realm. Another example is the popularity of video games, which, studies have shown, is due to their socialization opportunities, not the game play itself. 80% of people play video games primarily for the socialization.

Real world socialization still trumps social media. Recent research by Ipsos Global found that 84% of Americans would rather talk in person than on-line and 80% would rather go to a party with friends then meet on-line. Research by Global @advisor found almost identical results. 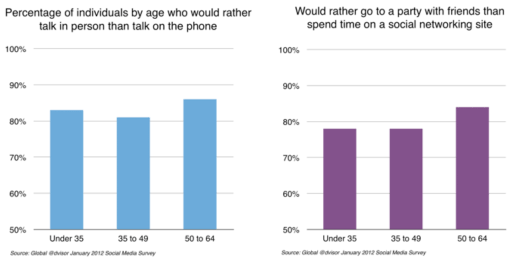 Sharing food and beverage, dining and drinking together, is one of the best tools for creating social interactions. Setting aside drive-thru and fast-food restaurants, which are really about getting refueled, most families and groups go out to dine for the social experience as much as, if not more so, than the sustenance. In fact, Americans seem to have a hard time socializing unless they have a drink in their hand, are eating something or rolling a ball (think about bowling, golf, miniature golf, billiards and even skeeball) or playing together. If you add F&B to

interactive group entertainment, you have the optimal socialization environment. It’s really getting back to early man siting around the campfire, sharing food and telling stories. We’re hardwired to seek out the equivalent in the modern world (Ever wonder why we like candles on dining tables? It’s our modern day equivalent of the campfire.)

In today’s digital world of both at-home and mobile social media and entertainment, LBEs are dealing with a completely new form of entertainment competition that is eating into their market share. LBEs are fighting for a share of disposable leisure time more so than a share of disposable dollars. It’s a zero sum game when it comes to the average American’s five hours of leisure time. The digital world is eating into both the use of leisure time as well as taking away many of their disposable dollars (check out our articles listed at the end if you have any doubts about this).

In fact, trend forecaster Faith Popcorn, who identified the trend she coined as cocooning back in 1981 has identified a new level of super-cocooning that is negatively affecting all away-from-home dining and leisure venues. "Everybody is nervous, really nervous," says Faith Popcorn, "I think we are looking for protection. Almost like the Jetsons, we want to walk around in a little bubble. We are moving toward that." It’s the continual increasing accessibility and decreasing cost of digital technology (what is called increasing Convenience) that makes the super-cocooning of home entertainment so appealing. Super-cocooners spend twice as much on electronics as the average American with home Internet access. And they skew younger, with the highest percentage (1/3) in the highly sought after 25 to 34 age group of Millennials. 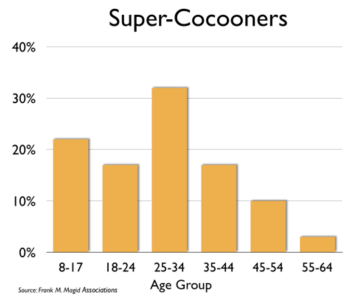 So today, to lure people out of their homes, out of their cocoons and to compete with their many digital leisure options, LBEs need to up the ante, to raise the bar, and offer an even more appealing High Fidelity (the quality of the experience, both its tangible quality and its perceived quality or aura) leisure experience. And this brings us back to that “Scream”-worthy subject of food & beverage, because the one thing you can’t do on the Internet is eat. And that makes quality and destination food and beverage more important than ever as a competitive strategy.

And today, High Fidelity food and beverage is far different than it was just a few years ago. We live in a foodie culture, where what are called our “flavor profiles” are far more sophisticated. We eat all varieties of global cuisine. We want local, organic, freshly prepared, the list goes on and on. Here’s just one small example using popular pizza. The Figlio Wood Fired Pizza restaurant in Columbus, Ohio’s best selling pizza is not some traditional pizza such as pepperoni, but rather Pear & Brie Pizza made with D’Anjou pears, French Brie cheese, arugula, prosciutto with an apricot-chili drizzle. If you check out the menus of the new successful upscale hybrid bowling centers, you will find a two-sided, contemporary, menu that includes comfort food along with more contemporary sophisticated offerings. For example, Pinstripes, a hybrid bowling and bocce center, offers on their menu:

Get the point? It’s not longer nachos and cheese and hot dogs. Today even when you offer hamburgers, they have to be high quality and gourmet. To compete today with digital at-home and mobile digital entertainment, the food and beverage needs to be just as high in quality as the entertainment if the total experience is to be High Fidelity. Otherwise, there is the Convenience alternative of the large screen HDTV with Blu-ray or a sports channel and pizza delivery.

Maybe we have started to convince you of the importance of F&B, but what about the profitability of F&B? After deducting the cost of goods sold and labor, F&B sales can generate a 40% or greater profit margin. Now F&B does have a lower profit margin due to a higher cost of goods sold than entertainment (which is basically confined to only redemption prizes when there is a gameroom) and the labor cost can be a little higher. So many people argue that F&B is not very profitable. But what they miss is that the F&B floor area produces multiple more times the sales per square foot as entertainment, so a smaller profit margin multiplied by much greater sales can equal or exceed the profit per square foot entertainment alone generates.

Restaurants generate significant EBITDAs. Here’s a sample of both operating margin percentages and EBITDAs for some of the restaurant chains as well as Chuck E. Cheese’s and Dave & Buster’s: 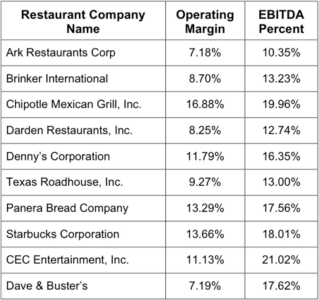 Combining F&B and entertainment also has high appeal in our time-pressured society. Today, people, at least the higher-socioeconomic who have the disposable income and account for the majority of location-based entertainment spending, value their limited disposable time more than their disposable dollars. They are willing to spend extra money to save time. So combining destination F&B with entertainment offers one-stop shopping for a good time out for a couple, family or group. You don’t have to travel to one destination to eat, then take time to travel to another destination for entertainment. 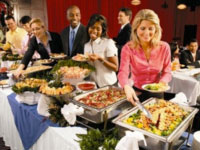 Another reason great F&B is so important to success is catering food for groups. Significant group business is critical to profitability. Community-based venues need to generate 30% or more of their revenues from groups. The quality of the food is a major factor in where corporate and other groups will chose to book their affair.

When we talk about F&B, we can’t ignore alcohol. And when to talk about alcohol we first need to dispel the common myth in the industry that you should design for families.

To design for adults, you need a bar. The majority, almost three-quarters of adults age 18-54 drink alcohol an average of 4.2 drinks per week.

If you have a bar, you will get more adult parties, corporate groups and walk-in adults. You will still get families during the daytime and early evening as most adolescent and older children would rather visit an adult venue than a family one. In addition you will get adults in the later evening and into the night generating more late night business than a family-oriented center gets. With destination F&B, you will also get adults for lunch. And most importantly, if you design for adults and have a bar, the per capita sales and sales per square foot will be much higher and you will be more profitable than if you design for families.

Since it is so important to success in today’s expanding entertainment competition, we’ll have more coverage on food and beverage in upcoming issues.