The shift of consumer values and spending, a trend that first emerged over a decade ago in most of the developed world and that the Great Recession’s impact expanded to a larger share of the population, shows all indications that it is here to stay and is having a disruptive impact on brick-and-mortar stores and shopping malls. The trend has many names. John Gerzema and Michael D’Antonio in their book Spend Shift call it the spend shift movement. The Hartman Group calls the new resulting consumer the grounded consumer. Trendwatching.com calls them transumers. Whatever name you want to call the trend and the consumer it has defined, most consumer researchers agree it has the following traits:

Consumerism is moving from possessions to experiences, a trend identified in its infancy back in 1999 by Joe Pine and Jim Gilmore in their book The Experience Economy.

Gerzema and D’Antonio’s research found that 77% of the American population agreed with, “How I spend my time is more important than how much money I make.” They also found that more than two-thirds of the U.S. population “now prefers a pared-down lifestyle with fewer possessions and less emphasis on displays of wealth.”

A January 2012 worldwide survey in 25 countries by Ipsos OTX found that 56% of people would rather buy a cool experience such as season tickets to a music series or a five-course meal at a premier restaurant rather than a cool product such as a sleek new computer or a high tech new espresso machine. There was variation across countries, from a low of 36% of French preferring the cool experience to a high of 70% in Turkey. Approximately two-thirds (64%) of United States consumers prefer a cool experience rather than a cool product. 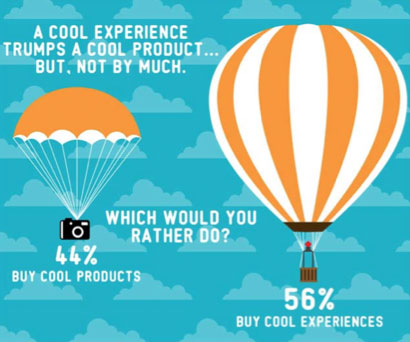 Within the U.S., the percentage of people preferring a cool experience is even greater for those with higher incomes (68%) and higher levels of education (70%). Women value experiences slightly more than men (66% versus 62%). 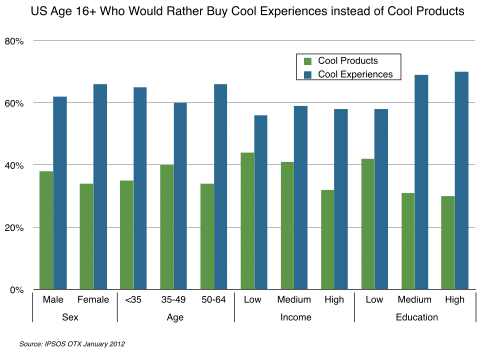 Not only are experiences starting to win out over buying stuff, but also when consumers do buy stuff, less of it is being bought at physical world bricks-and-mortar stores. The digital world, the Internet and all the ways it can be accessed, is gaining market share, accounting for approximately 11% of all non-grocery retail purchases in 2011. Clothes sold on-line now represent about 13% of the domestic market. The digital world market share in the U.K. is even higher. According to Forrester, on-line sales are projected to grow at a double-digit 10% pace over the next five years. On-line shopping is significant and growing in most areas of the developed world.

The digital world has also eliminated physical products that once required bricks-and-mortar space in retail stores. Now we download or stream music, videos and films instead of buying CDs and DVDs. Electronic books are gaining in popularity. Whole categories of retail stores such as video rental and bookstores are on the verge of extinction. Remember Tower Records and Borders? They are examples of the digital world taking over both the content and distribution of media.

None of this bodes well for malls, which traditionally depend on consumers coming to purchase goods as their primary driver of traffic, or as they say on the other side of the Atlantic, to generate footfall. Consumers’ feet aren’t marching to retail stores as often as they once did, both due to a change in values when it comes to material goods and to the convenience of ordering on-line. 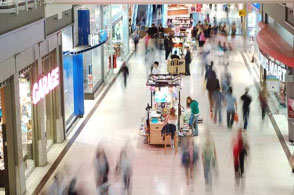 Department stores have fallen out of favor with shoppers who have shifted much of their spending to big box retailers. So department stores are no longer the strong anchor tenants generating the traffic that a mall or the new lifestyle and town centers need to create sufficient business for the other smaller retail stores. Many developers now realize their mix needs to include a variety of experiences as the new anchors. This of course includes the old entertainment standby, the cinema. However, with movie attendance on the decline, movie theaters are not as strong traffic generators as they were in the past. Developers are increasing the percentage of leasable space for destination restaurants as part of the new anchor mix. There are also some experiential retailers such as the Apple Store where a visit is as much, if not more so, an engaging entertaining and social experience as it is a visit for a purchase.

Often, the cinema, restaurants and experiential retailers do not make a mall or shopping center competitive enough to attract consumers in the numbers needed in the overstored retail environment. The new component of the entertainment mix at malls and lifestyle and town centers is entertainment venues themselves. Today it is all about “come to the mall to be entertained, and when you do, maybe you’ll make some retail purchase as well”.

In reality, this is not a new formula for success. West Edmonton Mall and Mall of America both have large entertainment anchors. Outside of America in many parts of the world, including the Middle East where weather limits outdoor leisure, malls are the predominate form of out-of-home leisure. To be competitive, every large mall has a major family entertainment center, often owned and operated by the mall owner.

In America we are seeing a trend of mall, lifestyle and town center developers seeking entertainment venues to be part of the mix. Unfortunately, there aren’t that many entertainment chains that can just be plugged in a space like you can with a retailer. There are a number of new upscale bowling centers chains that are being courted by mall owners such as Lucky Strike and Splitsville. But they are few in number. We are seeing what might be the beginning of a trend of mall and shopping center developers funding and operating their own entertainment venues. This runs counter to the traditional shopping center development mentality in the U.S. of only leasing space and maintaining the common areas. However, in today’s world where experiences are winning out over stuff, mall and shopping center developers need to understand that they need to shift to a new business model if they want to be successful, the business of creating destinations that have to be a mix of entertainment and retail. And that means they will need to become involved in the production and operation of entertainment venues and entertainment experiences if they want to differentiate their centers from the competition and be a location that consumers, and as a result, retailers and restaurants, will desire.