Last month I was in Dubai to work with one of the Middle East’s largest mall developers on the 108,000-square-foot indoor and 4-acre outdoor family entertainment center for a new mall they are developing in the Arabian Gulf region. As part of the visit, I was able to visit all Dubai’s major malls and the entertainment centers they contain. In terms of the mall’s entertainment centers, little has changed since the last time I visited them two years ago. The only exception is that the Cite’ des Enfants children’s museum in Mirdif City Centre originally branded after the children’s museum of the same name in Paris no longer carries that brand. It is now named Little Explorers.

There were a few more vacancies in the major malls, however none were significant. What was most fascinating to me was how many construction projects that were brought to a halt by the Great Recession and its resulting meltdown of Dubai’s residential and commercial real estate are still just sitting there, unfinished with no work underway to complete them. There are 291 projects in various stages of completion on which work is still stopped (click here to see a listing). Amazingly, most of the construction cranes are still sitting there with the unfinished buildings. The value of stalled construction projects throughout the U.A.E. is reported to be $958 billion, the vast majority of which are in Dubai. Part of the problem is that based on the depressed value of real estate compared to pre-recession levels, it will cost more to finish many of the projects than they will be worth when finished. 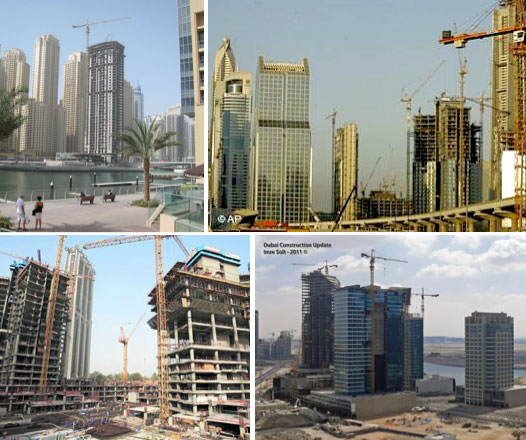 And remember all the hype about the Dubai manmade islands being developed off of the Arabian Gulf?  At least one of them, the World, an archipelago of islands designed to resemble a map of the planet, is sinking back into the sea. The islands were intended to be developed with bespoke hotels and luxury villas only accessible by yacht or motorboat. Only one island has been developed – Greenland – and that one as a showplace owned by the ruler of Dubai. 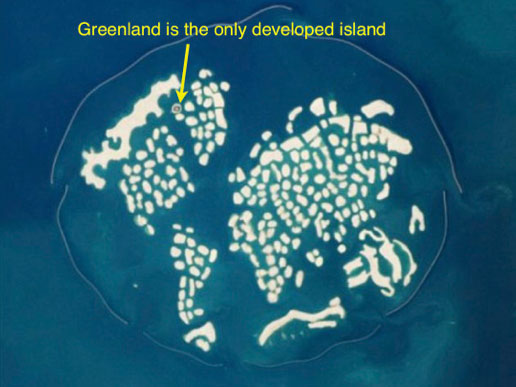 The World archipelago of islands off the coast of Dubai

While in Dubai, I couldn’t resist going up Burj Khalifa, the world’s tallest building at 2,716.5 feet (828 meters). That’s over one-half mile high. You should remember Burj Khalifa from the recent Mission Impossible Ghost Protocol movie. That’s the movie where Tom Cruise had to climb part of the skyscraper. 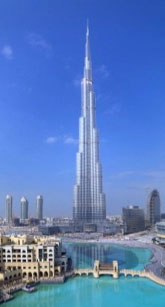 You can see a long ways from the observation deck. They had augmented binoculars you could look through, with a charge of course. When I switched them to historical mood, all I saw was sand or water depending which direction you looked. When you think about it, the transformation of Dubai and many other cities in the Middle East is amazing. In the early 1950’s, the only mode of transportation in Dubai was camel!

I hope you enjoy this issue of our Leisure eNewsletter. We’re always delighted to hear from our readers if you have any comments.