"There's a gigantic new generation of 'gourmet' diners out there, and they're going to have a dramatic impact on every facet of the restaurant business. When it comes to food preferences, restaurant and menu selection and their degree of culinary sophistication, today's Food Channel-viewing, restaurant-spoiled young adults are a sharp contrast to any other generation to come before it.

"Their numbers alone are staggering. The nation's 40 million 18- to 24-year-olds are the most food-savvy generation in history and will set the pace for the 73-million strong Gen-Y group, age 7 to 24, behind them. And although slightly older and less adventuresome, Gen-Xers, age 25 to 34, have an . . . openness toward other cultures [that] has also made them a prime target for gourmet, premium and ethnic foods."

We couldn't have said it any better ourselves. That's why we have quoted Dr. A Elizabeth Sloan, president of Sloan Trends & Solutions, a highly respected California-based consulting firm that offers food marketers trend tracking and predictions, from her recent article in Flavor & The Menu journal. 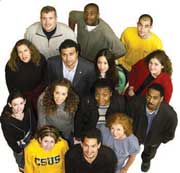 These young adults are core diners. According to the Food Marketing Institute, about one-third of those ages 15 to 24 eat their evening meal at a restaurant three or more times a week. That is almost double the frequency of any other age group. The NPD Group reports that 18- to 34-year-olds, the core market of families with younger children, account for 37% of traffic in fast-casual restaurants, 30% in fast food restaurants, 29% in casual-dining and 22% in mid-scale restaurants. Market research firm Technomic reports that members of the Generation Y (also called Millennials), which it defines as age 27 and younger, eat out an average of 24 times a month, almost once a day. A National Restaurant Association survey found that 75% of 18- to 24-year-olds agreed with the statement, "It's no longer a big deal to eat out." This represented the highest percentage in responses of all the age groups surveyed.

Many young adults don't even cook at home. Phil Lempert, a food trends expert known as the 'supermarket guru,' says, "The bottom line is this is a generation that never saw their mothers cook. They think cooking is about assembling meals. They never saw the joy of cooking. They haven't had the family dining experience at home, so they're needy of dining with friends."

Tim Zagat, founder of the popular Zagat Survey, calls the dining spots many twentysomethings and younger Gen-Xers are attracted to BATH restaurants, his acronym for Better Alternatives to Home - casual, modestly priced eateries with hearty, homey food. BATH restaurants include simple ethnic establishments, pizza and pasta restaurants and such chains as Applebee's, Chili's, Boston Market, and Olive Garden, where the food comes with a relaxed atmosphere. "These restaurants have to produce food at a price that is competitive to what it would cost people to buy at prepared food places or to make food at home," Zagat says.

BATH restaurants are usually neighborhood places and fairly simple, with a focus on offering good value. For people who have jobs and busy lives and don't have the time to cook, or for those that have closet-sized kitchens or who don't like cooking except on weekends, these places are more efficient than cooking dinner yourself.

BATH restaurants, also called Home Meal Replacement by the restaurant industry, are part of a national phenomenon of casual eateries designed to appeal to families in which both partners work. Convenience shoppers don't weigh whether to spend food dollars at a restaurant or at a supermarket. Rather, they are shopping for meals, and they will choose whichever retailer provides the best solutions to the problem of feeding the modern, average American family in a time-efficient manner.

The BATH or Home Meal Replacement restaurants are a phenomenon that feeds on itself. The better the alternatives become to home cooking, the more often those who would prefer not to cook will eat out, which in turn feeds the growth in numbers of similar restaurants, as well as their evolution.

"Generation Y is having a major impact on the food industry," says Ron Paul, president of Technomic Inc. "They are a major factor in one of the fastest-growing restaurant categories, 'quick-casual,' chains such as Panera Bread, P.F. Chang's and Baja Fresh, one step up from traditional fast-food places in quality, ambiance and price."

Dana Cowin, editor in chief of Food & Wine, says that twentysomethings have an overall understanding of just how good food can be. Many of them are devotees of the Food Network. However, they don't have time to cook that often. "Those of us who like to cook see it as a luxury we usually don't have time to indulge in,' says Alexander Robbins, 28-year-old author of Conquering Your Quarterlife Crisis: Advice From Twentysomethings Who Have Been There and Survived.

Young adults are demanding more exciting and complex flavors. They are interested in experimenting with a wide range of authentic ethnic and regional cuisines. They are not at all intimidated by ingredients such as tamarind or amaranth. The 2003 Gourmet Specialty Foods and Beverages report by Packaged Facts, a consumer-goods research and analysis group, says that young, food-savvy adults top the list of those who want to eat gourmet foods whenever they can. While adventuresome with food, they don't like a lot of spices - extreme flavors - and they have a low preference for foods presented as an art form. They are definitely a casual group and like their food presentation to be casual, as well.

Young diners like higher-quality and premium ingredients, things like artisan breads and upscale meats, such as 100% Angus beef and all-natural chicken. They like authentic ethnic foods. The fact that one in three young adults is now a member of an ethnic minority is sure to accelerate this trend.

Twentysomethings and young adults are looking for value, but will trade up for quality to affordable gourmet foods. Starbuck's is a prime example. "Fresh" tops the list of criteria young adults use when deciding what to eat, according to research by Buzzback Research, a market research organization. They are focused on high-quality ingredients, environmentally sensitive products, fair trade business practices and the healthy-nutrient qualities of food. They also index highest among all age groups for use and interest in organic foods, according to the Hartman Groups' Organic Food & Beverage Trends 2004 report.

As important as the food in young adults' dining experience is the socialization component. They are a very family-and-friends-focused generation and see restaurants as a place to socialize, make new friends, cruise the Internet and check e-mail, or simply hang out. Samplers and share-ables are playing an important role in this socialization, as they can be shared among family and friends and encourage conversation.

Being brought up in an age of media and the Internet, young adults seek out interactive, entertaining dining options, which include do-it-yourself menu options and interactive restaurants like Mongolian Grills and fondue restaurants.

Twentysomethings are having a major impact on the restaurant industry. There is little doubt that the adventuresome dining preferences and habits they are developing while they are young will continue with them throughout their lives and have a major influence on their children, as well. Watch out restaurant industry (and location-based entertainment facilities)! The flavor generation is on the march. They are well-educated and sophisticated diners who expect exciting flavor profiles, high quality and exciting dining experiences, all priced as a great value.