The importance of leisure in emerging and advanced economies

How the priority of family interacts with our working lives and need for leisure varies widely throughout the world. Family, work and leisure occupy a great deal for our daily time. Today there is an increasing overlap of all three spheres, especially in advanced economies where flexible working hours and greater gender equality have blurred the separation of work and personal life.

In advanced economies, the importance of family for parents has been basically steady since 1989-1993 (92% to 87% in 2012 saying it is very important to them), contrary to the popular press reporting that the family is in decline. Work has declined the most in importance, from 52% in 1989-1993 to 29% in 2012. Surprisingly, even with less importance placed on work, leisure has not increased in importance (40% to 38%). 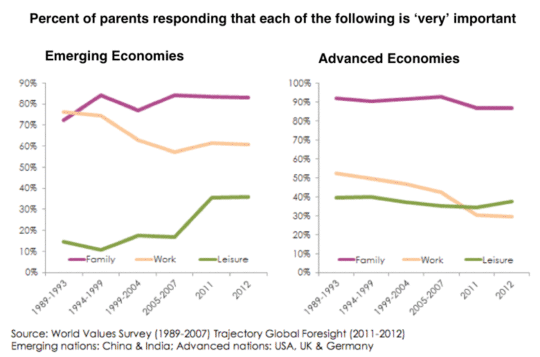