Everyone in the location-based entertainment (LBE) industry knows about the big IAAPA trade show held each November in Orlando, Florida. Unfortunately, few LBE developers and operators know about or attend the big National Restaurant Association Show held each year in Chicago. It’s unfortunate, as food has become such an essential part of creating compelling and repeatable entertainment venues. The NRA Show is where you can really learn about food.

I just returned from 4 days at the NRA Show. It’s really big and takes about 4 days to properly cover, allowing for time for your feet to rest. This year’s attendance was 58,000. The trade show had 1,900 exhibitors covering 515,000-square-feet. It is the world’s largest smorgasbord, as all the food and drink suppliers offer samples. The problem is that with all the sweet samples, it’s hard to keep a balanced diet as you munch your way down the aisles with all the dessert samples.

I didn’t attend in 2010, but did in 2009. Here’s my unscientific observation of nascent and new more mainstream trends based on the exhibitors I saw this year versus in 2009: 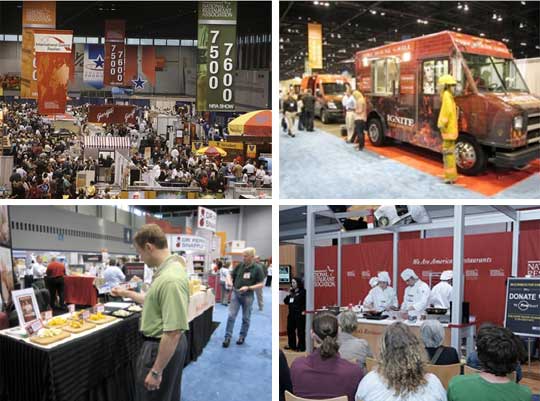