Who's ready to spend? Who will drive the long-term recovery for out-of-home entertainment and arts?

Now that Covid-19 infections, hospitalizations, and deaths are on the decline, and most governments have already or will soon lift masks, social distancing, and other operating constraints, we see a surge of people venturing out again to visit out-of-home entertainment and art venues and restaurants.

Most people are willing to spend more, at least initially, in discretionary categories, including out-of-home entertainment and restaurants. 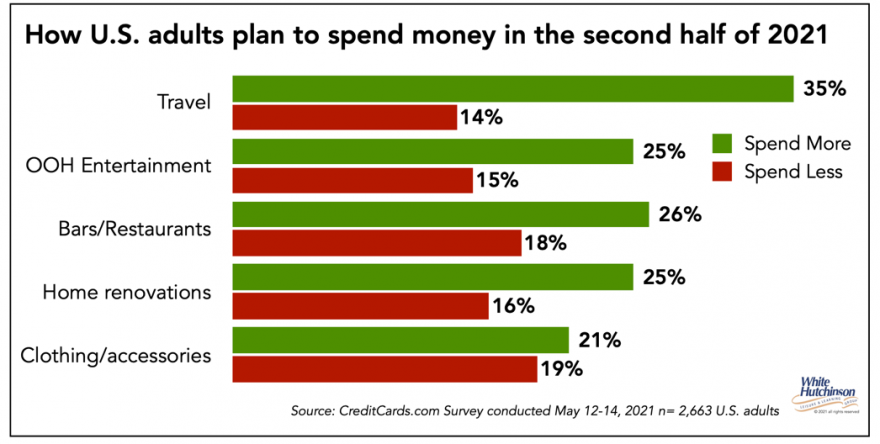 We are already seeing many restaurants and entertainment centers getting record-breaking crowds, more than they had during the same period in 2019.

The current surge shouldn't be mistaken as a long-term trend. It's the result of pent-up demand. Everyone who now feels safe in public places is rushing out all at once to catch up on everything they missed when stuck at home for so long. It's like if you were starving. Once you get access to food again, you tend to overindulge for a while.

The real question is, what does the future hold down the line when hopefully the pandemic is behind us with infections and deaths no worse than the flu and not impacting out-of-home behaviors for all but a small group of people? We'll then be back to "normal," although it will be a new normal. So which group of people, although not necessarily ready to spend right now, will ultimately drive the long-term recovery for out-of-home entertainment and arts (OOH E&A)?

Several factors need to be examined to arrive at the answer:

The pandemic severely constrained spending for OOH E&A fees and admissions. It was reduced to zero for a considerable time when all venues were closed in most parts of the U.S. After that, social distancing, capacity limitations, and the peoples' fear of Covid kept many people away. 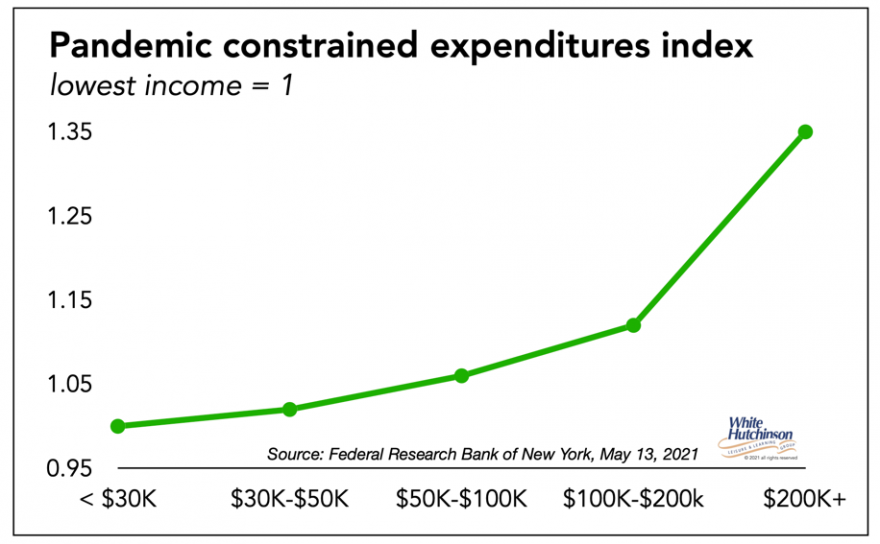 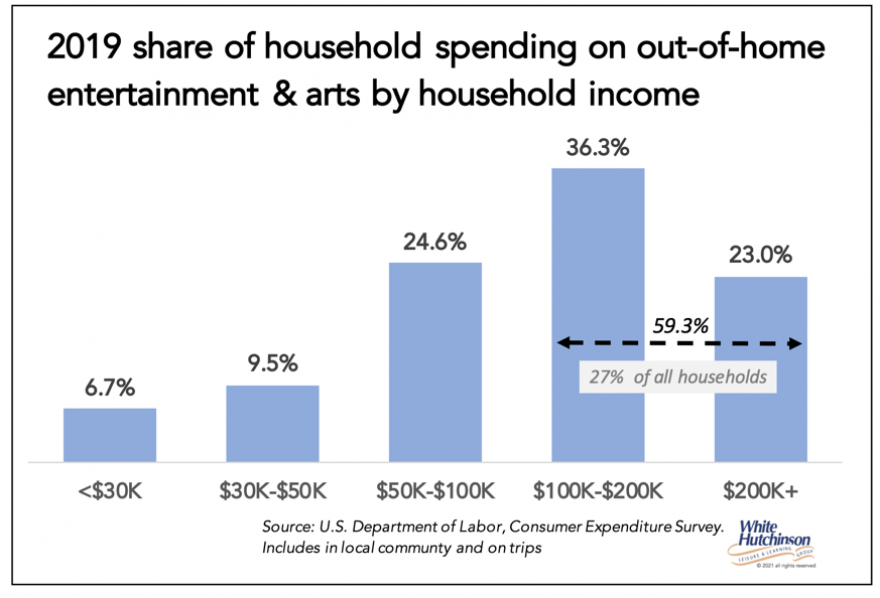 Spending by households headed by someone with a bachelor's or higher degree showed the same constrained spending on OOH E&A. In 2019, bachelor's+ households were 44% of all households and accounted for nearly three-quarters of all OOH E&A spending (72%) compared to 59% of all spending. 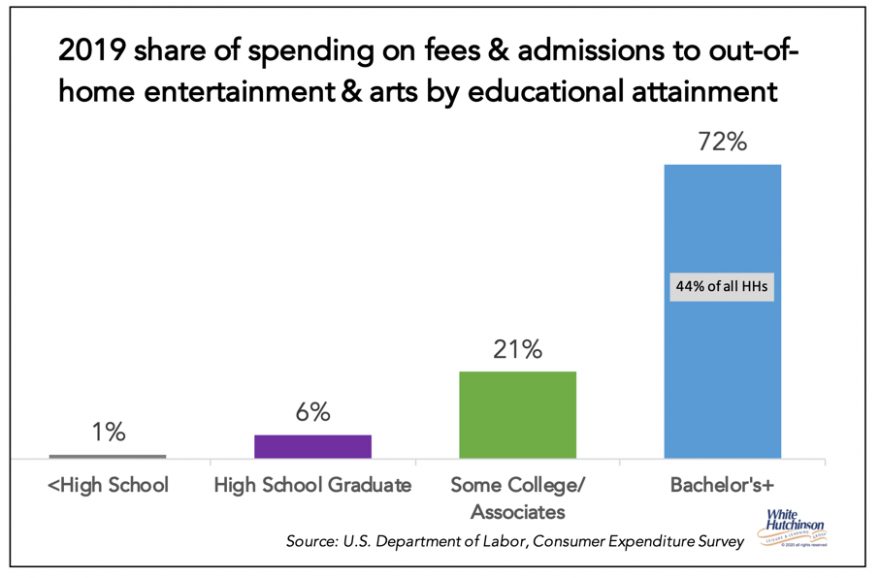 High-income households were not only likely to have cut OOH E&A spending the most but also experienced relatively less unemployment during the pandemic and fewer income losses.

As a result of more constrained spending, fewer job losses, and more investment in the stock market and housing, higher-income people increased their savings and overall wealth the most during the recession. Most are now comparatively better off than before the pandemic compared to most lower-income people, who are now worse off. 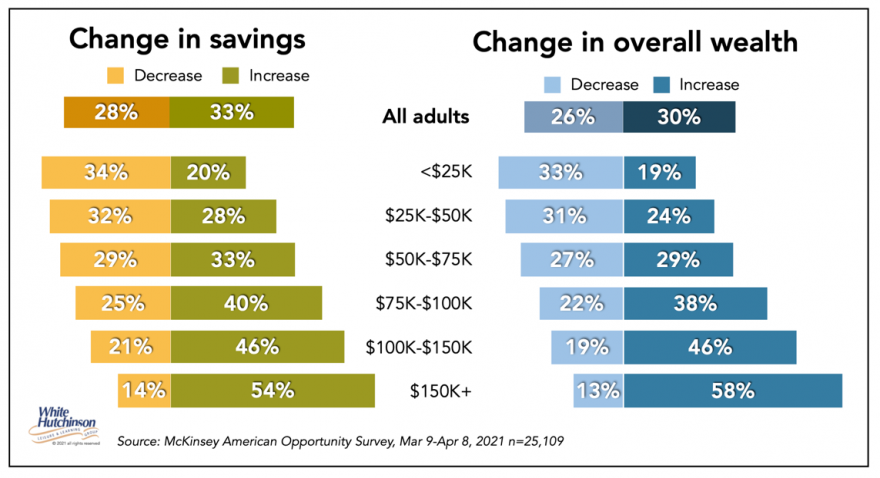 Lower-income and less-educated people are currently having the greatest difficulty paying their usual household expenses.

Less educated people are less likely to have enough savings to cover two months or less of their living expenses if faced with a job loss compared to the higher educated. 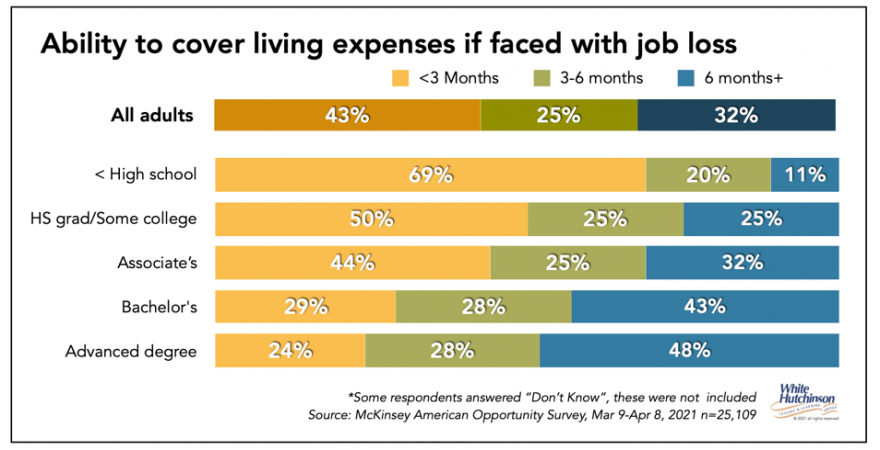 Nearly only three in ten adults earning under $50,000 have enough savings to cover one month's worth of basic expenses

Lower-income and less-educated people have been disproportionately negatively financially impacted by the pandemic. As a result, they are far less likely to return to spending for OOH E&A. It may be many years before most get back to normal. Even then, they are likely to prioritize increasing their savings for another rainy day rather than discretionary spending after getting financially burned during the pandemic. 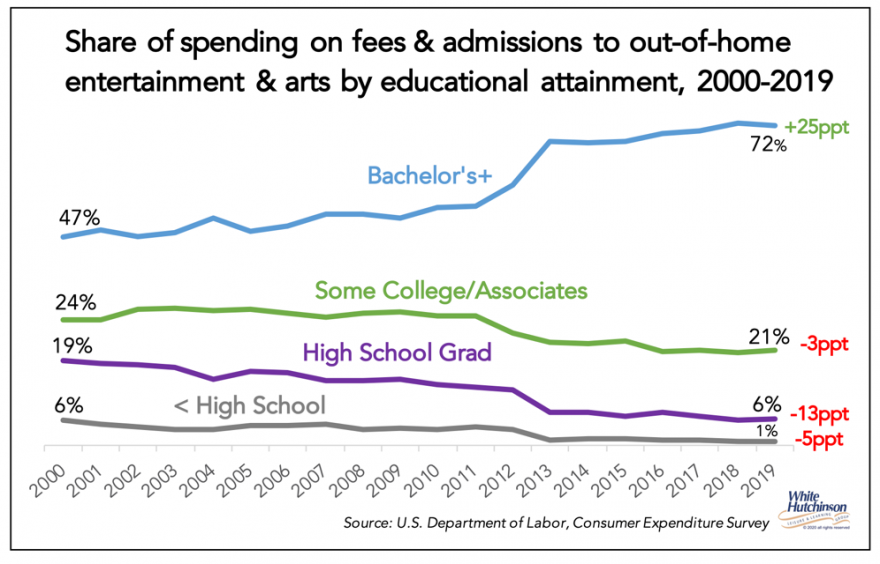 The economic impact of the pandemic will only accelerate this long-term trend. When attendance stabilizes in the new normal, we wouldn't be surprised to see higher socioeconomic households with a bachelor's+ education accounting for more than 80% of all spending at OOH E&A. We are also likely to see reduced overall spending at OOH E&A, as many of the lower and middle income will be financially squeezed out of the market.

What this means is that OOH E&A need to focus their experiences on meeting the needs, wants, values, and expectations of the higher socioeconomic to succeed in the post-pandemic world rather than on the middle class, who have traditionally been the target market in the past for many venues.