After living virtually for a year during Covid-19, younger generations now feel their presence on the Internet is more important than real-life interactions. A survey of over 2,000 U.S. adults found that more than six in ten Gen Zs and Millennials believe how they present themselves online is more important than how they present themselves in person.

And around four in ten Gen Zs and Millennials say they make a better impression online than in person. 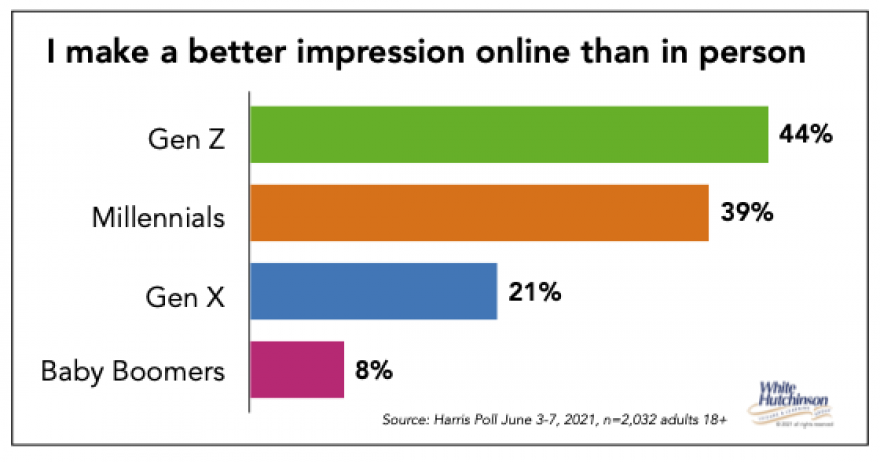 The survey found that virtual life is more memorable for half of adults. When it comes to remembering the color of a website versus someone's eye color, half say they remember the website's color better (49%). 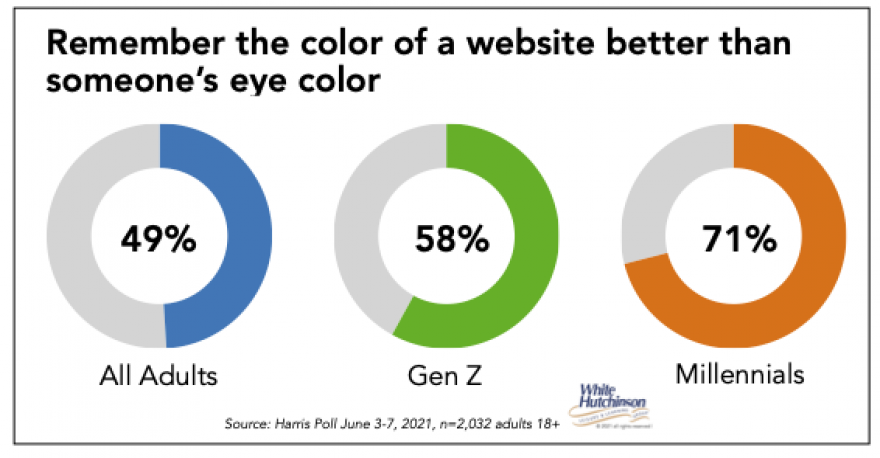 The vast majority of adults will look up people online before meeting them for the first time.

CivicScience found that as of the second quarter of 2021, nearly half of adults say they are addicted to digital devices. One-third of adults (33%) now say they never or almost never deliberately unplug from their digital devices for a least two hours. 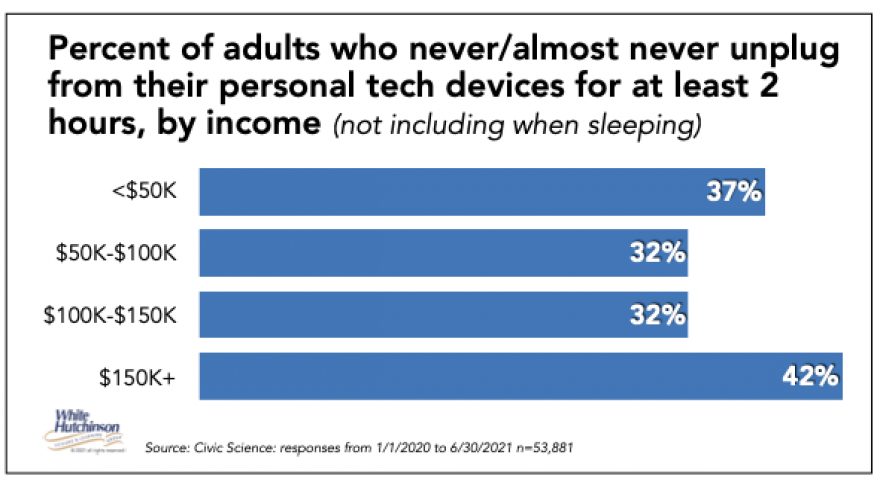 The combination of the smartphone and other mobile devices, the Internet, and social media has caused monumental transformations in how most people now connect and interact with other people and the world. As a result, many people have evolved to have a new 6th Sense, constant (digital) connectivity. The smartphone has become an always-on/always-on-you appendage for many people and is now the new 6th Sense used to constantly connect with people and experience both in the real and virtual worlds.

In a sense, people have internalized the technology of mobile connectivity. Going online isn't something they do. It's now something they are; now they see themselves as one with their devices. It's how they live their lives. It's changing how they experience and interact with the world. It has annihilated both the distance and time of experience.

Even before the pandemic, internet users in the U.S. spent an average of 6.5 hours online every day. More than half spent more than half of their waking time in the digital world.

Constant connectivity is affecting our behavior in many ways. We've previously written about the most recent trend of how the pandemic changed leisure and entertainment forever with the accelerated migration to the Fourth Place.

The pandemic forced Americans in a matter of just months to collectively entirely swap the physical for the digital world, creating the mass migration of entertainment and socialization from the real to the digital world. We were forced into digital engagement for socialization, shopping, restaurant food and drink, health, entertainment, and culture. Rapid advances in digital technology options facilitated this shift. This included not only increased digital engagement by digital natives, but also increased use by digital immigrants, people who had previously not been digitally engaged or were only minimally so. During the pandemic, digital engagement became the new normal for most people.

The forced rapid adoption of at-home digital engagement has led to the growth of the Fourth Place. Before the growth of the Internet, there were only three different places where people spend their time - 1st Place home, 2nd Place work, and 3rd Places. Third Places are the informal out-of-home places where people gather between home and work to socialize in the pleasures of good company and with lively conversation. They include bars, cafes, coffee shops, hair salons, community centers, clubs, many entertainment venues, and other hangouts of everyday social and leisure life.

We were stuck in one place during the pandemic lock-downs - home - without access to 3rd Places. 3rd Places are in the real world. So, we've tried to recreate many of those activities and their social experiences that used to sustain us with online digital technology. This included tours of museums, virtual concert attendance, Zoom wine tastings, dinners online, book clubs, game nights out, virtual watch parties of movies and video content, playing video games with friends, etc. These digital activities that attempt to recreate 3rd Place social leisure activities are an entirely new category of occasion and experience known as the Fourth Place. This digital space attempts to recreate real-world leisure and socialization. The pandemic has driven the adoption of the Fourth Place.

While digital virtual events initially served to transport IRL experiences into the living room, they evolved during the pandemic to serve as infrastructure for communication and networking. People were just not playing games or watching concerts; they were meeting and interacting with other people, thus becoming Fourth Places.

Fourth Places as alternatives to IRL 3rd Place experiences have many advantages. No need to get dressed - attend in your P.J.s. No need to spend time traveling to a location. No lines to the restroom at virtual concerts.

One of the most significant differences and attributes of Fourth Places is eliminating the need for a common physical locality. There is no difference if you socialize with someone across the street or on the other side of the world. Fourth Places allow people to expand their network of friends to people you would never have traveled to be with due to their distant geographic locations.

Many people will continue their pandemic-acquired Fourth Place routines because not only have they become habits, but they allow them to build community and meet new people. Many Fourth Places have already established communities and a sense of belonging. Over half of all adults (52%) have continued using Fourth Places, led by younger generations. This is no surprise, given the digital nature of the experiences and that some of the activities involved, like video gaming, or media streaming, tend to skew younger. According to the most recent data, 86% of Gen Z and 73% of millennials engage in Fourth Place activities.

Gen X - those aged 40-55 - stand out in the data with 57% participation in the Fourth Place. They are not digital natives, so unsurprisingly under-index in activities such as video gaming. But they have proven to be quite sticky in other activities, such as participation in an exercise class from home or attending virtual festivals, events, museums, etc.

The data also reveals significant splits by income. There is a substantial income dimension; generally, higher-income consumers are more likely to participate in Fourth Place activities.

There is already widespread use of very social Fourth Place co-viewing apps, with four in ten age 16-34 (41%) and nearly a quarter of age 35-54 using them.

And excitement about virtual and augmented reality that will further enhance Fourth Place experiences is high and highest among the higher socioeconomic. 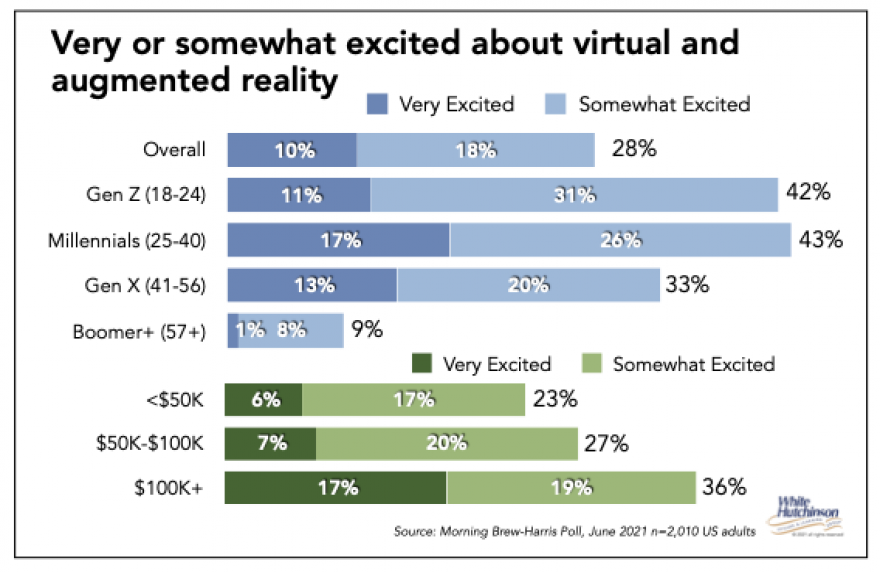 The Covid-19 pandemic has irreversibly altered our habits and our lifestyles. During the pandemic, we rebuilt our entire lifestyles around our homes and the digital Fourth Place. Now, with the option of spending time at home socializing in the Fourth Place, the appeal of staying at home has grown. The arrival of more and advanced Fourth Place options, especially more immersive ones incorporating virtual and augmented reality, will only make digital time in our homes even more appealing. Now, instead of asking, "Is there a reason to do this online?" people will be asking, "Is there a good reason to leave home and do this in person?" Even if just some of our increased constant connectivity and participation in Fourth Places sticks and continues after the pandemic is long gone, it will considerably impact reduced participation in out-of-home social leisure and entertainment. Location-based entertainment will be less relevant for leisure and maintaining social connection

It is also significant that higher socioeconomic people have the highest participation rate in Fourth Place activities. Pre-pandemic, they accounted for around three-quarters of time and spending at out-of-home entertainment venues. This market segment poses the most significant risk to out-of-home social leisure and entertainment losing market share to the Fourth Place.