The experience economy has arrived and it isn't what we thought

This is a reprint of our CEO, Randy White's article recently published in Medium.

Joe Pine and James Gilmore first described the emergence of the experience economy in their 1999 book of the same name. Now, seventeen years later, there can be little doubt that the experience economy not only exists, but also has become the new frontier for many consumer businesses. Just about every location-based consumer business is trying to transform itself from offering just goods or services to offering experiences in order to attract customers.

Back in the 1999 edition of their book, The Experience Economy, Pine and Gilmore described experiences taking place in the real world. A lot has changed since then with the rapid emergence and adoption of the Triple Digital Revolution - the web, mobile devices and social media. In the second edition of the book published in 2011, the authors wrote, “Finally, digital experiences increasingly flourish, using the World Wide Web and other electronic platforms to create new virtual and gaming experiences... bits-based experiences certainly offer capabilities unimaginable in the world of atoms.”

But even back in 2011, it was probably impossible to foresee how the digital revolution would evolve and rapidly grow over the next five years. Today, it is disrupting and transforming every facet of society, business and the way we work, play and live our lives.

Our company designs and produces leisure and entertainment venues, which have been a part of the experience economy even before it was recognized as such. As part of our work, we continually research trends of how consumers are spending their discretionary dollars. Our research has uncovered a trend in the retail industry that is probably more of a disruptive threat than even ecommerce. Very simply, there has been a significant shift of spending to digital experiences.

Analyzing household spending, we have found strong evidence of a shift away from spending on goods, or what we refer to as stuff. Over the 20-years since 1994, the percent of household annual expenditures spent on stuff (*) is down by almost one-quarter (-23%). In terms of inflation-adjusted dollars spent, average household spending on stuff has declined by one-fifth.

Examining the data further and focusing on stuff that would be used to facilitate real world experiences - spending on sports, recreation and exercise equipment - we surprisingly find this spending had declined by one-sixth (-17%), basically inline with the decreased spending on stuff. For households headed by 25- to 34-year-olds, the decrease was even greater at -29%. So it appears the experience economy is not translating into increased spending on goods that facilitate real world experiences.

The percent of all expenditures spent on real world experiences decreased slightly over the last 20 years by 5%, but for 25- to 34-year-old adults, it has actually increased by one-eighth (+12%). They have also significantly increased their dollar spending on real world experiences by more than one-quarter (+28%) while for the average household, it has been virtually unchanged (+1%). This confirms the popular belief that Millennials are the trendsetters in choosing experiences over stuff. 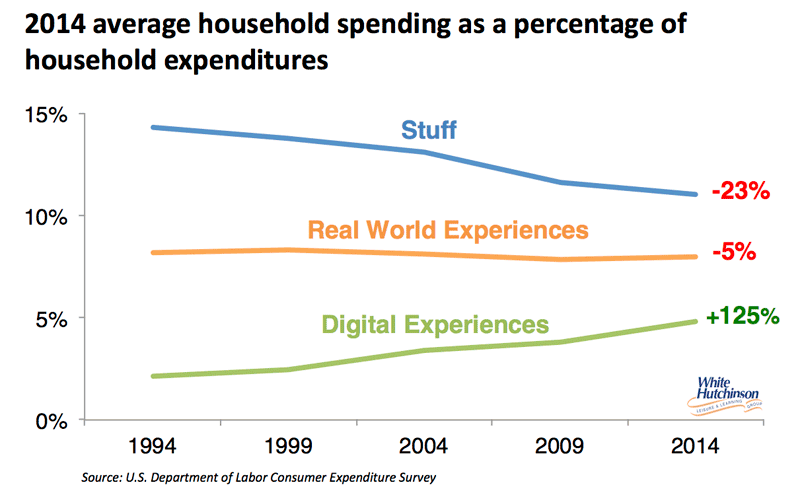