A year ago, Randy White, our CEO, reported in his blog post, Parents pan Chuck E. Cheese's food and experience, how Chuck E. Cheese's came in dead last in the 2014 Consumer Picks survey of consumer ratings of 111 limited-service restaurant chains. He also reported on CEC's attempt to improve their ratings with parents by introducing an “all new menu for grown-up tastes.”

Then in October, he wrote another post, Is Chuck E. Cheese's the Blockbuster Video of the Entertainment Industry? where he went into more detail about CEC's long term decline in same store sales due solely to their decline of food and beverage sales, explaining that CEC is no longer the dining destination it once was. He panned the new menu they had just introduced, challenging Greg Casale, the head chef at CEC, to get out of the kitchen and check out the food at the fast casual restaurants such as Panera Bread, Chipotle, Jason's Deli and all the new fast-casual pizza chains that moms and her kids are loving and eating at on a regular basis compared to CEC's new menu that Randy described as “... still so in the past. It's a 2005 menu in 2015.” Randy ended his post by telling Chef Greg, “You need to upgrade CEC's menu to one moms will love and they will want to feed their children. Get real!”

Well, it appears Chuck E. Cheese's and Chef Greg didn't follow Randy's advice. The latest Consumer Picks survey conducted in the last half of 2015 by Nation's Restaurant News and WD Partners just came out and CEC was again at the bottom of the barrel of all 173 rated restaurant brands. In fact, CEC's overall score in this latest survey was 32.4, a decline from last year's 35.9. Not only are they still the lowest ranked restaurant, they are going downhill, not improving.

This year's survey included 37,339 consumer responses on 173 brands, ranking 10 attributes of the dining out experience—atmosphere, cleanliness, craveability, food quality, likely to recommend, likely to return, menu variety, reputation, service and value. The scores for the 10 attributes were then combined to create an overall score for each chain.

CEC ranked last among all 173 restaurant brands not only in its overall score, but also on the following attributes: 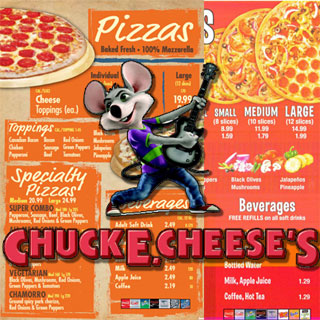 Even in a category where you would think CEC might rank high, atmosphere, it was beat out by Godfather's Pizza and Round Table Pizza in the pizza category.

Here's the history of CEC's Consumer Picks ratings over the past few years. As you can see, their ratings are on a downhill trajectory. 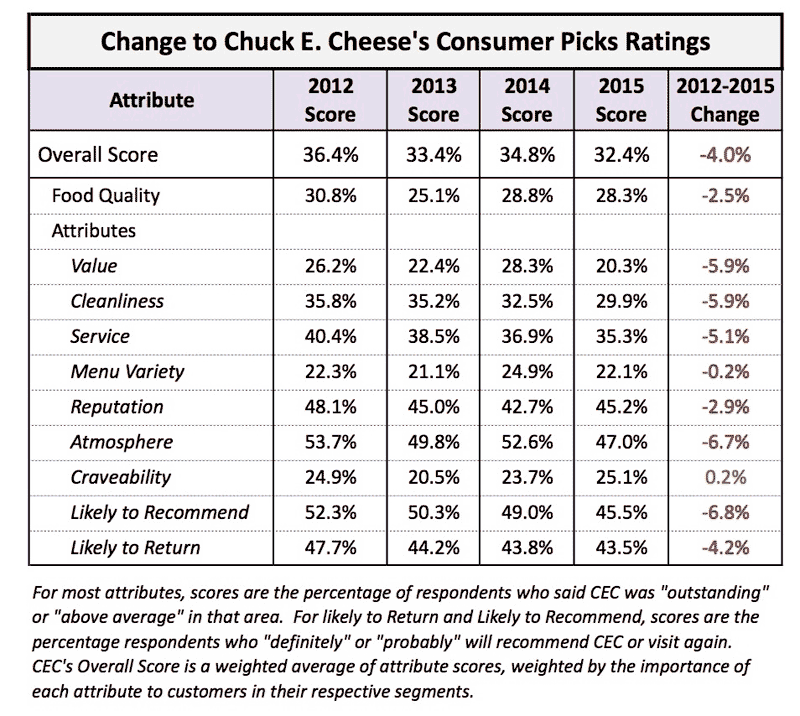 Why is CEC's overall score dropping? Most likely since consumers' expectations for the quality and selection of restaurant food is on the rise while CEC is basically staying static. The other issue is that CEC's failure to stay current with menu trends and consumer preferences over the last decade, especially mom's preferences for herself and her kids, has stigmatized CEC's food. And once you're stigmatized, you can't do a turnaround and change consumers' perceptions without a dramatic change. That is not something CEC has done with their new menu items. Panera and other fast casual restaurant chains have moved on to serving more healthful and ‘clean' (free-from) food while CEC thinks a mac ‘n' cheese pizza is the answer.

This just goes to show how important food and beverage that fits consumers' contemporary expectations and preferences is to the success of leisure venues. Even well established brands such as Chuck E. Cheese's can fall out of favor in today's contemporary restaurant and foodie-obsessed competitive landscape.