Is Chuck E. Cheese's declining comparable store sales the result of digital Darwinism, KGOY or what? 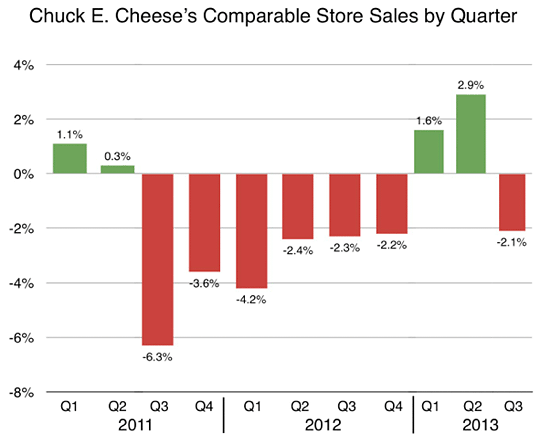 In the company’s 3rd quarter 2013 Earnings Call, management attributed the declining sales to:

As we reported in our June 2013 issue, Chuck E. Cheese’s comparable store sales have been on a long term downward trend, having decreased twenty-four percent (-24%) in inflation-adjusted dollars since 2003. 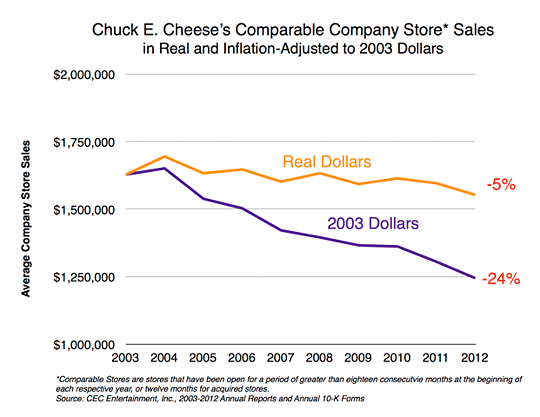 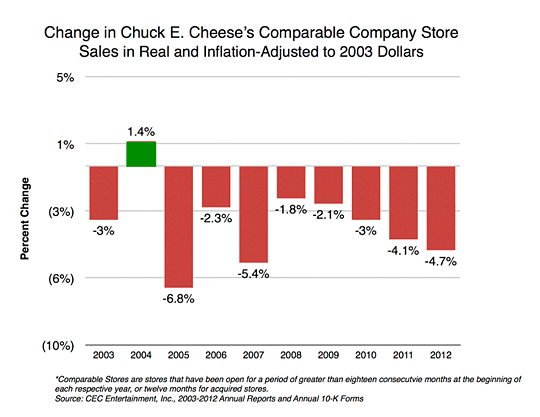 So, what are the causes of Chuck E. Cheese’s continued downward slide in comparable store sales. Is it internal? Or are there external factors that are affecting store performance?

Children’s Movies
First we will examine children’s movies, as CEC’s management cited them as a contributing cause to the 3rd quarters poor performance in their earnings call: “During the third quarter, revenue from kids’ movies rated G and PG increased by approximately 65 percent, or $320 million, compared to the same period in the prior year,” CEC Chief Executive Officer Michael Magusiak said during the earnings call. “This increase in kids’ movies is significant.” In the past CEC’s management has pointed to kid movie competition a number of times as a cause of its declining comparable store sales.

We examined ticket sales for G and PG movies starting in 2003. The following graph looks at ticket sales on a per capita basis, as that adjusts their number of ticket sales to an increasing population. 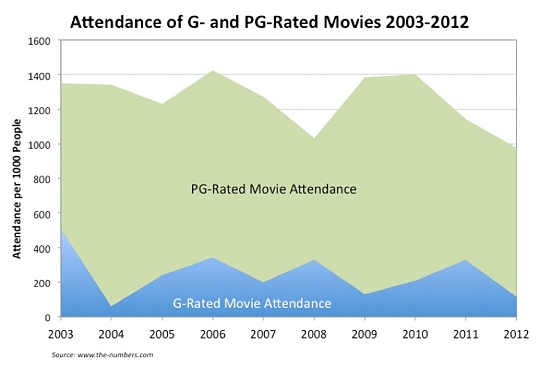 We then created an index chart for both per capita G- and GP-movie ticket sales and for inflation-adjusted comparable store sales, with an index of 100 being the number/amount of each in 2003. As the graph shows, per capita attendance at G and PG movies has not increased over the 10 years. Rather, the kid movie attendance more closely tracks the decline in CEC comparable store sales. So there is definitely no correlation to CEC’s store sales and is not a contributing factor to declining store performance. 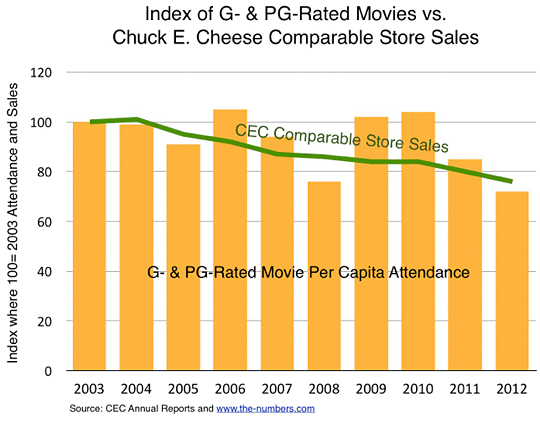 Overall Political & Economic Uncertainties
You can only point to the economy and consumer confidence so long as a cause of decreasing sales. If these were truly factors, then how to you explain the decline in comparable store sales that started in 2004 before the Great Recession? In fact, when we look at average household expenditures for community-based entertainment for households with children younger than age six as well as for households with older children, there is an upward trend starting in 2003-2004. 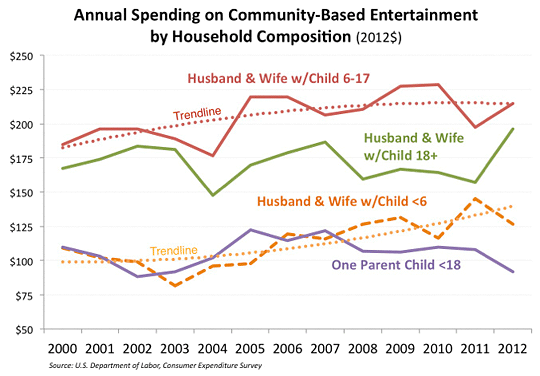 Although children’s movies and economic conditions do not appear to be the root causes of CEC’s downward store sales, our research indicates there are definitely some other external factors:

KGOY
Kids Growing Old Younger or KGOY is marketer-speak for what is also known as children’s age compression. It can be understood as consumer culture through the media pushing adult products and teen attitudes on younger and younger kids. Here are a few examples:

Age compression, children becoming more sophisticated for their age in what appeals to them, has shrunk the age range of children that Chuck E. Cheese’s appeals to. Years ago children as old as age 10 might have enjoyed going there. Today, it is considered sissy to a 10-year-old. Chuckie’s appeal now drops off at around age 8.

CEC is making an attempt to counter this trend by updating their well know rodent mascot into a hip, electric guitar-playing rock star with an edgier look and bit more mischievous attitude... and no baseball cap. However, the hipster mascot will not overcome the sissy factor for 9 and older children when they are mixed in with much younger children.

Digital Darwinism
Just as adults are increasingly turning to mobile devices like smartphones and tablets, their children, even the youngest ones, are becoming digitally wired as well. As a result, children have many more interactive entertainment options than they did in the past, including video games on mobile devices. 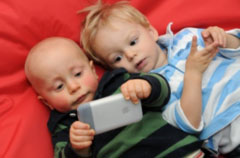 Their access to digital entertainment is rapidly expanding. Between 2011 and 2013, the number of 0- to 8-year-olds with access to mobile media increased from 52% to 75%. The average time that 0-to 8-year-olds spend using mobile devices has tripled since 2011 and the amount of their total time on the devices playing video games have increased from 33% to 63%. During a typical day, children 8 or younger who have access to a mobile device spend an hour and seven minutes on them, up from 43 minutes in 2011. Children age 5 to 8 now spend an average of 49 minutes a day playing video games. Interestingly, children have shifted there digital entertainment time from passive television to interactive screen time, and interactive entertainment games is the entertainment arena in which Chuck E. Cheese’s competes.

CEC has started moving into the digital age to increase its appeal to tech-savvy children by combining digital and real world experiences, what is called convergence or fusing. They have extended the Chuck E. Cheese’s experience 24/7 with on-line games where children can win redemption tickets and they just released a free augmented reality app for iPhone and Android that works in their stores.

Location-Based Entertainment Competition
There was a time around 25 years ago when Chuck E. Cheese’s owned the out-of-home children’s entertainment market, including the commercial birthday party market. That has changed dramatically, especially in the last decade or so. There has been a rapid expansion of inflatable or bounce houses, trampoline centers, play cafes and other community-based venues targeting young children as well as family entertainment centers that also attract younger children. This competition has taken a large slice of the out-of-home children’s entertainment pie.

Highest Common Ground
Family decision-making has changed significantly over the past decade or so. It used to be that the decision of where to visit was driven by either the child, often by nagging, or by the parent. Now decisions are made within the family in a collaborative fashion where the choice has to meet the approval of all parties, but not necessary be the top choice for either. This is known as finding the choice that has the highest common ground for all parties.

Over the past decade, CEC comparable store sales have seen the most dramatic decrease in their food and beverage sales, a 46% decline per average store from 2003 to 2012. For years, Chuck E. Cheese’s foods, especially the pizza, was kid-focused and not popular with parents. We believe this has been a negative influence (as well as other aspects of a Chuck E. Cheese’s experience) causing parents to shy away from taking their children to CEC. Meanwhile the quality of restaurant food and consumer expectations has been on the rise. Recently CEC upgraded their pizza quality to have more adult appeal. However, we believe that their food has become so stigmatized with adults that it will take a long time to change the image of the food with parents.

Enriching Play
Today most parents are not only interested in visiting leisure facilities with their children that are fun and entertaining, but also destinations that place a high value on exposing their children to enriching learning experiences. There has been a cultural change along with a generational shift on how mothers of young children look at their children's play. Unlike Boomer moms, who saw their children's play and learning as separate activities, Gen-Y and Gen-X moms want their children to play and learn at the same time. As a result, we believe there is a shift of leisure destinations visits away from pure entertainment venues such as CEC to more enriching experiences at children’s museums, aquariums and similar venues.

What has made this trend even stronger is that the percentage of mothers (and dads) with a Bachelor Degree or higher has increased significantly from 24% in 1995 to 38% in 2012. Those moms are the ones who most value their children learning while the play and visiting enrichment leisure venues with their children. 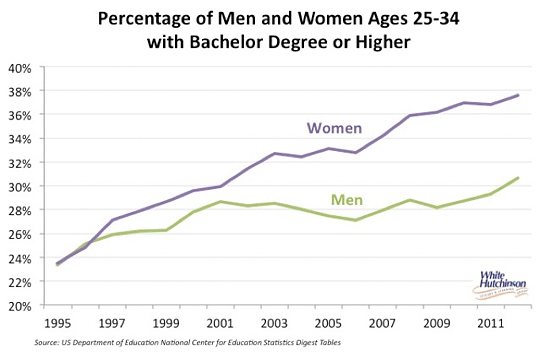 Chuck E. Cheese’s offers pure entertainment rather than enriching children’s experiences, so now ranks lower in priority with these parents as a leisure destination to take their children to.

What this says is that that CEC has become victim to a changing and a more competitive children’s entertainment landscape, a changing children’s childhood and a changing family culture. These factors are also affecting other children’s leisure venues, some negatively and the ones that have evolved with the changes, positively.

We will continue to periodically report on Chuck E. Cheese’s progress to turn their comparative store performance to an upward trend.