In our March 2004 issue, we reported about the new Wannado City children's edutainment project that has since opened at Sawgrass Mills in Ft. Lauderdale, Florida. The center is touted as "America's first indoor role-playing theme park" We have learned some more information about the project.

Wannado City is 140,000 square feet and includes 60 different venues where children ages 4-11 can role-play 250 different careers such as a firefighter, home-improving and broadcasting. The project cost $40 million to develop. 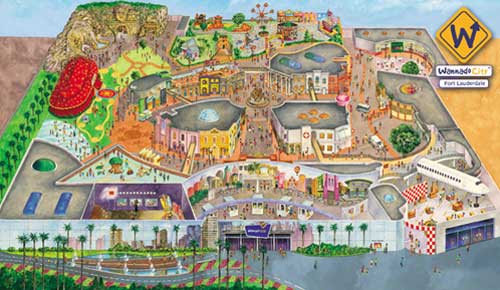 Wannado Entertainment, owners and developers of the park, had originally hoped to defray a large portion of the development cost with sponsorships. Unfortunately, unlike La Ciudad de los Niños (Kids City) in Mexico City that was able to get a lot of sponsorship underwriting, so far Wannado City has only found 11 sponsors who are paying $4 million to get their brands in front of the 1 million projected annual visitors. Sponsors include Spirit Airlines, with a DC-9 where kids use flight simulators, the Miami Herald, which has kids pose as reporters for the newspaper and a Publix supermarket. Soon to open will be a Coca-Cola plant where kids control the carbonation level of drinks on the bottling line.

Wannado City is hoping to generate $30 million in revenue from ticket, product and sponsorship sales by next August. Achieving that will depend on their success at signing up more sponsors. Admission to the park is $25 for children and $16 for adults.