NielsenIQ has identified five U.S. consumer groups based on the pandemic's economic impact on their financial security and associated spending patterns they anticipate in 2022 based on their survey in December 2021 and January 2022. The consumers within the five groups have been shaped by their unique circumstances and their likely approach to endemic living.

Nearly three-quarters (74%), those identified as Strugglers, Rebounders, and Cautious, are cost-conscious consumers who are altering their consumption patterns. These segments will be re-evaluating essential vs. discretionary purchases, including for out-of-home leisure & entertainment.

The NielsenIQ study was conducted before high inflation reared its ugly head. As a result, these three segments will become even more cautious with discretional spending. March research by IPSOS found that 86% of people expect inflation to change their spending habits. 42% of consumers are now worried about paying their bills each month. 35% now say they will likely sacrifice other spending so they have enough to cover costs of essentials like groceries, utilities, and gas. Only 14% say they don't expect their purchasing habits to change in some way to spend less.

A new survey by Momentive published April 8th by CNBC finds rising concerns about inflation and the risk of a recession, with Americans saying not only have they started buying less but will be buying less across more categories if inflation persists. This is not limited to lower-income consumers. Even consumers with incomes of at least $100,000 are showing signs of financial stress and have begun cutting back on dining out, travel and vacations, and cars. 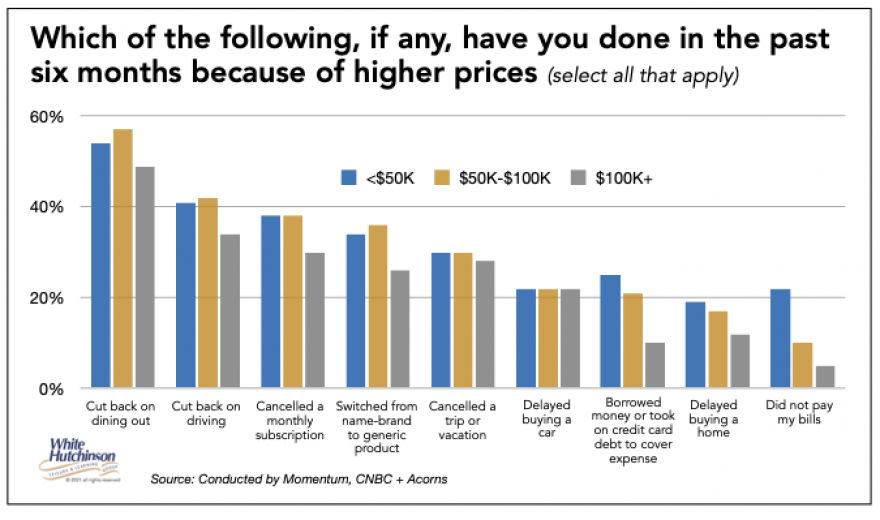 More than half of people with household incomes under $50,000 say they have already cut back on multiple expenses due to prices. For those with incomes of at least $100,000, the cutback levels are already similar for dining out, taking vacations, and buying a car.

"People making six-figure incomes are almost as worried about inflation as people making half as much -and they are just as likely to be taking steps to mitigate its effect on their lives," said Laura Wronski, senior manager of research science at Momentive. "Inflation is a problem that compounds over time, and even high-income individuals won't be insulated from the second- and third-order effects of price increases," she said.

Even with people's strong urge to get back to the out-of-home leisure and entertainment activities they did pre-pandemic, we're likely to see restrained visits and spending by a significant portion of the population for some time into the future as long as high inflation persists.