It's called the Food Network effect. Our office tried to count all the food and cooking shows how on television and the Internet. We found 800 shows in America and stopped counting. We didn't attempt to get a count of all the food blogs, of which there are hundreds. In the U.K., the BBC TV channels alone show 443 hours of cooking and food shows a week. All these shows and blogs have changed the way we look at food and are responsible for a culinary revolution. As a result, restaurants have transmuted to be a form of entertainment. Now dinner is the show. And food is now lingua franca, a new common language that connects us all.

America and the U.K., as well as many other countries, are now foodie nations filled with consumers' growing sophistication and obsession about food and drinks. Consumers' expectations for food experiences have dramatically increased. The majority of consumers are now seeking culinary adventure from restaurants. Today, with all the foodporn on social media, more consumers are also “eating with their eyes.” For many today, if it isn't Instagramable to share with friends, it's not worth eating.

What was once just fuel for everyone has become a vehicle for foodies' self-expression, their sense of personal identity, a point of pride, a means to gain social currency, a political statement, an expression of their creativity and much more .

Eve Turow, a food, travel and culture writer, says the reason why we as a culture are so obsessed with food “is that in the digital-first era, many people latch onto food as something that engages all the senses and brings them together in a real world physical space.” She sees technology causing sensory deprivation, so “people want what's tangible, that they can see and feel and smell and taste...”

Think about it. Food facilitates socialization. We evolved a humans gathered around the campfire sharing food and beverage. The number one reason couples, groups of adults and families go out to leisure venues, including restaurants and entertainment centers, is to socialize. 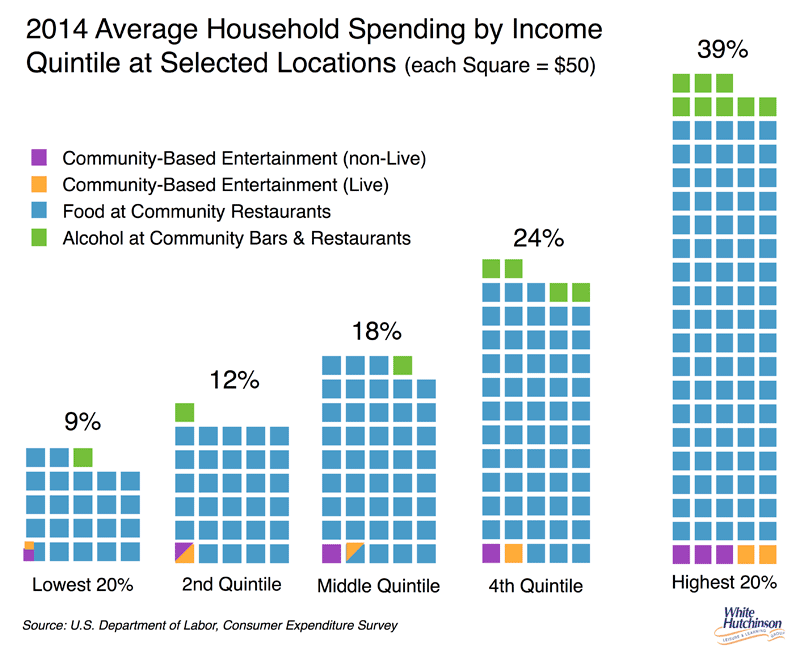 In the above graph, just look at how much each quintile of household income spends on food and beverage at local community restaurants and bars (the blue and green squares) compared to community-based entertainment spending (the purple and orange squares). And as you can see, the highest income households, who are responsible for the majority of out-of-home entertainment spending, are also the big spenders at restaurants and bars. You only need to get a small slice of the food & beverage spending versus a large slice of the entertainment spending to be successful. Many of what our company calls the New School Social Eat-Drink-Play venues that have tapped into food revolution have food and beverage sales exceeding their entertainment revenues (see our latest white paper for more about the New School venues)

The Food Network Effect has changed the out-of-home leisure venue landscape. Now is the time for entertainment centers to move from a 20th Century model to a New School model by tapping into the new foodie revolution.