This is not good news for location-based leisure venues (LBLs), including family entertainment centers (FECs). The middle class and the upper-middle class, which in past years has been a significant part of LBLs customer base, are shrinking.

There are two basic ways to measure the middle class, statistically by incomes or by self-perception. Results from the latest Gallup poll in April plus earlier polls clearly shows fewer and fewer Americans consider themselves in the middle and upper-middle class. From 2000 through 2008, an average of more than 60% of Americans considered themselves members of the middle-/upper-middle-class. That has declined to 51% this year whereas those who consider themselves part of the working and lower class have increased from 33% to 48%. 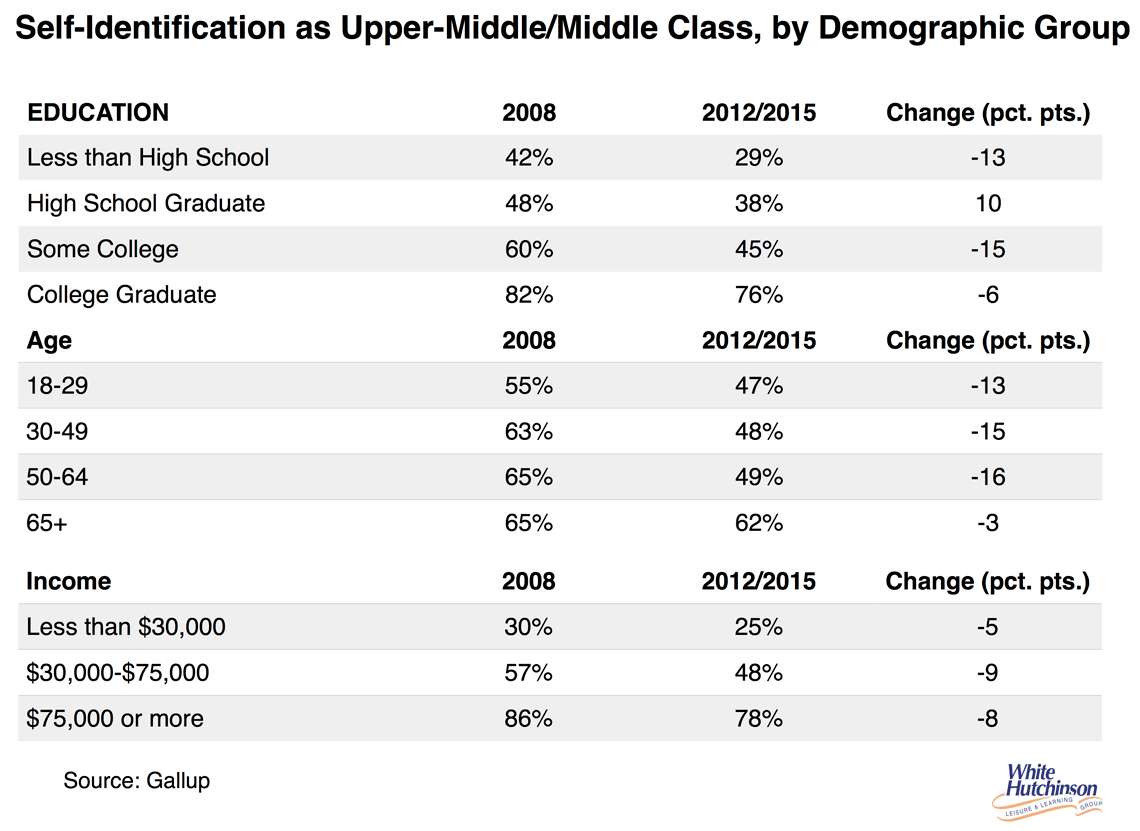 The percentage of Americans identifying as middle or upper-middle class was almost the same in 2012 as it is in 2015, even though the economy, at least as perceived by the public, is in much better shape now than it was in 2012. This suggests that Americans have shifted into a "new normal" way of looking at their class standing, with the Great Recession having convinced a number of Americans that they are not now, nor are they going to be, middle class -- but rather are firmly ensconced in either the working or lower class. 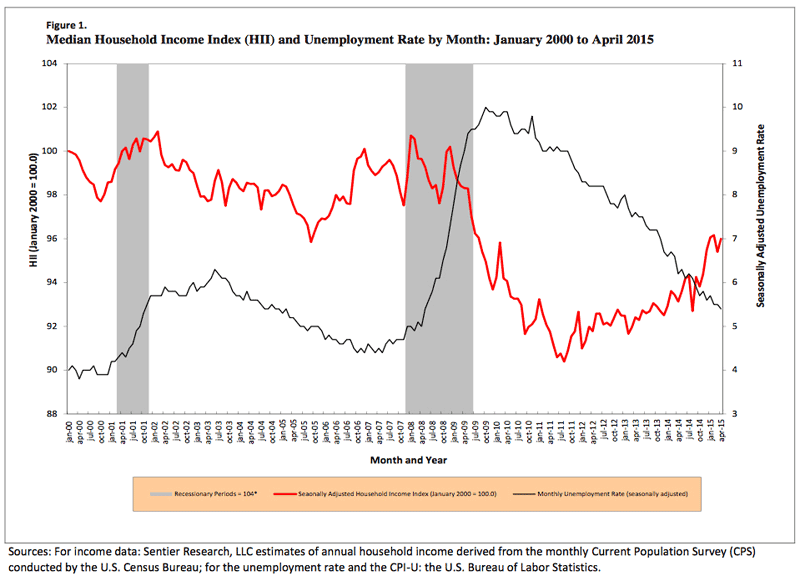 We dug into the data a little more and looked at men's earnings between 2000 and 2013 based on education level. It dropped across the board, consistent with Gallup's findings on self-perception of income by education level. 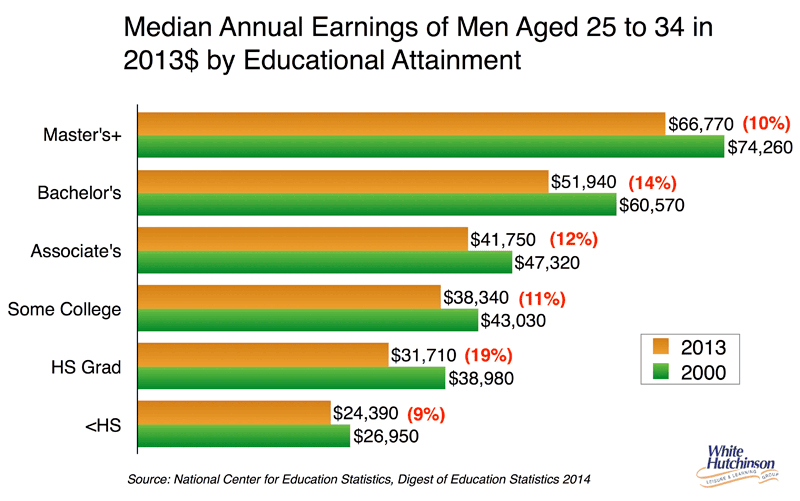 Wealth also has an impact of people's perception of their economic class. That is not a pretty picture. 10% of the population now control over three-quarters (77%) of U.S. wealth and 20% of the population holds 89% of the nation's wealth. Net worth plays a large role in how people feel about their economic security and affects what they spend on. When your net worth is low, you tend to not spend on discretionary items such as out-of-home entertainment. 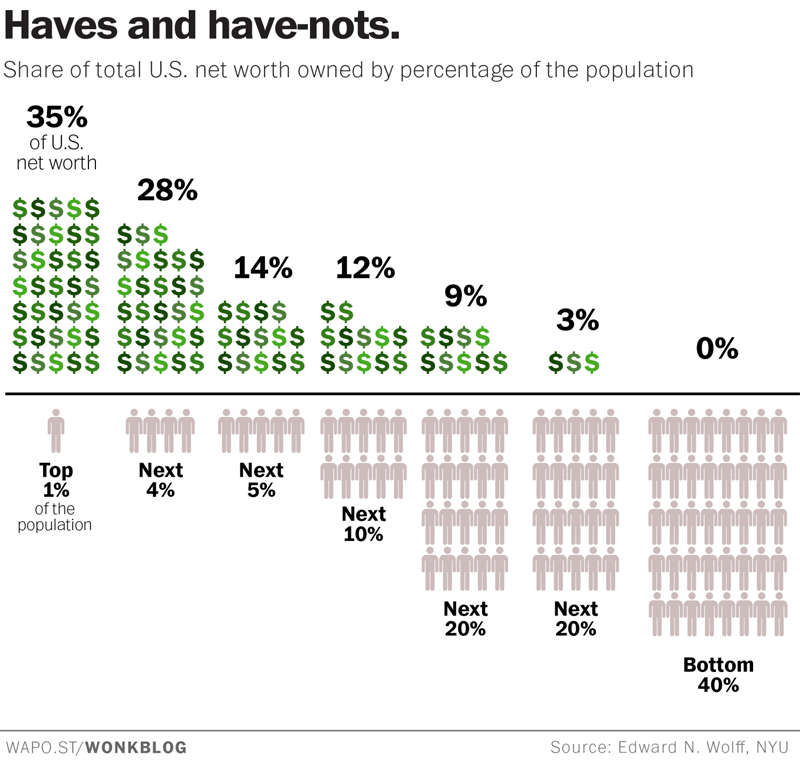 There is definitely wide wealth inequity in America. 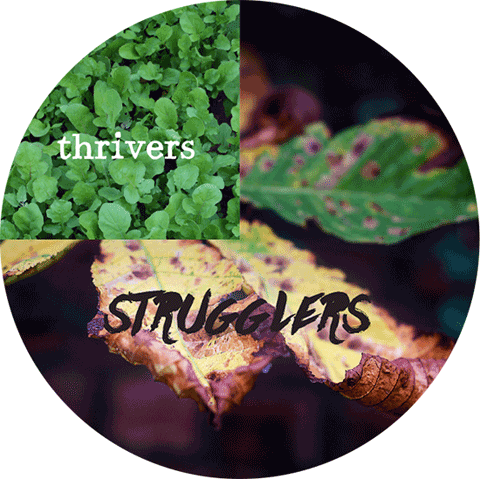 The Federal Research Bank of St. Louis released a study earlier this year titled The Demographics of Wealth. In it they identified Thrivers, families thriving financially headed by someone who is typically middle-aged or older, white or Asian, and with a college degree alone or with a graduate or professional degree. Thrivers generally earn above-average incomes, make conservative financial choices and have accumulated substantial wealth. Thrivers constituted 24% of all U.S. families in 2013 and they owned 67% of the economy's wealth

The remaining 76% of families who are struggling financially, the Strugglers, are typically younger, less educated and black or Hispanic. They earn average or below-average incomes, make less-conservative financial choices, and have accumulated little or no wealth; they own 33% of the nation's total wealth. Many, although not all of these families are financially unstable.

So what does all this mean for LBEs and FECs. It's very simple. A large part of yesterday's target market, the middle class, has shrunk and will probably not return. To succeed today and into the future, you need to target the higher socio-economic families, the Thrivers, who are financially secure and have the discretionary incomes and inclination to spend on out-of-home entertainment, dining and drinking.