About one month ago our CEO, Randy White, posted one of his blogs with a preview of our analysis of 2012 consumer spending data. His blog announced both the good and bad news – the good news was that household spending for community-based entertainment venues was up, but spending for entertainment on trips was continuing its downhill staycation slide. He promised a more in-depth analysis in this issue of our eNewsletter, so here it is.

Average household (HH) CBE spending increased by 5% from 2011 to 2012. Average spending is now identical to the rate of spending in 2000, but still 4% lower than its pre-Great Recession level in 2007. When we look at average HH CBE spending for the different quintiles of HH income, we see the continuation of a long-term trend. The highest two HH income quintiles increased their spending and the lowest 60% of income HHs decreased their spending in 2012. Whereas in 2000, the top 40% of income HHs accounted for 64% of all CBE spending, in 2012 their share increased to 70%, with all the growth attributable to the top 20% income group whose share grew from 42% in 2000 to almost one-half (47%) of all such spending in 2012.

The preceding analysis is based on the average spending by all households. However all HHs don’t attend entertainment venues. So we dug down into the data to examine changes in both the participation rates (average quarterly participating rates each year) and how much those participating (attending) HHs are spending. 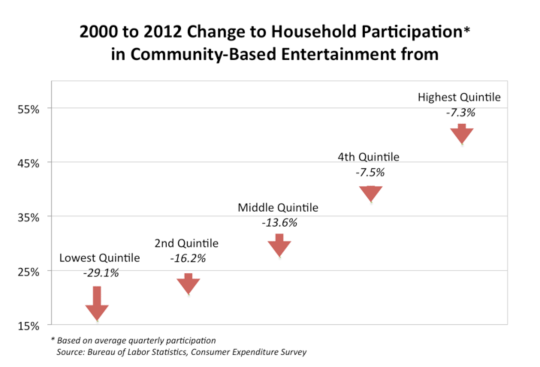 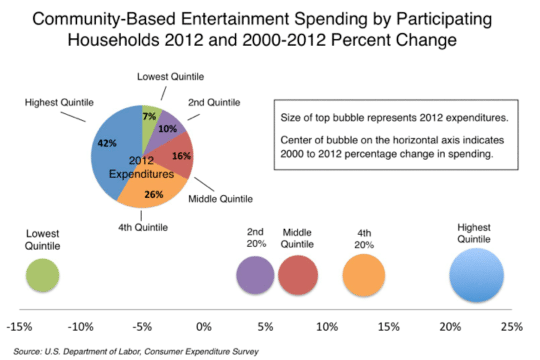 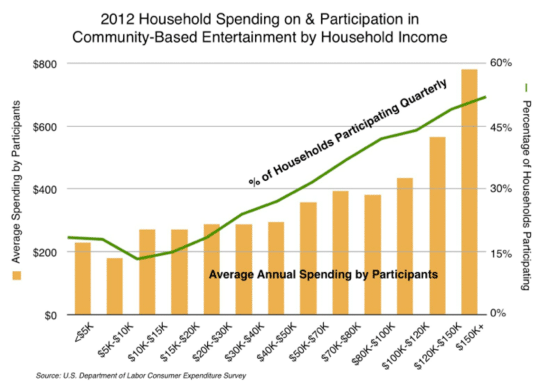 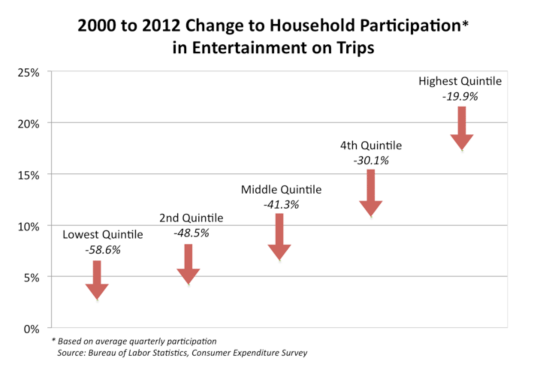 The percentage of HHs participating in trip entertainment has dropped by one-third (34%) since 2000. Every income quintile of HHs has decreased their participation rate in entertainment on trips, while those that do participate have increased their spending with the exception of the middle quintile. Spending by participating HHs in the lowest quintile of income is much closer to the spending rate by the highest quintile households than for CBE spending; it’s three-quarters (77%) of the amount. 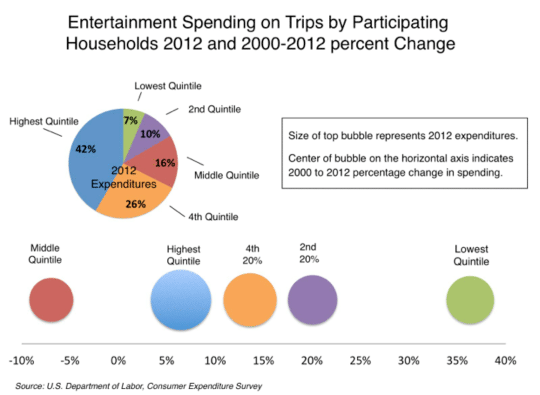 Consistent with other out-of-home leisure venues
The long-term trends we are seeing with spending and participation at entertainment venues is consistent with what is happening at other types of leisure venues. Since 2000, average household spending is down at local sporting events and down even more for admissions to sporting events during trips, again with declines being inverse to household incomes. Likewise participation is down more during trips than in the local community and spending is up for those HHs that do attend. Our research has found a similar decline in attendance at National Parks and cinemas. 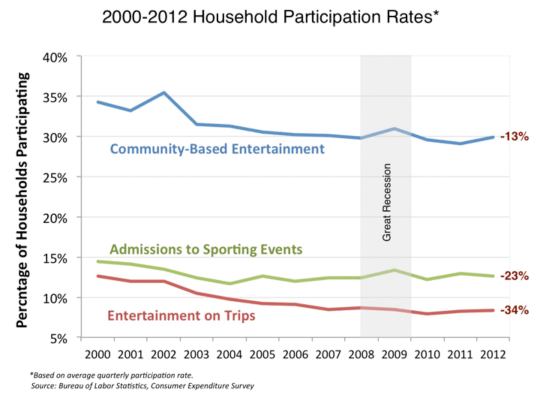 Summary
This is a lot of information to digest. Here’s what we believe it means. There are several long-term trends in play that show no indication of abating:

Conclusion
Although CBE spending by the average household is holding steady over the long term with some ups and downs, the higher income households are becoming a larger and larger share of all such spending. CBE participation is in a long-term decline with a larger share of participation shifting to higher income households. The market for location-based entertainment is continuing to decrease for entertainment on trips and a larger share of that shrinking market is shifting to higher socioeconomic households. The long-term trends indicate that today and even more so in the future, the lion’s share of location-based entertainment spending will come from higher socioeconomic households attending venues that offer premium, High Fidelity experiences.