It's time to reinvent the game of bowling

Today a little over 97% of all bowling centers in the U.S. are ten-pin houses, and there is a good reason for that. In the late 1800s there were many bowling clubs in the Northeastern United States that used different variations of tenpin bowling since there were no standards for ball weights and pin dimensions. So in 1895 the American Bowling Congress was formed to standardize the sport so national competitions could be held. Ten-pin became the standard for sport and competitive bowling. Then in the 1950’s television embraced competitive bowling with shows such as Championship Bowling, Make the Spare, Celebrity Bowling and Bowling for Dollars. Soon after television started broadcasting major competitions such as the Pro Bowlers Tour and Ladies Pro Bowlers Tour. The popularity of ten-pin bowling as a sport grew with competitive league bowling becoming the dominant revenue generator for bowling alleys, often 75% or more of their revenues. So new centers were developed as ten-pin centers since leagues and tournaments were driving the industry. Bowling was primarily considered a competitive sport. 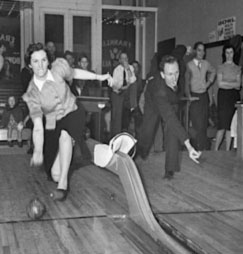 Back before the boom of league bowling in the later 1890s, ten-pin bowling was not as dominant as it is today. There are two other forms of bowling in America – duckpin and candlepin. Duckpin bowling uses a ball about the size of a grapefruit (4-3/4 to 5 inches in diameter) that weighs between 3 lb.6 oz. to 3 lb.12 oz. and lacks the finger holes found on ten-pin balls. That compares to a ten-pin bowling ball that weighs up to 16 pounds and is 8.6 inches in diameter, with the lightest being a 6 pound ball that is generally used by children. Duckpins, while arranged in a triangular pattern of 10 pins identical to ten-pin bowling, are shorter, smaller, and lighter than their ten-pin equivalents, about 2/3s their size. Since duckpins don’t score as high as tenpins, there are three throws for each frame versus the two in ten-pin 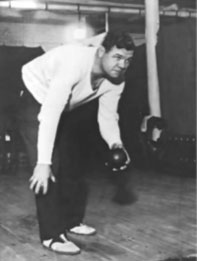 Duckpin bowling has a contested history. One version claims that duckpin bowling began in Baltimore during the summer of 1900 at a bowling, billiards and pool hall owned by future baseball Hall of Famers John McGraw and Wilbert Robinson, both of them then Baltimore Orioles. Another version traces duckpin’s origin to Lowell, Massachusetts in 1893. It was named duckpin bowling as an article in the Baltimore Morning Sun newspaper described how the pins flew when the ball plowed into them as looking like a “flock of flying ducks.” 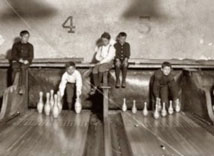 Early pinboys. Those are duckpins on the right

The Sherman duckpin setter only had one motor

Automatic duckpin setters were developed in 1953 by a kooky inventor named Kenneth Sherman and named the Sherman Pinsetter (video of duckpin bowling and Sherman duckpin setter). Before then duckpins were set by hand by human pinsetters. Many pinsetters were teenaged boys, and thus pinboy was another name used to describe the job. The pit behind the pin deck was deeper than it is now, and under the pin deck was a pedal that raised a steel pin at each pin position on the deck. To set the pins, the pin boy picked up the duckpins and placed the hole in the bottom of the pin over the steel pin protruding from the deck. He took his foot off the pedal and let the steel pins drop out of the duckpins. He cleared the dead wood away after each throw and returned the bowling balls.

Crucially, duckpins suffered a technical blow when the Sherman company ceased operations in 1973. Brunswick Equipment offered to buy Sherman’s patent, which would have kept the machinery in production, but he said no—a stroke of stubbornness duckpin bowlers call “The Curse Of Ken Sherman.”

So after 1973 new pinsetters were no longer available for the development of new duckpin centers. Existing operators were forced to cannibalize pinsetter parts off of the bowling houses that closed, often buying the machines and putting them into storage to use for spare parts. The lack of new pinsetters is a significant cause of the decline of duckpin bowling, as it thwarted the growth of new centers.

The other form of bowling found in New England and parts of Canada is candlepin bowling developed in Worcester, Massachusetts in 1880. Candlepins are 15.75 inches tall, have a cylindrical shape that tapers equally towards each end (and therefore having no distinct "top" or "bottom" end, unlike a tenpin), giving them an overall appearance somewhat like that of a candle. The ball used in candlepins has a maximum weight of 2 lb. 7 oz. without finger holes and has a maximum diameter of 4½ inches, making it the smallest bowling ball of any type of North American bowling. Just like duckpin, the bowler gets three balls per frame. However, unlike ten-pin and duckpin, the downed pins (dead wood) are not cleared from the lane after each ball. 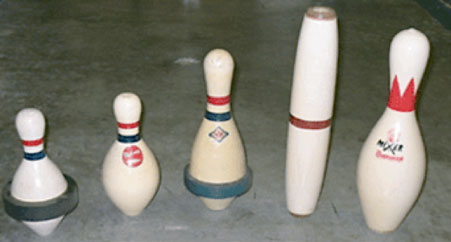 When ten-pin leagues dominated bowling, casual (open play) bowling was only considered a secondary market and not given priority. In fact the very term open play came about to describe when there were open (available) lanes that were not being used by leagues or for tournaments. Leagues and tournaments had all the priority. Open play bowling was only available when sport bowlers didn’t need the lanes. Ten-pin bowling centers were designed and operated for sport and competitive bowling, not the casual bowling public. In fact, the reason that you still see older ten-pin centers with elevated concourses is so the sport’s spectators had a good view. Years ago, some centers even had bleachers on the concourse.

Over the years the situation has flip-flopped for most bowling centers, with leagues now being a minor part of the business and open play the majority. In fact, most of the new boutique, lounge and hybrid bowling-entertainment centers don’t have leagues. And for the ones that do, the leagues are social leagues and not really competitive. Over the years bowling centers have changed many features of their designs to attract the casual bowler. Automatic scoring was probably the first, followed by bumper bowling. Bowler concourse seating has evolved from the hard plastic settee seating with no room for food to sofa seating with coffee tables or tables with chairs. Black light bowling and video masking units have been added to add theatre and create a fun environment.

Although ten-pin bowling has been around for over 150 years, it is not the friendliest form of bowling for casual play. The heavy ball with its three finger holes is awkward to throw and not user-friendly, especially for occasional bowlers and women and children. Over the years ten-pin bowling has tried to make itself user-friendlier with lighter balls for children and women and bumper bowling, but it can still be very intimidating for many people.

Our company’s research has found that the ten-pin bowling ball is seen as a detriment to bowling by much of the public. The large, heavy, three-finger-hole ball is intimidating. And that’s the rub, or at least one of the barriers to increasing the number of people who casually bowl and how frequently they bowl. 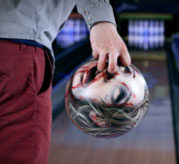 Another negative factor with ten-pin bowling is that the new open play centers are trying to create a social experience facilitated by bowling, not competitive bowling. If the group includes experienced bowlers, and there are still a lot of them around, then they can dominate the high scoring, so everyone isn’t on an even playing field. Also, an experienced bowler often takes the game too seriously, diminishing the amount of fun had not only by that bowler but also by entire group.

We believe it is time to reinvent the game of bowling so it is user-friendly and a better fit for the type of experiences the new entertainment centers with bowling are seeking to offer. However, we don’t really need to reinvent the game of bowling to do that. It’s back to the future with duckpin bowling, the perfect fit for modern bowling with its small easy to handle ball and a game that is different enough that experienced ten-pin bowlers won’t take it seriously. A game that is just fun for everyone.

But what about The Curse of Ken Sherman? Automatic duckpin pinspotters haven’t been manufactured for almost 40 years. Well that is not exactly true. The Sherman pinsetter is what is known as a free-fall pinsetter, the same style used in the US for ten-pin bowling. There is another type of pinsetter called a string pinsetter that was invented in 1963. In a string pinsetter there is a string attached to the top of the pin. The string has no interference with the pins when the ball hits them. At the end of each throw, the machine pulls the pins back into a rack and resets the pins that weren’t knocked down. You might have seen a string pinsetter if you’ve played mini-bowling. 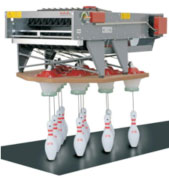 Our company is introducing duckpin bowling to Vietnam at the Da Nang City entertainment center we are designing. The heavy, 3-finger-hole ten-pin bowling ball is extremely un-user-friendly for the Vietnamese as they generally much smaller than Westerners. We have been working with US Bowling Corporation on the development of a string duckpin pinsetter and duckpin lanes for the project. We are also at the preliminary design stages for a social-tainment project in the U.S. that will include duckpin bowling. Not only is it friendlier and more conducive to a group of people having fun, but also it is also a little retro, which is fashionable.

Bowling leagues, tournaments and The Curse of Ken Sherman no longer stand in the way of developing new social-tainment and entertainment centers that feature bowling. So let’s say goodbye to that 3-finger-hole heavy bowling ball type of bowling and let everyone discover how much more fun bowling can really be. It’s back to the future with duckpins. Let the ducks fly!