We’re a little behind schedule getting you this Leisure eNewsletter. The reason is simple; we’ve been very busy with projects that reduced my available time for writing. Fortunately, a few of my recent long flights gave me the time needed.

One of our newest projects is the development of a family entertainment center in Luanda, Angola. Not familiar with Angola? It’s the second country north of South Africa on Africa’s west coast. I flew over there a little over a month ago on a direct flight from Houston to evaluate the site and market. We are currently completing the feasibility study that includes a preliminary site and building plan, a cost estimate and financial pro forma projections. 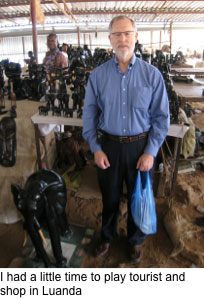 If you’ve heard about Angola, it was probably about its intense civil war that killed millions that started in 1975 immediately after it gained independence from Portugal and finally ending in 2002. Angola is now peaceful and is governed as a parliamentarian democracy.

Angola is rich in oil and diamonds, making up about 60% of its economy. It has the second most oil reserves in Africa after Nigeria. Overall, Angola's economy has undergone a period of rapid transformation, moving from the disarray caused by over a quarter century of civil war to being the fastest growing economy in Africa and one of the fastest in the world from 2004 through 2008. During 2001–2010 Angola has had the world's biggest annual average GDP growth of 11.1%.

Angola has an estimated population of 13 million. Luanda is the capital and largest city with an estimated population of around 5 million. The main reason why so many Angolans live in Luanda was the civil war. Luanda was the safest place in the country, apart from the remote provinces of Kuando, Kubango and Namibe, so people fled from all over the country to seek refuge in the capital. During the civil war the government managed to maintain a ring of security around the capital, allowing administrative and economic activities to continue in spite of the war.

Luanda is a city of contradictions, reflecting the huge gulf between the rich and poor with a growing middle class. On first impression it is a stunning city. Built around a bay, high-rise buildings grace the skyline, but just behind them lie some of the poorest slums in Africa. Luanda is a paradox of squalor and style – at once intimidating and welcoming.

One of the most surprising characteristics I found is that Angolan culture, at least in Luanda, is far less African than other African countries I have worked in. In many respects it’s more European due to the country being under Portuguese control much longer than the European colonial control of other African countries.  There is also a bit of Brazilian influence. 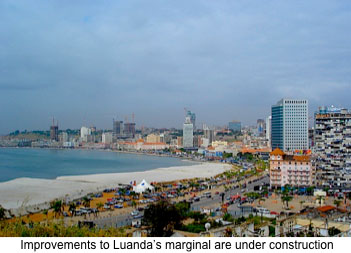 There are enormous amounts of construction underway in Luanda. Since much of the infrastructure was ignored during the civil war and due to population growth, massive infrastructure projects are now underway, including a total reconstruction of the city’s bay (marginal) to turn it into the Rio de Janeiro of Africa.  There are probably more active construction cranes in Luanda than the entire United States. Modern buildings are under construction throughout the city. Check out this web page to see some of the new planned or under construction buildings. Also, to house the many people that moved to Luanda during the civil war and to relocate them from the many slums and poor housing in the city, as well as to reduce crowding and traffic, large satellite cities are under construction by Chinese construction companies just outside the main city. One, Kilamba City, will eventually house 400,000.

Kilamba City, a satellite city under construction just outside of Luanda

We are working on another interesting project – incorporating a popular country singer’s personal brand with an agri-tourism development not too far outside of Nashville. As part of our work on the project we had the opportunity to attend one of our client’s living room concerts in his house on the property where 50 people paid to attend. These types of authentic gatherings are growing in popularity not only with signers, but many musicians. It’s a much more intimate experience when you sit in a performer’s living room and not only see him perform, but also get to meet and talk with him. 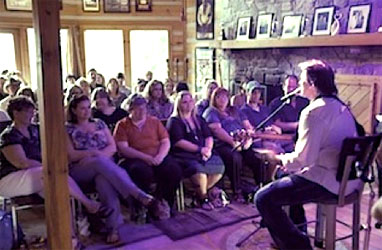 We have two other new projects, but we are currently under non-disclosure agreements about discussing them. One involves an international attraction that is coming to the U.S. Normally our work involves taking American concepts and culturally adapting them to work in other cultures, following what we call the Prime Directive of Location-Based Leisure:

For this project, we are going in reverse, taking a foreign concept and helping our client follow the Prime Directive of fitting it to U.S. culture.

The other new project involves developing an adult-oriented eatertainment project around a very popular brand.

We recently were part of an Experience Design Workshop for our TechShop client. We have also been assisting them in customer profiling and site analysis.

In addition to these projects, we have three hybrid bowling centers in various stages of feasibility and design, we are master planning expansion of an agritainment farm to include a farm market and children’s discovery farm, working with a hobby-toy store that will relocate and greatly expand their experiential and edutainment offerings and continuing our design and production work on the Cairo, Egypt ladies’ club and children’s edutainment/enrichment center.

I hope you find the articles in this edition interesting and useful. As always, we share a lot of statistics with you. We spend a lot of time and money researching statistics and trends, as it allows us to practice evidence-based design for our clients, a decision making process that is based on evidence—research supported criteria, not just opinions that have no supportable basis.