The first of the year has certainly been good for the airline industry, at least in terms of my international travel: first to Beirut, Lebanon, then to Managua, Nicaragua, and then to Querétaro, Mexico. Here's a brief travelogue/commentary on these three cities:

There is so much misunderstanding on the part of Westerners, and especially Americans, when it comes the Middle East. It is unfortunate that the press and popular media fail to give balanced coverage of other countries. Beirut, Lebanon, is no more a city with war, fighting or kidnappings than the U.S. is a land of gunslingers, mafia shootings or high-speed car chases. You can only imagine the impression people throughout the world have of America, based upon the depiction of our country in television, movies and other media. Our image of them is just as distorted as theirs is of us.

Yes, there is still fighting with Hamas along the Lebanon-Israel border, but that is a very isolated situation. Yes, there was a bitter 17-year civil war centered along the "green line" in the downtown business/retail district of Beirut that divided the city into the Muslim West and Christian East. But that war ended 14 years ago. Today, downtown Beirut has been almost totally restored to its former architectural splendor of 200 Ottoman and French mandate-period buildings by the Lebanese Company for the Development and Reconstruction of Beirut Central District, known by its French acronym Solidére. Solidére is a joint stock company, and everyone owning property in the Business District was given stock equal to the value of their property. Downtown Beirut is once again perhaps the only place in the world where East meets West, where Islam meets Christianity, with its mix of mosques and churches, often adjoining each other. Tourists are once again filling the sidewalk cafes that offer Lebanese and international cuisines and are shopping in the upscale stores in this very cosmopolitan city. Beirut is once again becoming the Switzerland of the Mediterranean. And for the most part, Beirut as a whole is far safer than many American cities. Click here to see some photographs of downtown Beirut in 2004. 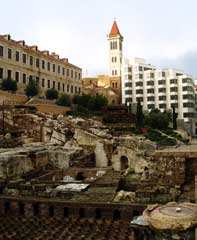 The reconstruction of downtown Beirut included the opportunity for archeological excavations. Beirut's history goes back about 2,500 years to Roman times. Immediately west of the green line, archeological digs are still underway on a 5-acre site that will become the Garden of Forgiveness, a place for reflections and a symbol of Lebanon's multi-religious society. (click to see photos) The two main Roman streets that ran through Beirut have been discovered: Decumanus Maximus, that ran east to west, and Cardus Maximus, that ran north to south. The two roads, believed to have been constructed in 2 AD, were grand streets, raised higher than the other roads, and lined with columns and shaded walkways. They were the place where merchants exhibited their most luxurious goods. Excavation at the Garden has also uncovered what is believed to have been a Roman temple dating back to Hellenistic times. Elsewhere in Beirut, a Roman bath with a hypocaust floor has been uncovered and preserved.

Beirut is fast becoming "the" summer destination and second home for wealthy Middle Easterners from Saudi Arabia, the U.A.E. and other countries. Many are no longer visiting the U.S., due to what they consider insulting visa requirements and entry procedures. Compared to 120º Fahrenheit (50º Celsius) in their home countries in the summer, Beirut on the coast of the Mediterranean with its mountainous suburbs offers a cool (both temperature and fashionably) and sophisticated place to spend the summers.

War has long-lasting consequences, one of which is poverty. War not only destroys a country's infrastructure, but it results in loss of its intellectual capital with the flight of its intellectual and managerial class. So even after the war ends, there are few business people left in the country to start rebuilding the private economy. It takes many years for the business class to return. Many never do. It is still taking place in Lebanon, 14 years after the end of the war. It is believed that more Lebanese currently live outside the country than in it.

We are working with a group of six Arab businessmen from throughout the Middle East that has formed a new NGO (non-governmental organization, same as not-for-profit) to enhance the development and education of poor children. They chose the poor neighborhoods of Beirut as the place to start their program.

Nicaragua could best be described as a country of true resilience. First there was a massive earthquake in 1972 that leveled Managua, killed 20,000 people and left 250,000 homeless. Only three original buildings remain in Managua from pre-earthquake days. Then there was a civil war in 1978 that brought the Marxist Sandinistas to power in 1979. The Sandinista era was when the Iran-Contra Affair took place with the CIA secretly funding the Contra warriors who were fighting the Sandinistas during the 1980s with profits from arms sales to Iran. By 1988, the country was an economic disaster as a result of civil war and Hurricane Hugo, but a temporary truce in the war was achieved. In 1990, democratic presidential elections once again took place. However, things didn't stay peaceful, as there were still struggles between the Sandinistas and the elected government, including several group kidnappings by both the Contras and Sandinistas. Finally, Humberto Ortega, Chief of the Army and a Sandinista, stepped down from office in 1995. Nevertheless, the government that followed was very corrupt. Just last month, former President Arnoldo Alemán, who was convicted of fraud, embezzlement and money laundering for diverting $100 million in public funds, was hauled off to jail for 20 years. It now appears Nicaragua has turned the corner to a stable and non-corrupt government and economic growth.

As you can imagine, the earthquake, civil war, hurricane and government corruption have taken a heavy toll on the country and has led to widespread poverty. Just as in Beirut during the civil war, a great number of Nicaraguan middle- and upper-class families left the country. Many have since returned and are helping to rebuild the country's economy. However, those who grew up in the United States and are now in their 20s and 30s are so totally Americanized they don't know the culture of their heritage. As a result, there is a strong Americanization movement by the younger generation. Although this offers some benefits in terms of economic development and growth, it could well result in a loss of much of the country's cultural heritage and character.

Managua today is a growing city with many modern features, including shopping malls, fast food restaurants and other restaurants such as T.G.I. Friday's, modern supermarkets and other modern facilities. The infrastructure, including the airport, roads and utility services are continually being upgraded to modern Western standards. And there is a lot of housing development. However, there is still a lot of poverty. Hopefully, Nicaragua's expanding economy will continue to create jobs, which will be a partial answer to this problem.

We were pleased to see that one of the most popular medium-priced restaurants was not an American chain, but rather a local chain, Rosti Pollo, that rotisseries chicken over an open fire. Boston Market, eat your heart out. Rosti Pollo's chicken is naturally grown with an incredible flavor. In fact, all the Nicaraguan meats - beef, chicken and pork -- are naturally grown and have delicious flavor and texture. They sort of make American meats seem like jerky in comparison.

Nicaraguans are a very friendly and hospitable people, perhaps the most friendly we have encountered anywhere in the world. They are also very unpretentious. Even the wealthy, who have nice homes, are down-to-earth. They dress moderately, mix with the less affluent and drive non-status cars such as Hondas.

Horses are an important part of Nicaraguan culture, especially Spanish Andalucian horses from Spanish descent. Many festivals revolve around horses.

As in most Latino cultures, celebrations are a vital part of Nicaraguan culture. Birthday parties are large, with as many as 50 to 100 children attending, plus their parents and nannies. And an indispensable part of any birthday party is the piñata. While we were in Managua, we had the opportunity to attend our client's 2-year-old's birthday parties, both at his preschool and the larger family party.

To see pictures of Spanish Andalucian horses and the birthday parties, click here.

Our work in Managua was to preliminarily evaluate potential sites and study the feasibility of developing a family entertainment center.

The importance of families and children to the culture becomes very evident as one travels throughout Mexico. I flew into Mexico City and stayed overnight at the Novotel Hotel in the Santa Fe district. This was a businessmen's hotel, yet in the lobby, there was a small children's play area. Throughout Mexico, many restaurants have children's play areas -- not just the McDonald's, Burger Kings and fast food joints like in the U.S. -- but also many of the full-service restaurants that would be considered more adult than family restaurants (click here to see photos). Children are an integral part of society and fully accepted even in white-tablecloth restaurants, which is often frowned upon in the U.S. At the Querétaro downtown cultural center, there was a dedicated children's library that included about 160 children's computer stations, as well as a high-quality outdoor playground (click here to see photos).

While in Mexico City, I visited La Ciudad de los Niños (Kids City), the model for Wannado in Ft. Lauderdale, Florida, which we wrote about in last month's issue (click here to see photos).

Querétaro, where we are working with a client on feasibility, concept development and site selection for a family entertainment center, is a city that traces its history back to 1531. It was founded that year by the Spanish on the site of an Otomi Indian village, which in turn, dates to about 1427. Querétaro has been designated a World Cultural Heritage Site by the United Nations. Located about 150 miles north of Mexico City with a greater metropolitan population of about 900,000, Querétaro is experiencing rapid growth. This is due to the flight of families and companies from Mexico City and its congestion, smog, high cost of living and crime. Most of that flight is among upper-middle class and higher socio-economic families and the companies that employ them, so Querétaro has a larger proportion of higher economic classes than Mexico as a whole. For example, within the next year, one bank is relocating 2,200 workers out of Mexico City. Some families have relocated to Querétaro, with the father commuting to Mexico City and staying in an apartment there during the week.

In many respects, large areas of Querétaro are like white-collar suburban areas in the U.S. with malls, Wal-Mart, Costco, Office Depot, Office Max, other retail chains and mid-scale chain restaurants. And the weather is wonderful, perhaps best compared with that of San Diego, California, with an average temperature of 72º F. Most of the malls and restaurants, as well as the homes, including the upper-class ones, don't have air-conditioning, as there is rarely a need for it. Much of the dining is al fresco. I stayed in one of the better hotels, the Hacienda Jurica, that dates to 1551 as the largest hacienda (estate/farm/ranch) in the area, and the rooms there had no air-conditioning.

Querétaro is famous for its aqueduct. Constructed between 1726 and 1735 at the request of the Capuchin Nuns to bring water into the city, the aqueduct, has 74 arches, the highest of which is over 7 stories tall. The structure stretches almost 8/10ths of a mile from the east of the city and is connected to underground tunnels to bring spring water from La Cañada, some 5 miles distant. 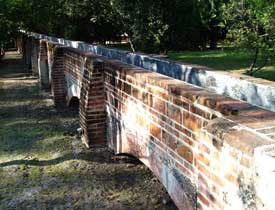 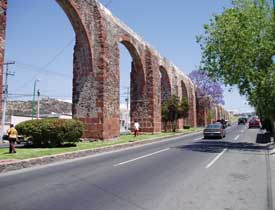