There's been an enormous growth of home video games since the Magnavox Odyssey console was released in 1972 for $99 (around $580 in 2018 dollars). Then a few years later in 1975 video games at home really took off with the release of the home version of Pong.

Since home video game play (now also on portable tablets and smartphone screens) is a leisure time and entertainment activity competing with all other leisure and entertainment activities, including visiting local community leisure venues (CLVs), we decided to take a look at video games' recent growth. What we found is not particularly good news, as it appears that video games are slowly eating local community leisure venue CLVs', including FECs', lunch.

There has been a significant growth of people playing video games on an average day since 2003. * 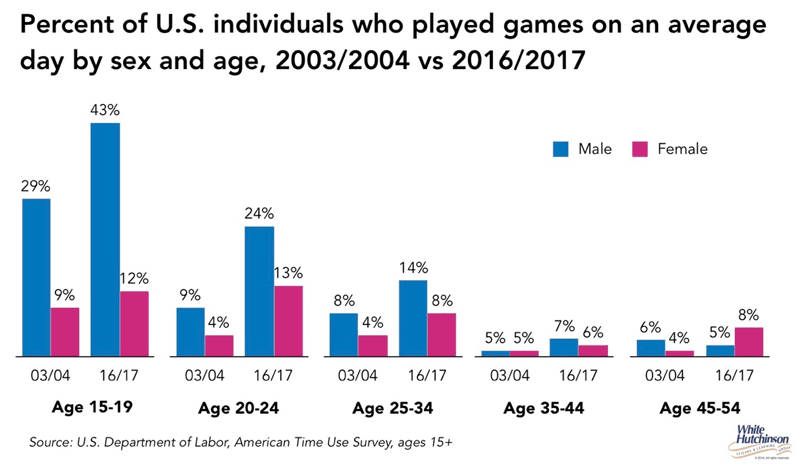 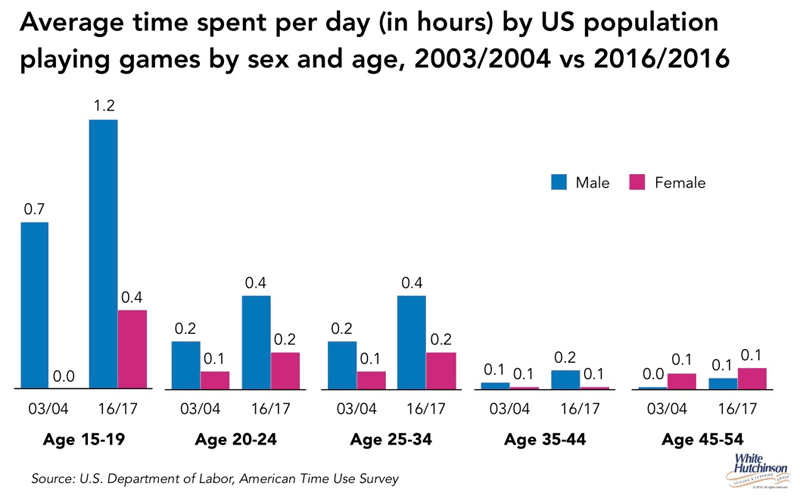 Video gamers spend a lot of time playing games. Nielsen found in 2018 they spend 11% of their leisure time either playing video games or on eSports.

Even more significant is the amount of time that people who played games spend playing them on the average day. Participants between the ages of 15 and 34 spend between 1.7 and 3.3 hours per day playing games.

Nielsen says the increase “has as much to do with supply as demand. The past year has seen a bounty of new titles and experiences designed to appeal to a deeper and broader audience, continuing a decade-long trend of games designed to reach more types of people with varying gameplay preferences, platforms and interests.

“Nintendo continued to draw in a new generation of players with its accessible Switch console, launched in March 2017, and its broadly appealing titles, with Super Mario Odyssey and The Legend of Zelda: Breath of the Wild being among the most anticipated titles of 2017. Gamers were treated to more-powerful hardware in the form of the PlayStation 4 Pro and the Xbox One X, along with a slew of AAA releases in all major genres, such as Call of Duty: WWII (shooter), FIFA 18 (sports), Horizon Zero Dawn (role playing and action-adventure) and PlayerUnknown's Battlegrounds (battle royale). Meanwhile, PC and mobile platforms served up a smorgasbord of titles for every demographic in between with Opus Magnum, Fortnite and Lineage 2 Revolution.”

A considerable amount of the game play is occurring on mobile tablets and smartphones. 60% of players in 2018 were using them, but not necessarily exclusively. Gaming consoles remain the preferred gaming device.

We examined data from the American Time Use Survey and found as the time spent playing games has increased, the time spent attending entertainment and art venues has declined. 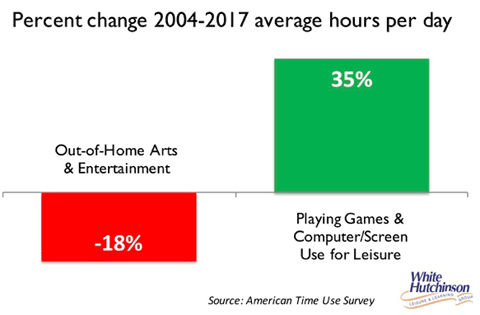 Today Americans age 15+ on average spend almost twice as much time playing video games per day (16 minutes) as they do attending and traveling to and from all types of arts, entertainment sport viewing venues (9 minutes).

Video gamers also spend a lot of their money on video games. Gamers who prefer digital media spend on average $15 per month according to Nielsen. Players who prefer physical packaged media spend $23 per month if they play on consoles and $38 per month if they play on PCs. We examined data from the Consumer Expenditure Survey and find that Americans on average spend more than half as much on video game hardware, software and subscriptions as they do attending local community non-live entertainment venues, which includes CLVs, FECs, zoos, cinemas and museums.

* The data is from the American Time Use Survey category “playing games.” The survey does not separate video games from other games such as board games and card. However, the vast majority of the time shown, and most of all the increase in time, is attributable to video game play.