Originally published in May 2010 edition of RePlay magazine.

The Impact of the New Grounded Consumer on Location-Based Entertainment

.The Great Recession has had a dramatic impact on consumers, their values and spending. Consumer spending is down. When consumers do spend, they have shifted what they spend on and even where they spend. And they are doing more things at home rather than going out. Consumers’ new frugal and practical behaviors are becoming ingrained and are reshaping consumer consumption patterns in ways that will persist for many years, even after the economy rebounds.

Research shows that the recession is not the sole cause of this behavior shift. The trend was well underway prior to the recession. People de-cluttering, living simpler and spending less started at least a decade ago, and those that didn’t start then had intentions to do so. The recession only caused the trend to become mainstream.

What will the post-recession landscape look like for location-based entertainment (LBE) businesses? Our company is fortunate to have access to vast amounts of consumer data as well as our own proprietary research. We track consumer trends so we can help our LBE clients not only plan for success in the present, but the future as well. During the past 1.5 years, there has been extensive in-depth research on the long-term impact that the recession is having on consumers. There is unanimity with all the research – the Great Recession has permanently transformed consumers into what is being called the grounded consumer. There will be no return to the way things were before the recession.

This recession has been different than any others not only because of its severity, but because it has resulted in the crystallization of many values people were reassessing even prior to the economic crises. Context-Based Research Group, an ethnographic firm, says people are coming to age, experiencing a major epiphany of how life works, which triggers a rite of passage, resulting in a major life transition that leads to new attitudes and new ways of acting in the world. Context’s research shows that “the changes in behavior we are seeing are a permanent shift and not merely a temporary holding pattern because the changes come from self reflection and an evaluation of personal values.” Their research shows that 93% of Americans have become more strategic in how they spend, evaluating how their purchases fit into their lives rather than purely seeking instant gratification. In other words, consumers are now making values-based decisions about their spending.

Research by many other highly respected companies confirms the trend of American society’s transformation away from aspiring to materialism to aspiring to a life better lived. What we are seeing is a structural paradigm shift from an egocentric Me Economy to a socially conscious and responsible We Economy that places higher value on family, community and the world as a whole.

On top of the new set of consumer purchasing values, we are also seeing a permanent reduction in consumer spending. Consumers will, at least for a very long time, not spend beyond their means as in the past. Their homes are no longer ATMs, credit is no longer free flowing and people now understand they need to save for tough times.

One of the first things to recognize is that ‘value’ for the grounded consumer deals with many more issues other than just price. What constitutes value with purchases and values in peoples’ lives now have whole new definitions. Consumers have transitioned to a more thoughtful perspective on value. They are less impulsive and more disciplined and purposeful in how they spend, evaluating how their purchases align with their values rather than purely seeking instant gratification. They now understand that most possessions do not bring lasting happiness, but that experiences can. Consumers have become more socially conscious and responsible. Their societal and emotional bonds now have greater importance. They are looking for a more meaningful life. Welcome to the new normal of the grounded consumer.

With the purchase of stuff having less importance in peoples’ lives, we are seeing people moving up the progression of economic value to experiences, a trend first identified by Joe Pine and James Gilmore in their 1999 book The Experience Economy: Work is Theatre & Every Business is a Stage. Their basic premise is that developed economies have entered a new economic era called the experience economy where the highest-value offerings are experiences. The progression of economic value starts with raw commodities that are transformed into goods, which are then wrapped in services and finally transformed into experiences. Each level increases the total value to the customer. Goods and services are no longer enough. 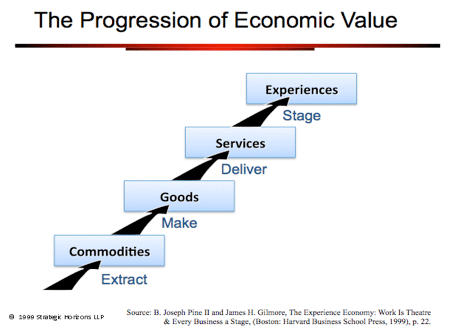 Experiential purchases such as dining out, going to the movies, bowling, miniature golf, etc. make people happier than possessions. You don’t get bored of happy memories like you do with material possessions. Bowling has long thrived because of its social aspects. People who bowl together pay money to the bowling center as much for the social aspects as to bowl. The recession has caused people to place greater emphasis on their social bonds with family and friends. People fulfill their need for that bonding when they have experiences together.

Digging deeper into the data shows that the greatest decline in out-of-home entertainment spending has been with lower income households. The lowest income quintile (20%) of households saw a 37% decline in spending in inflation-adjusted dollars, whereas the highest quintile’s spending decreased by only 0.3%. The top 40% of households accounted for 76% of all out-of-home entertainment spending in 2008, an increase from 71% in 2000. 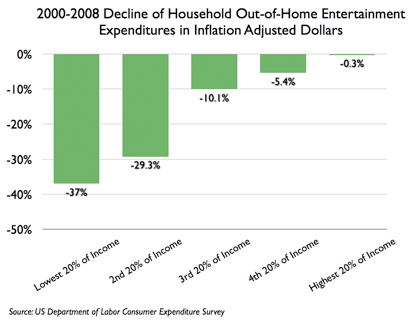 The preceding data, however, does not reflect 2009 expenditures, which are sure to have been negatively affected by the recession during which consumers learned that at-home entertainment can be less expensive or have no cost and be just as or even more satisfying than many out-of-home entertainment options.

The grounded consumer is much pickier and demanding about what value means to them; they now feel entitled to value. They require more than in the past in order to get them to part with their money and time, including such factors as quality, customer service and expenditures that deliver long-term outcomes. The recent success of the movie Avatar in its 3D version at a premium ticket price speaks to the importance of increasing the value of the experience compared to the past and its electronic competition, in this case, 2D movies at the cinema and large screen high definition televisions in the home. Panera Bread and Chipotle are also good examples of this phenomenon. During the recession neither discounted their menu prices nor offered coupons, and yet their same store sales increased, unlike the decrease at most restaurant chains. This all demonstrates that value now means much more than just price.

The citizen consumer has raised the bar further, as consumers are now concerned with the environmental, ethical, moral and societal values of the companies they do business with. Research shows that the green practices of location-based attractions affects how likely people are to visit them and that many people are willing to pay a premium price if the facility is green. And when it comes to children, research shows that they are even more environmentally conscious than adults.

So what do these new values and the permanently reduced spending mean for LBEs? For the industry as a whole, it is actually generally good:

So to attract consumers out of their homes and get their money out of their purses and wallets, location-based entertainment businesses will have to offer higher quality and better value than in the past. They will also need to be more focused on targeting the higher socio-economic households who control most of the spending. This includes offering higher quality facilities, improved guest service and experiences appealing to the grounded consumer’s aspirations for improving themselves and their children, strengthening their family and social connections, and being good to society and the environment, as well as having fun. As a result, the models for out-of-home entertainment need to quickly evolve, with edutainment, eatertainment and socially focused derivatives growing in attractiveness.

The Great Recession has permanently raised the bar, which will only continue to go higher. Consumers will still continue to leave their homes for entertainment. However, they will be much more discriminating and demanding than in the past. Many older formula LBE businesses will become part of the industry’s history. Those facilities that reinvent themselves for the new grounded consumer’s value equation will prosper.