An earlier version of this article appeared in the Feb-Mar Leisure eNewsletter.

Is declining cinema attendance a bellwether for all location-based entertainment venues?

The figures are in for North American (U.S./Canada) box office 2011 movie attendance and they are not good. The decline in movie attendance that started back in 2002 continues. The following chart shows per capita movie attendance (average annual attendance for the entire population) and ticket prices in 2011 dollars. In 2002, the average person attended 4.93 movies a year. Last year it was down to 3.70 times, a 25% decline in average per capita attendance. Over those same nine years, the price of a ticket rose from $7.31 to $7.99 (inflation-adjusted). 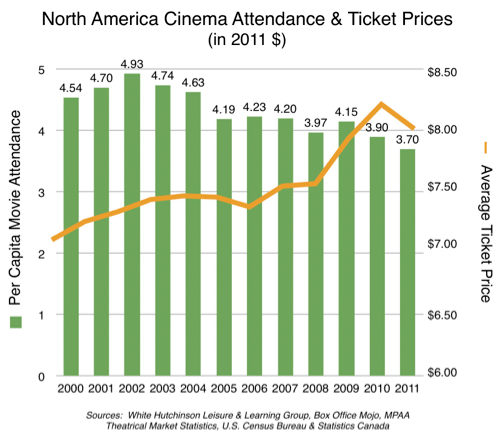 If you ask the movie theater industry, they will often blame declining attendance on the quality of the films. But if you go back and examine the films produced, that doesn’t explain it. Yes, one or two different years might have not had the greatest films or many blockbusters, but that doesn’t explain a consistent nine-year trend. Even the blockbuster film Avatar in 2009 didn’t bring per capita attendance back up to what it was just two years earlier.

One reason for the decline is plain economics. The cost of a movie ticket is increasing, far faster than inflation. So the movie theater is becoming less affordable. Since 2002, the price of an average movie ticket has increased 9% in inflation-adjusted dollars. In their June 2010 American Pulse survey, BIGresearch reported that 72% of Americans now consider watching movies at the cinema as too expensive.

But there is another underlying root cause, even more significant for the declining box office, the growth of consumer digital electronics and technology, including the Internet, what we will call digital technology. What digital technology has brought us is easy and cheap (or even free) access to multiple forms of entertainment at-home and on our mobile devices. This of course includes films and video. We can now view movies in the comfort of our homes on big screen high definition televisions that have gotten very affordable. We can instantly stream them via our cable company, Netflix or other Internet-based services. You no longer have to drive anywhere to get the DVD at Blockbuster or RedBox. And heck, you don’t even have to get dressed to watch. Just settle down in the lounge chair in you PJs, skivvies or nothing at all if that is your choice. And if you want to view films in Blu-ray quality, Netflix will have the disc delivered to your mailbox in a day or so. Still no need to drive anywhere and burn gasoline.

Viewing movies is not limited to your home TV. You can watch from anywhere on your computer, iPad or hand held device. Digital technology allows entertainment to reach us instantly, at any time and any place, with little effort and cost, including often for free. And for the easy access and low cost, we’ll trade off on quality. Watching a streaming film on a TV, smart phone or iPad is certainly not the same experience as watching the same film in the movie theatre. But it is sure rates higher in what we call convenience (cheap and easy).

So how do movie theatres overcome the trade off people are making for the quality of experiencing a film in the cinema to the convenience of watching it using digital electronics? It’s by raising the quality of the cinema experience to what we call high fidelity. The more digital technology makes some activity more convenient, the more location-based businesses have to raise the fidelity of the experience they offer to counter the increasing attractiveness of convenience. Offerings that are at one extreme or the other – either high in fidelity or high in convenience – tend to be successful.

The following graphic shows the progression of film viewing experiences over time – the increasing convenience with digital electronics versus the increasing fidelity in the cinema.

As digital technology advanced and reduced in price, cinemas upped the quality of the movie going experience. What worked for cinemas in the days of cathode ray tube TVs and videotape rental no longer cuts the mustard. Today, to compete against the convenience of in-home and mobile digital technology, cinemas have had to raise the fidelity of moviegoing with 3-D, state-of-the-art sound systems, plush stadium seating, reserved seating, dine-in theatres and even restaurants and lounges. The more convenient digital technology makes watching a movie elsewhere and anywhere, the more cinemas have to raise the bar on the fidelity end to continue to capture moviegoers. And with that, the price of going to the movies goes up.

The last place an entertainment experience wants to end up is in what Kevin Maney calls the fidelity belly.  In his book Trade Off, he defines the fidelity belly as things that fall into the middle with moderate fidelity or convenience, so they fail to win an enthusiastic audience, i.e., lose their popularity.

The big issue for movie theatres is whether the public now considers the value of attending to be commensurate with the price. The dropping per capita attendance indicates maybe not.

Steve Thorburn PE pointed out in an article in one of Thorburn Associates’ pastnewsletters that the movie theater industry’s recent switch from film to digital projection has decreased the fidelity of watching a movie rather than increased it. As Steve explained, digital projection gets you 2048 dots or pixels across the projected image, no matter what the screen width is. He went on to explain that the resolution of film varies depending on who you speak with, but if we split the difference it ranges from 4000 dots for 35mm film up to 8000 dots for 70mm film. This means that digital projection only gives you 1/2 to 1/4th the amount of picture information that film does. Steve says this is “just slightly better than really good broadcast TV on an old tube television set.” He says that on an 80-foot wide screen, the resolution is only 25 pixels per foot or two dots per inch of screen. On a 50-foot wide screen, it’s 4.2 dots per inch, very grainy in film terms. Steve feels digital film shouldn’t be shown on a screen wider than 16 feet, which gives you 125 pixels per foot, still not competitive with a good home theater with 480 pixels per foot.

AMC Theaters, one of the country’s largest theatre chains, has introduced Enhanced Theatre Experience (ETX) in many of their theaters’ larger auditoriums. AMC says ETX auditoriums include a 20% larger screen, an upgraded sound system and digital projection that produces images at a superior resolution of 8 million pixels, a higher resolution than HD (2 million pixels).

We went back to Steve Thorburn and asked him how ETX compares with film. Steve told us ETX has 4096 pixels across the screen, only twice that of regular digital, so the image is still no better than 35mm film on a small screen. He says when you blow ETX projection up to an image on a 55-foot wide screen, that’s only 6.25 pixels or dots per inch.

So the bottom line is that with the switch to digital projection, cinemas have decreased the quality, the fidelity, of their core product, the visual film image.

What’s crazy is that AMC charges a premium ticket price of an extra $4 ($5 for 3D) to see an ETX movie that is nowhere near the quality and resolution of the film version you would have seen in the same first-run 70mm large-screen auditorium at a regular ticket price several years ago. Unless we missed something, this is charging a higher price for a lower fidelity experience. Its no wonder cinema attendance is on the decline.

Another issue with cinemas is a conflict between of the needs of younger Millennial and C Generations and older generations. The younger generations don’t understand why they can’t text or post to FaceBook in a movie, which upsets the older generations, when they do it every other waking moment of their lives. Young people seek out experiences that can be very social, which is contrary to sitting in the dark auditorium totally focused on a screen and not communicating with companions or friends in any way. At-home or shared movie viewing on a mobile device does a much better job of meeting the younger generations’ needs and is probably a factor in declining movie attendance.

Rich Greenfield, one of the media industry’s watchers with investment advisor firm BTIG, in his predictions for 2012, said, “We believe consumers are tiring of expensive, premium-priced movie experiences, particularly when combined with an increasingly unsatisfying exhibition experience.” BTIG said in one of their reports, “We expect movie attendance to fall yet again in 2012; more importantly we believe attendance is now in secular decline in the US.”

What our company’s continuing research shows is that the trend we are seeing with movie attendance is occurring with other forms of out-of-home entertainment and leisure, including cultural institutions and even sports. Market share is shifting from real world venues to the virtual world. The audience, the percentage of the population that attends, is declining and those that attend, are attending less. Additionally, a higher percentage of those who are attending are coming from higher socioeconomic households, a trend called social stratification. Out-of-home entertainment and leisure is losing the middle and lower socioeconomic as its audience. The audience is migrating, even more so than the higher socioeconomic, to the convenience of digital technology and the virtual world options it offers.

The trade-off between fidelity versus convenience is just as true for other forms of location-based entertainment (LBE), including the various forms of family entertainment centers, and is resulting in an overall decline in per capita attendance and social stratification. Technology is pushing the boundaries of fidelity and convenience, continually raising the bar at each end for entertainment. Those LBE concepts and FEC centers that were successful maybe a decade ago have now fallen into the fidelity belly due to the increasing selection and high convenience of entertainment offered by consumer digital technology and the increased fidelity of higher priced LBE concepts such as the major theme parks. It’s no different than what happened to the music CD. Downloadable and now streaming cloud-based MP3 music on the convenience end and high fidelity rock concepts on the other end landed CDs in the fidelity belly. 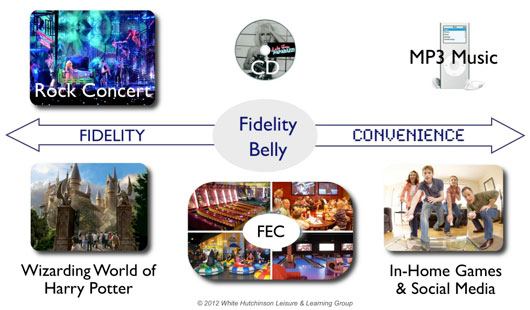 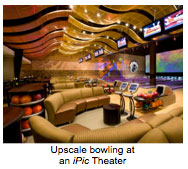 There are segments of the community-based LBE & FEC industry that have ratcheted up their fidelity to counter the increased convenience of digital technology. These centers are addressing the competitive social-entertainment space that digital technology has done such a great job of capturing. Good examples are the new upscale hybrid bowling centers and bowling lounges designed exclusively for open play (no leagues). In addition to a upscale interiors, finishes and ambiance, they offer sophisticated food and beverage options (the one thing the virtual world can’t offer), improved customer service, large up to four-lane-wide video masking units at the end of the lanes, night club quality lighting, lounge style furniture and many other enhancements. These centers are also addressing the social stratification trend by targeting the higher socioeconomic who are an increasing proportion of the market and who are willing to pay a premium price for a higher fidelity experience.

What is happening to cinemas with their continual decline in attendance will happen to other forms of LBEs if they fail to continually increase their fidelity to appeal to consumers who are increasingly being drawn to more and higher convenience digital technology entertainment options. Falling into the fidelity belly is the route to becoming road kill, and no business wants to go there.