Box office ticket sales at North American movie theaters increased 4.9% in 2018. However, over the same one-year time span, the population increased by just short of one percent. So as a result, per capita ticket sales increased by 4.0%, with the average person attending the cinema just 3.5 times in 2018 and spending an average that year of a total of $32.39 for tickets.

Although that was an increase from 2017, it doesn't really mark a turnaround in the long-term 28% decline in per capita movie theater attendance from its peak of 5.2 times per year in 2002. 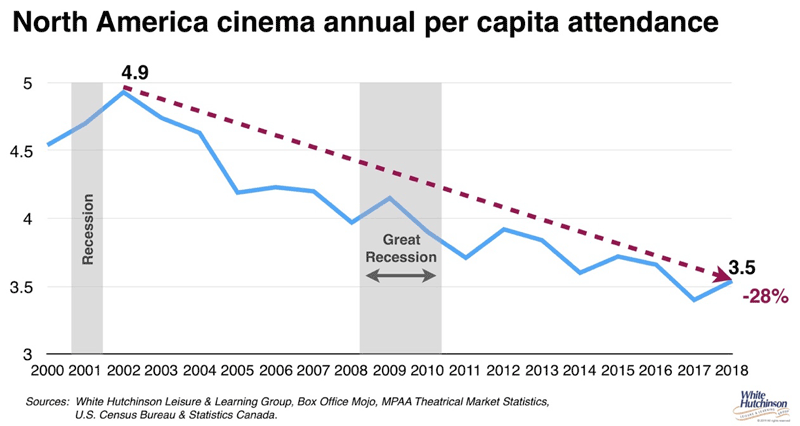 This is consistent with the overall trend our research shows for out-of-home entertainment. The population overall is going out less, and when they do, they are diversifying the various venues they visit.

The box office results for 2018 also confirm another trend we have been writing about - to get people off their couches and out of their homes to entertainment venues, you have to offer a High Fidelity experience to overcome the appeal of the convenience and low cost of all the at-home and smartphone screen digital entertainment options people have today. In 2018, the top 10 grossing films accounted for one-third of all box office revenues and ticket sales. Those films are what are known as “event movies,” the films whose release itself is considered a major event with so much appeal you just don't want to miss out. Even more significant is that of the 242 wide-distribution films (those shown in 600+ theaters) in 2018, those ten films were only 4% of all the films. So, 4% of the films accounted for 33% of all revenues and attendance. It is also significant to note that eight of the ten were available in 3D and all ten where also found in IMAX screens. So, in addition to great stories and performances, they were truly high fidelity in terms of the visual presentations. In the cinema world, it's only the highest fidelity films in all aspects that win. 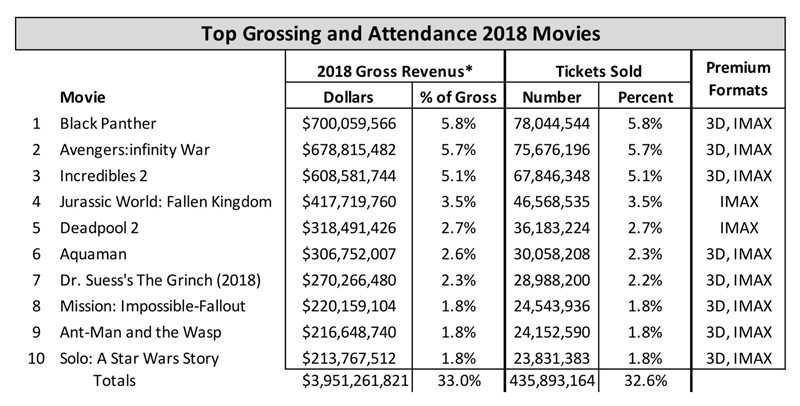