Binge watching is not good news for CLVs

Due to advancements in at-home technology, the lounge chair and sofa at home has grown as competition to community leisure venues (CLVs), including family entertainment centers (FECs). Now thanks to Netflix, Hulu and Amazon Prime, we have the binge-watching trend, or should we say addiction. The allure of commercial-free viewing and ‘play next episode' easily keeps people glued to the couch for extended time periods. And now, if you're entrenched in binge watching, you don't even need to stop to cook, as you can just order in meals from a wide selection of restaurants using home delivery.

Today, there's a whole lot of binge-watching going on occupying peoples' leisure time. Sixty-nine percent of U.S. households have a subscription video on-demand (SVOD) service from Netflix, Amazon Prime and/or Hulu according to 2018 research by Leichtman Research, That's up from 52% in 2015. Deloitte's Digital Democracy Survey found that nearly three in four Americans (73%) said they had binge-watched, defined as three or more episodes of a show in one session, in 2017, and it's not just younger people. Here's the frequency for binge-watchers age 13+. 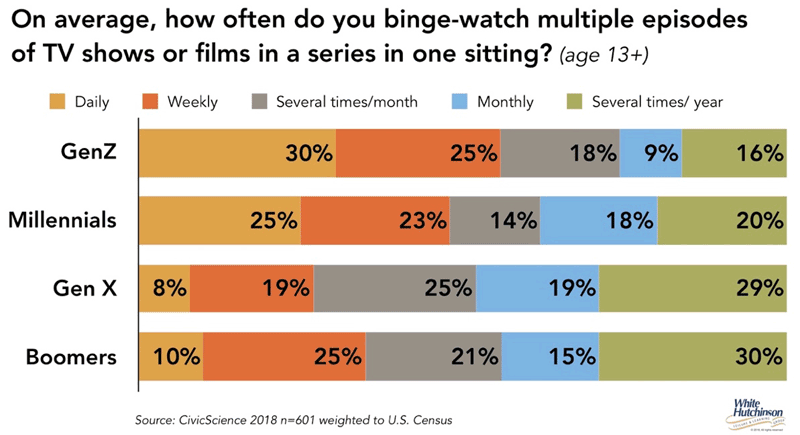 Psychologists report that for many people binge watching actually becomes an addiction. This makes it a type of at-home entertainment that poses greater competition to out-of-home, location-based entertainment than regular TV or video streaming, as it hooks many people to their screens. Watching TV/video is already the major form of competition to CLVs, as it takes up more than half of people's leisure time, far more than any other activity. The increasing percentage of the population subscribing to SVOC services and the strong appeal of binge-watching is not good news for getting people away from their screens for attendance at out-of-home entertainment, arts and sports venues. Today consumers on average spend 165 minutes each day watching TV and just one 20th of that amount of time, only 9 minutes, attending arts, entertainment and sports events. Binge-watching is only increasing the appeal to keep spending that much time watching the TV versus increasing the time to attend leisure venues. 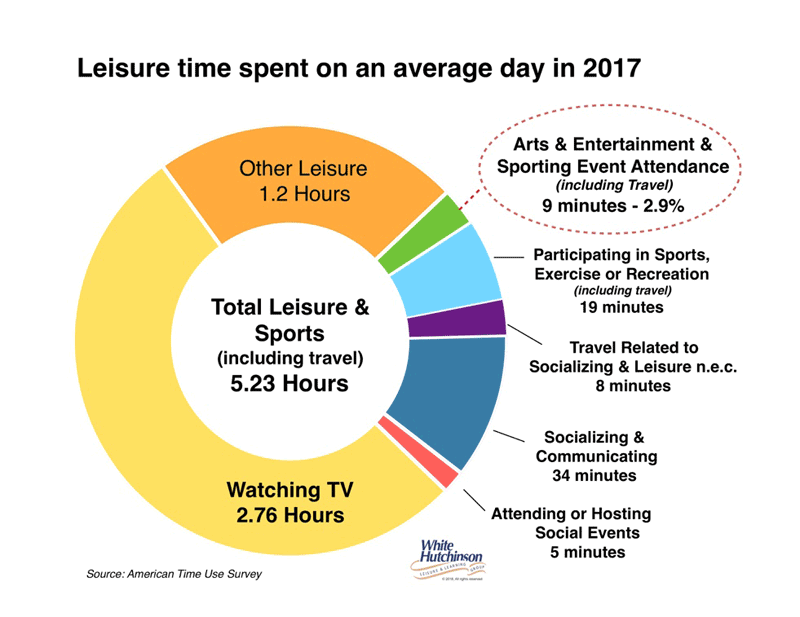