Are family entertainment centers on the brink of extinction?

There's a number of demographic and market forces shaping the future of the out-of-home (OOH) entertainment industry and especially the viability of family entertainment centers (FECs). 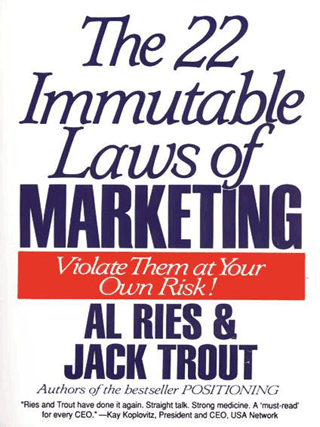 Back a quarter century ago in 1994, marketing gurus Al Ries and Jack Trout, published the classic book on marketing, The 22 Immutable Laws of Marketing, Violate Them at Your Own Risk!. By marketing, they weren't referring to advertising, but rather marketing in its broadest sense, designing the consumer offering so it will be successful. The book discusses basic universal principals or laws of marketing that have been proven over time for all categories of consumer products and services and are immutable, not capable of or susceptible to change. The book's 22 laws of marketing apply just as much today as they did back in 1994 on how to succeed with any consumer offering, whether it is a product, service or experience.

The advice in The 22 Immutable Laws of Marketing is simple and straightforward: be first in the customer's mind. If you're not first, create a new category you can be first in. Position yourself clearly against your competition and stay consistent with your position.

What we see too often with community-based leisure venues and especially for FECs, is that for some reason developers and owners don't understand that these immutable marketing laws also apply to them. They try to follow what they think works, when in fact what works is counterintuitive to their thinking, which has been proven wrong over and over again in the world of marketing. For some reason many developers and owners think family entertainment centers are some unique category with their own unique set of marketing laws. How wrong they are.

Here's a number of those “Immutable Laws” that we find many FECs fail to understand and follow.

Here's where so many FECs miss complying with these immutable laws at their peril:

Back when the indoor FEC concept was first evolving and competition was limited, the first centers opened with the concept they would win by being first for everyone (Law #1). And with so little competition back then, that worked. They catered to the entire family, which they considered all age groups, offerings things for children, teenagers, and adults. The problem was that they had so many attractions and they targeted so many customer markets, they didn't own any one word (Law#5). They couldn't own the word entertainment as it includes a wide range of things you could do besides what they offered. In fact, what they offered isn't really entertainment according to the Merriam-Webster and other dictionaries:

And they didn't own the word ‘family entertainment' as their mix of attractions covered all ages. They weren't special to anyone (Law#13). Yes, they were first, but the industry quickly evolved and more specialized concepts focusing on narrow market niches and types of activities evolved such as children's entertainment centers, adult-oriented facilities (Dave & Buster's), social eatertainment venues etc. (Law#5 & Law#10). These concepts owned a word category and also gave up part of the market to do a better job with a market niche (Law#13). Centers that did a better job with just one attraction, such as laser tag, took over ownership of those attraction categories (Law#5 & Law#10). Now those new concepts owned words that catered to more focused markets (Law#2 & Law#5) and were first in mind for those categories (Law#3). The original FECs “with a little bit of something for everyone” no longer had much appeal for adults coming without children and for children-focused activities. Categories continued to evolve with different types of children's centers offering specialized attractions such as edutainment, trampolines, play cafes; and different types of adult-oriented centers, such as bowling lounges, restaurant and bocce ball, etc. (Law #2). 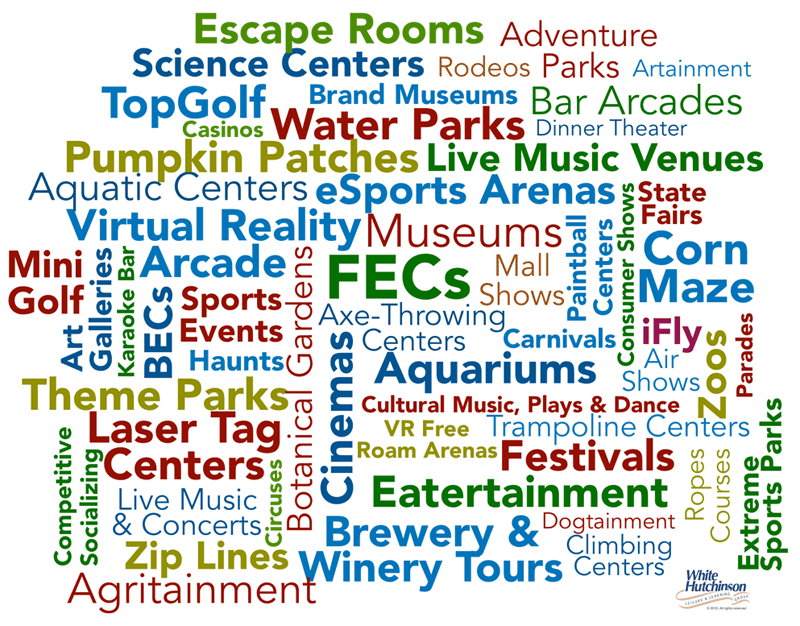 Over the past few years, there has been an explosive growth in the number of OOH entertainment and leisure options.

Unfortunately, even today after decades of evolution in the industry, we still have FECs being developed on the same philosophy of offering a little bit of something for everyone. Meanwhile, the entire industry (which we call the community leisure venue (CLV) industry since family entertainment no longer fits) has fragmented and become much more specialized, segmented and niche-market-focused with different centers only targeting children, ones targeting young adults, and with a diversified category of specialized entertainment for each, such as trampoline centers, boutique bowling, bar arcade, eatertainment with interactive social games for adults, etc. So, the original style FEC is no longer special for a large segment of the market other than perhaps families - parents and guardians attending with their children from around age 5 up to around age 14. Classic FECs have lost market share for large segments of the OOH entertainment market to more focused concepts. The classic FEC has become a niche concept only appealing to families with children.

Now changing demographics are putting even that niche market in further peril. We've previously written about the baby bust that doesn't seem to want to stop, fewer and fewer births every year. As a result of that and other cultural changes, the family market is shrinking both in number and as a percentage of the population. We've analyzed the changes since 2007 for households with children under age 18 and for households with children under age 12. Here's the results.

When we look at what may be the prime age for community-based OOH leisure, adults ages 25-44, the trend is just as grim for the family market. Since 2001, the number of those age adults with children <18 has declined by more than one-tenth (-11%), with 5.1 million fewer adults. At the same time, the number of adults without any children <18 has grown by one-quarter (+24%), by 8.3 million. 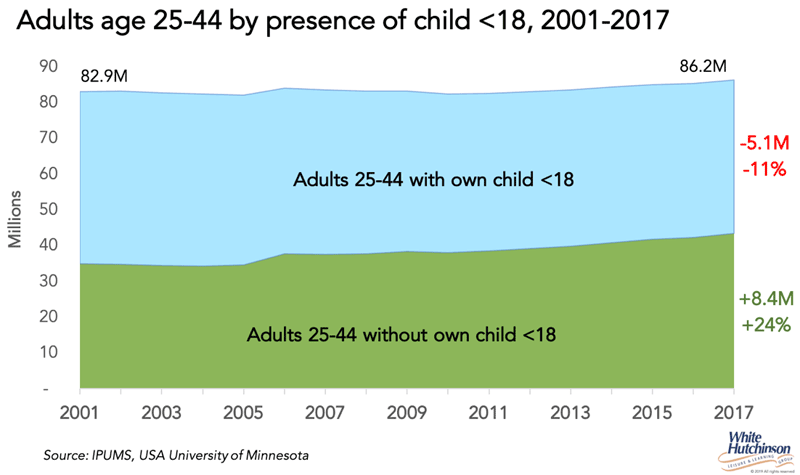 With the continuing baby bust, the trend of a continuing decline in the number and share of adults and households with children will continue into the future.

If you're thinking about developing an FEC that replicates the formula from the early days of the industry, beware, as you will be violating many of the Immutable Laws of Marketing and bucking market growth and demographic trends. In fact, any concept that targets families, adults with children, will find a shrinking market in most areas of the country.