The cannibals are eating the CLV industry

No, we're not referring to a group of zombies. It's the concept of cannibalization that is well understood in the out-of-home (OOH) entertainment industry, especially as it applies to gamerooms and attractions. In essence what cannibalization means is that adding new games to a gameroom does not necessarily mean that the gameroom revenue will increase. Rather, the new games may just cannibalize revenues from the existing games, as guests will only spend so much money in the gameroom on each visit. The same is true with attractions. Adding a new one will not necessarily increase overall per capita spending, as some of the spending may only shift from existing attractions to the new one.

Unfortunately, that is exactly what is happening in many major markets across America. Well-capitalized community leisure venue (CLV) chains such as Dave & Buster's, Top Golf, Punch Bowl Social and Pinstripes are growing their number of units while at the same time smaller CVL chains and entrepreneurs are chasing their dreams opening FECs, escape rooms, arcade bars, axe throwing venues, virtual reality centers and many other types of CVLs, while at the same time some retailers are even adding entertainment to their stores to attract consumers away from their e-commerce options. This is all happening at the same time that the population is decreasing their overall participation, time and spending at OOH entertainment venues due to all their at-home digital entertainment and socialization options.

Our firm is increasing being hired by existing CLVs to help them develop strategies to stay profitable in the increasing competition OOH entertainment landscape. They all worked great during the first six months or so after they opened due to their newness or uniqueness. Then all of a sudden attendance starts to drop as there are fewer and fewer new people to attract to try it out for the first time, the novelty wears off, and there is limited if any repeat appeal as the first time customers move on to check out all the new options that are opening or the existing higher quality CLVs win them back as the new ones are only mediocre or based on some out-of-date CLV business model.

Here's the actual attendance history of one existing CLV client we are working with. 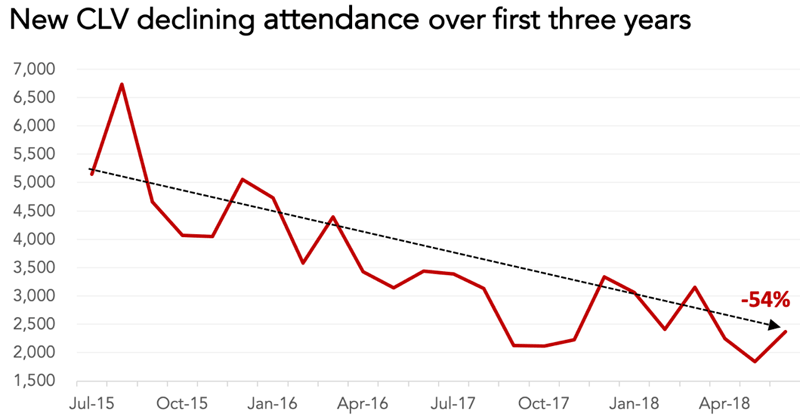 If you have any doubt about how competitive the OOH entertainment and arts (E&A) landscape is today for a shrinking share of peoples' away-from-home time, attendance and spending, we recently consulted with another FEC in a major market that has decreasing sales. We counted the number all the brick-and-mortar E&A venues excluding movie theaters. For places like concert halls, performing art centers and live music venues, we counted each as having only 2 limited-time events a month. We also examined the number of other one- and limited time experiences (O&LTEs) such as festivals and fairs (we're sure we missed finding many). Excluding movie theaters, we ended up with 1,101 different venues and O&LTEs. They were serving a population of 1.25 million. With each person on average visiting venues or O&LTEs a little over once month excluding movie theater attendance (14.9 times a year), the venues and O&LTEs only average an attendance of 16,900 each.

With many venues needing attendances in the 100s of thousands, it is easy to understand how that market is over oversaturated with OOH E&A options and why our client and many other CLVs are struggling for sure.

Here's a map just showing just the traditional type of CLVs, such as FECs, in that market. 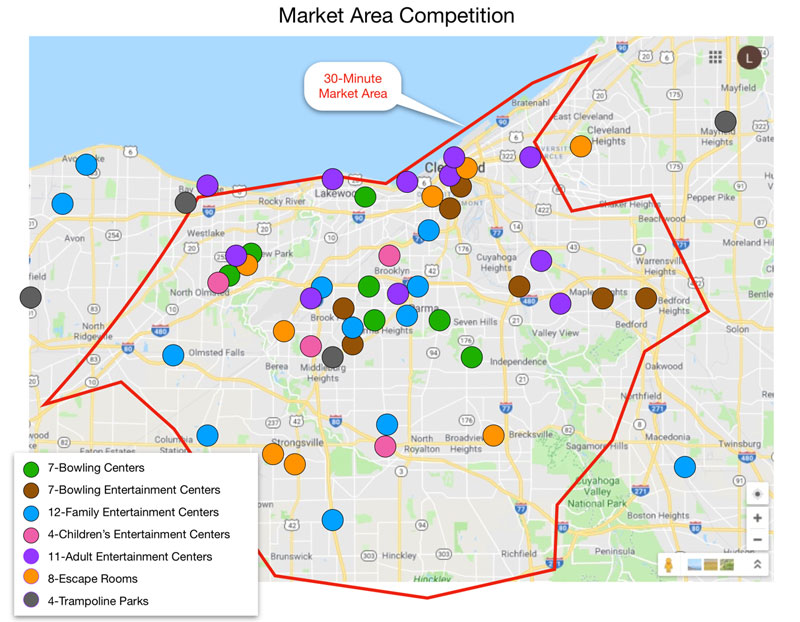 We have other clients that we are working with to try to rehabilitate their businesses that have similar single-attraction and multi-attraction old school business CLVs with similar attendance declines, all in major markets. All have seen expanding OOH leisure options open in their markets. Unfortunately, all based their decisions to open based on feasibility projections by well-known industry consultants and by suppliers who based their projections on industry conditions years ago rather than realistic competitive conditions today.

This decline in attendance is becoming endemic with too many CLVs due to the over expansion of the industry and the prevalence of old-school models, targeting the middle class and/or just plain mediocre based on contemporary consumer expectations of what it takes to attract people out of their homes to spend their limited leisure time and disposable incomes. Once a CLV becomes mediocre in the eyes of consumers, it just becomes a commodity, where the only possible way to gain market share is by price, a spiral to eventually closure.

To succeed with all the competition for the consumer's disposable leisure time both today and into the future, you need to really stand out from the crowd and have high appeal to modern consumers. The problem with the single-attraction and old school business models is they are focused on the attractions, rather than offering a high quality holistic experience that incorporates not only the entertainment, but food, drink, service and the ambiance, all facilitating an appealing social experience. The entire experience needs to be what we call High Fidelity.

In this issue you can read what one veteran operator, Jim Kessler of Lasertron, has to say about this - click here.

Also check this issue's article on the importance of ambiance - click here, Linda's review of a new and appealing CLV in Kansas City - click here, and how the lives of trends and new attractions is becoming shorter than in the past - click here.