When most people design and operated location-based entertainment centers, they rarely think about gender from the standpoint that there are significant differences between men and women. Yes, sometimes we’ll doing a better job of finishes for the ladies restroom, often even implementing potty parity—more toilet fixtures in the ladies’ than the men’s restroom.  But there’s more to it than that.  The differences between what appeals to the two different genders are great and need to be carefully taken into consideration in both design and operations to maximize guest satisfaction and profits.

Research from the Nielsen NeuroFocus study found that there are major differences between men and women in how we think, react, shop and watch. It’s because our brains are different, which affects how women and men process information, express emotion, interact with others and approach their daily activities, including at-home and away-from-home eating and drinking and at-home, digital media and location-based entertainment (LBE) venues.

The research found that women’s brains are hardwired for:

On the other hand, men’s brains are designed for:

These brain wiring and processing differences affect our preferences, and sometimes those preferences are exact opposites. Here are just a few examples: 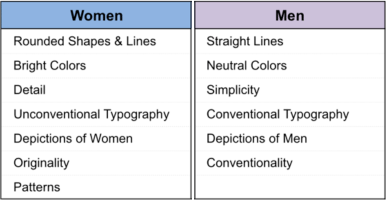 We can walk into almost any FEC or LBE and immediately tell whether a man or women designed it. Most times we see the strong influence of androcentrism (male-bias) in every aspect of the center and its operation, as men still dominate the design professions and ownership of and management of LBE companies. Androcentrism works for a sports bar or a “breastaurant” (Hooter’s et al.), but a male-biased design isn’t the optimal approach for other types of restaurants and LBEs including FECs, children’s entertainment/edutainment centers and adult entertainment venues, where research consistently shows that women still have the majority influence on where a couple or family visits.

Gender differences are just as pronounced for girls and boys. Research by Lego has found these differences in children age 5 and older:

One of the barriers to maximizing success, which we constantly see in the location-based entertainment center, is that most centers are designed by men for men due to androcentrism. So most centers are great for men, but fail to have the maximum appeal to women, who as we all know, are the true decision makers. Considering gender in the design and operation of centers matters.