Corrections
Our last issue included the article “A nascent trend, the rise of the barcade.” Paul Kermizian, one of the founders of the three Barcade locations listed in the article kindly wrote to us to point out that they opened their first location in 2004 in Brooklyn, three years earlier than we attributed to the start of the concept, and that Barcade is actually their registered trademark, and should not be used as a generic industry description. Paul, our apologies for the mistake.

Also, in our story about our Da Nang, Vietnam entertainment and restaurant project, we got carried away about the number of piers being drilled to support the structural basement slab. We had one too many zeros. The correct number of piers is 1,456, but that’s still a lot of drilling.

National Restaurant Show
In May I made the annual pilgrimage to the National Restaurant Association Show in Chicago at the McCormick Place Convention Center. It’s the largest restaurant show in the world covering over 13 acres of exhibit space with 2,100 exhibiting companies and 62,500 attendees from all 50 states and over 100 countries. I affectionately refer to it as the largest smorgasbord in the world, as you get to sample so many foods (the sweets were especially tempting).

I believe this is a must attend show for anyone in the location-based entertainment industry, just as important as the IAAPA show. As you know from our articles and project work, we consider great food and beverage critical to success, no matter what size the LBE is. The show exposes you to all the great pre-prepared foods that are available so you don’t need a chef to turn out good quality food.

Here’s just one example. Kettle Cuisine offers 50 different refrigerated soups, chilis, stews and chowders with a 35-day average shelf life and 24 varieties of frozen soups that all you have to do is heat and serve. They include varieties that are vegan, vegetarian, dairy-free, low fat and gluten-free. In addition to more traditional varieties such as chicken noodle, French onion and beef stew, they also have an assortment of sophisticated and global selections such as: 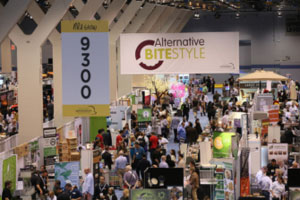 I sampled a large number, and they were great. There were many other vendors at the show with pre-made soups that were just as good.

Walking the show makes you aware of growing and up-and-coming food trends. Here’s my quick take of trends I noticed:

Healthy kids’ foods
The show featured a Healthy Kids Fare pavilion area. I noticed that the number of healthy food products for kids has increased dramatically over past shows. 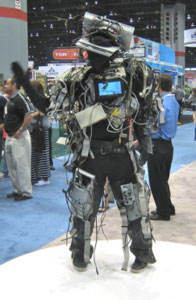 Some of the latest restaurant technology could be found at the show. This person might be carrying it a little too far

Greek yogurt
There were 25 yogurt-related exhibitors, many featuring variations on Greek yogurt.

Flatbreads
There were as many flatbread products as pizza products

Ancient grains
The newfound popularity of ancient grains was very much in evidence. Exhibitors were showing quinoa, amaranth, freekeh and roasted green wheat foods among others.

There were a lot of demonstrations at the Show, including this one I attended by celebrity chef Brian Malarkey. 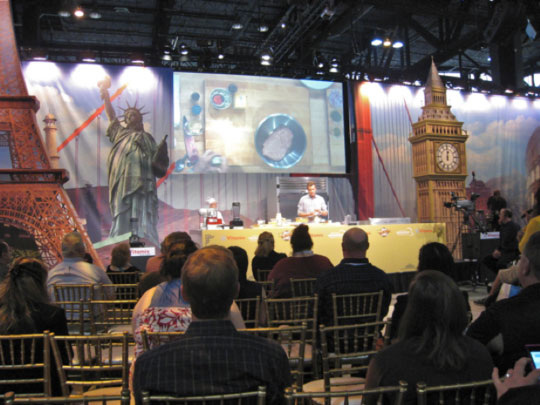 Locally sourced foods are a significant trend with consumers. At the show, Urban Cultivator introduced the ultimate answer to local sourcing, growing fresh herbs right in your restaurant. 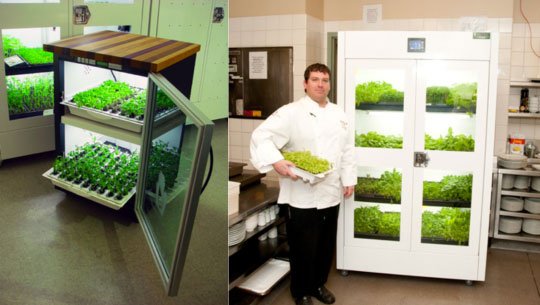 The restaurant show also featured an area showcasing the most innovative new kitchen equipment. One interesting new piece was the Ovention Matchbox, a self-loading and unloading oven that doesn’t require a hood and allows food items to be cooked one after another at temperatures that vary by up to 100 degrees. Check out all the Kitchen Innovation Award winners here.

International Travel
I have a lot of international travel scheduled in the next few weeks. When you receive this eNewsletter in your inbox, I will be in Ho Chi Minh City (Saigon), Vietnam working with our interior designer to source interior finish materials for our entertainment center project in Da Nang and to meet with the restaurant POS supplier and the Vietnamese food consultants. Then it’s on to Da Nang where the project is located. A little over a week after returning I’m off to Beirut, Lebanon. That trip was rescheduled due to the rocket attacks of the Hezbollah neighborhoods that took place there in early June. Hopefully things will have calmed down by the time of my trip. Then a week after that trip I’m in Chicago for Foundations Entertainment University and I’m leaving directly from Chicago to travel to England to visit around a dozen agritainment and agritourism farms in the U.K. with a group of North America’s the top agritainment farmers in the Agritainment Study Group I belong to.  Future eNewsletters will have reports on my trips.

New Clients
California
Conducted preliminary feasibility for a shopping center owner who wanted to develop an empty store as a family entertainment center. Based on our analysis, we advised them the project was not feasible.

Greater Atlanta, Georgia metropolitan area
Began work on a goat-tainment project. Goat-tainment is a combination of a goat dairy and retail store with agritainment/agritourism attractions. We are assisting the client with a grant application for a USDA Value Added Producer Grant for the planning and feasibility work.

Orlando, Florida
Evaluating the best areas of the city to develop a new project for an established family entertainment center operator (though new to the Orlando area) that will predominately cater to residents.

Ohio
Evaluated market feasibility for a client who wants to develop a children’s entertainment center. Advised client that the project was not feasible at the site they had selected.

White Space project
Working on development of a social-tainment concept to fill a white space in the market.

Burlington, Iowa
Designing a total renovation of Pzazz Resort Hotel’s indoor water park. Part will be converted to new dry attractions to be part of their Fun City FEC with a Ballocity unit, ropes course and toddler play area and part will renovated as an indoor water park with children’s play events, a current river and other water activities.

We have some very interesting articles in this edition of our Leisure eNewsletter. We hope you find them valuable.