Evidence that the staycation trend is both real & long-term

We recently dug into unpublished data from the U.S. Consumer Expenditure Survey to determine how real the staycation trend is in respect to spending at location-based entertainment venues during trips and whether it is only recession-based or perhaps a much longer term trend. For our analysis, a trip is defined as further than 50 miles from home or on an overnight trip, which includes vacations.

The Consumer Expenditure Survey collects information on the spending habits of American consumers, including data on their expenditures, income, the number of households making particular expenditures and other household characteristics, using both a Quarterly Interview Survey and the Diary Survey of approximately 7,000 households each year. The survey is conducted by the U.S. Census Bureau division of the U.S. Bureau of Labor Statistics. Entertainment spending in this article is defined as fees and admissions at location-based venues including movies, theme parks, concerts, museums, zoos, FECs, plays and similar entertainment-type venues.

Our CEO, Randy White, first reported our findings during his keynote speech at the DNA (Digital Out-of-Home Interactive Network Association) conference held January 21, 2013 in London. This is the first time we are sharing the results online.

The first thing we looked at was participation – what percent of all households spent money each year on entertainment during a trip. Since 2000 the percentage of those spending households has decreased by 34%. As you can see from the graph, it is not a recession-caused trend, but rather a long-term trend. 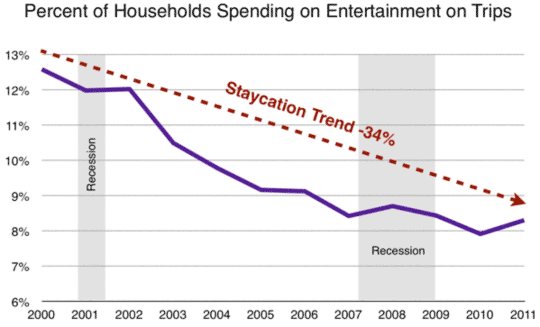 We then examined average household entertainment spending during trips and found the exact same long-term trend (All spending data has been income-adjusted to 2011 dollars.) This time we went back to 1990 to see when the staycation trend might have started. 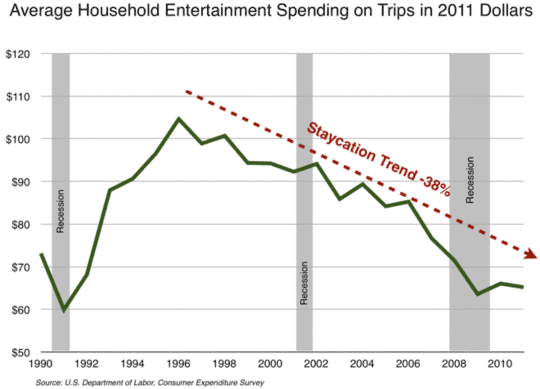 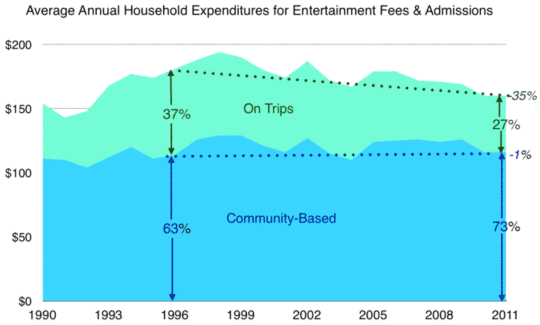 The data clearly shows that there is a very long-term staycation trend that started 15 years ago.

Next we dug down deeper into the data to examine whether the decrease in household participation in entertainment spending on trips varied by household income. We examined quintiles of income, as that is the best methodology for a longitudinal analysis to factor out inflation and income changes. 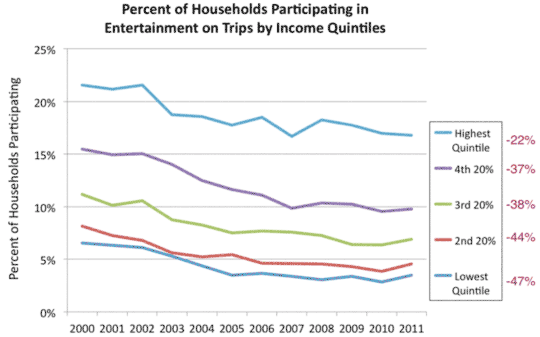 The following graph shows how spending changed for households by quintiles of income. 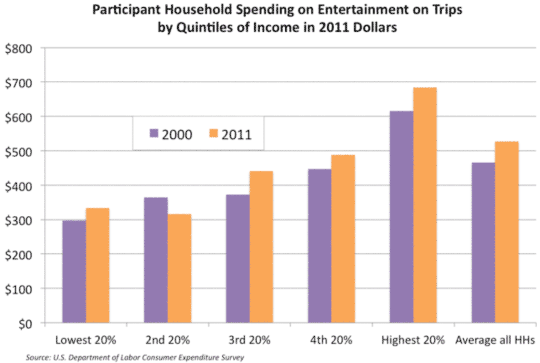 Finally, we dug into even more detailed household income data to look at both participation in spending and the amount of spending for entertainment on trips in 2011. 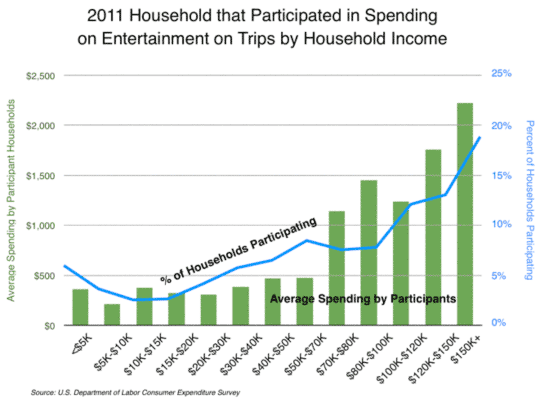 The graph shows that there is a definite positive correlation between household income and both the percentage of households that spent for entertainment on trips and how much they spent. In 2011, households with $100,000 and higher incomes were 18% of all households, yet they accounted for almost half (48%) of all trip entertainment spending.

Our conclusions from all this analysis are twofold:

There is little doubt the staycation trend is very real.