However, although it appears Americans are loosening their purse strings for larger, and perhaps long deferred expenditures, they are still exhibiting frugal habits in their everyday life. The majority of Americans say that they are likely to decrease spending over the next six months on entertainment (59% up from 55% in November last year) and on eating out at restaurants (62% up from 59%). 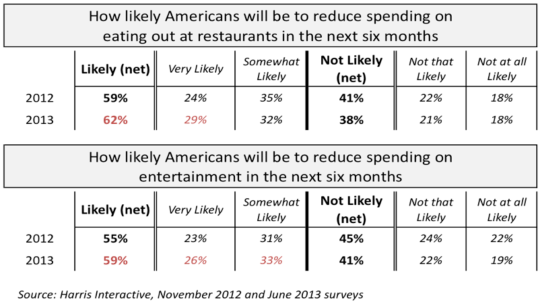 This does not bode well for the location-based entertainment and FEC industries. Americans appear to have shifted their spending priorities over the past years. If you have been following articles in our Leisure eNewsletter and in our CEO’s blog over the past years, you already know that participation in and average household spending at location-based entertainment venues has been on a long-term decline. The Harris survey data indicates the trend will continue.

This trend is not just caused by frugality brought on by the Great Recession or people turning to smaller changes they can make in everyday life to enable delayed larger purchases. It also has to do with a shift in how and where Americans consume entertainment. The rapid growth of at-home and mobile (smart phone and tablet) digital entertainment and social media has allowed Americans to satisfy much of their entertainment and social needs 24/7 at little or no cost and with none of the inconvenience of having to travel to an entertainment venue. A recent poll about social media by the research firm Penn Schoen Berland found that 88% of social network users consider visiting and posting on social networking sites such as Facebook and Twitter as a form of entertainment.

What this all says to us is that to win today, to be competitive and capture both attendance and spending, you need to target the higher socioeconomic and offer high quality, what is called high fidelity, experiences, ones that are compelling enough and a great enough value (value for the cost, not low cost) to draw people out of their homes and the low cost and high convenience of their digital entertainment and social options. Great food and beverage and great service are now just the minimum bar of entry. And those leisure experiences need to offer more than just entertainment. The experiences need to offer a great leisure, social experience in a great, aesthetically pleasing environment.

It's a whole new reality for location-based entertainment. The old paradigms that once worked will only cause extinction today.