The failure of feasibility studies that rely on demographics

There is nothing more important to the success of a family entertainment center (FEC), bowling center or other type of location-based entertainment center (LBE) than the market feasibility study. The market feasibility study lays the foundation for the center’s success. It should identify the geographic trade area and analyze its population, and then determine if a project is feasible, and most important, if a project is feasible, what is most feasible. This includes the mix, the size and what is so often neglected to the detriment of success, the target niche population that will dictate the needed brand identity.

Our company has been retained by many existing (LBE) facilities with less than optimum performing centers to help them grow their businesses. When we examined the original market feasibility studies they relied on, we typically found two major flaws. 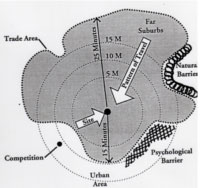 The problem with concentric circles is that they don’t accurately represent how people behave and make decisions on whether or not they will visit a location-based business, what type they will visit and how often. Those decisions are influenced by physical and psychological barriers, awareness, competition, drivetime, traffic congestion, patterns of travel and other factors. True trade areas end up being amoeba-shaped and often extend much further in one direction than another. In some markets, the primary trade area might extend a 10-minute drive in one direction and a 25-minute drive in another. In densely developed areas, a 10-minute drive might cover only 2 miles, whereas in less dense areas with few traffic lights and good road access, 10 minutes might extend 6 miles or more.

Only relying on demographics
Market studies that rely only on demographics to define a trade area’s population (residents, workers and possibly tourist) only give a broad picture of the population’s composition. Demographics only lump people in large categories and averages. It’s a little like describing a roller coaster by its average height. You don’t get a clear picture of its characteristics. 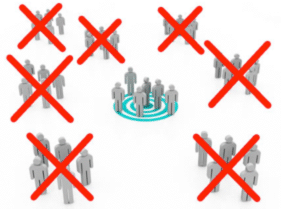 Only a small segment of a trade area’s population will be customers. It is critical to identify that target population

Taco Bell attracts a distinctive group of customers, much different than the niche market Chipotle targets, and there is very little crossover between the two. Both restaurant chains understand whom they are targeting and design everything about their business to attract them. Their niche markets define how they design their brands, and most importantly, the brand experience in the restaurants.

As our article What is happening to community-based entertainment in this issue shows, both the participation rate and spending varies directly with income. So it is important to understand the socioeconomic breakdown of the trade area population to first define the niche market, and then to understand market penetration and attendance. In the example of the age 25-44 adults, both the participation rate and spending will vary based upon their incomes.

But incomes alone won’t define populations’ preferences, likely participation (market penetration) and spending. In addition to incomes, education, employment, family composition, and what are called psychographics – personality, values, attitudes, interests, behaviors and lifestyles – influence who will participate and how much they will spend on location-based entertainment. For example, a 35-year-old male that is a construction work and married without children is far different than a 35-year-old male who is single and a lawyer and is far different than a 35-year-old male postal worker who is married with two children, ages 3 and 6. You cannot expect the same entertainment behaviors from them.

This is why socioeconomic-lifestyle (SEL) population segmentation is so critical to understanding and analyzing a trade area population. It allows you to drill down and dissect a trade area population based on peoples’ behaviors, not just broad demographics. SELs can be used to predict people’s behaviors and preferences as consumers far better than demographics, which only aggregate different socioeconomic-lifestyles in broad demographic categories.

SELs are great for understanding the homophily of a trade area, the tendency of people to associate and hang out in places with people similar to them. In simple language, homophily means birds of a feather flock together. People like to be around people with similar social status and values. They want to visit businesses that match their values, needs, wants and tastes. Homophily is exactly why Denny’s attracts a different group of people than McCormick & Schmick’s.

To be successful, to have a center that has a brand identity that resonates with a particular group of people who have commonalty in their SELs, you need to define what that group of SELs is in terms of who is located in the trade area, and then based on that do the projections and decide how it applies to the center’s total development, the mix of attractions, the type of food, the level of finishes, the type of customer service operations, in essence, the total guest experience and all the center’s brand attributes.

So if you were planning to open a coffee shop in a trade area, you would want to know whether a Starbuck’s or a Dunkin Donuts would have a larger customer base. That’s where SELs can solve the problem.

The data and information provided by SELs can get quite complex. When conducting feasibility studies for new LBE centers and developing enhancement or turnaround strategies for existing businesses, our company uses an SEL segmentation system that breaks the American population into 66 distinctive groups. Here’s an example that shows how different three different SELs can be that predominately have age 25-44 adults.

Young Digerati
Young Digerati are the nation’s tech-savvy singles and couples living in fashionable neighborhoods on the urban fringe. Affluent, highly educated and ethnically mixed, Young Digerati communities are typically filled with trendy apartments and condos, fitness clubs and clothing boutiques, casual restaurants and all types of bars—from juice to coffee to microbrew.

Kids & Cul-de-Sacs
Upscale, suburban, married couples with children—that’s the skinny on Kids & Cul-de-Sacs, an enviable lifestyle of large families in recently built subdivisions. With a high rate of Hispanic and Asian Americans, this segment is a refuge for college-educated, white-collar professionals with administrative jobs and upper-middle-class incomes. Their nexus of education, affluence and children translates into large outlays for child-centered products and services.

Shotguns & Pickups
The segment known as Shotguns & Pickups came by its moniker honestly: it scores near the top of all lifestyles for owning hunting rifles and pickup trucks. These Americans tend to be young, working-class couples with large families—more than half have two or more kids—living in small homes and manufactured housing. Nearly a third of residents live in mobile homes, more than anywhere else in the nation.

And when we look at the values and buying behaviors of these three groups, we find large differences. Adults in the first two SELs are generally compatible and could be the niche target market to go after if there are significant numbers of them in the trade area that a competitor is not capturing. The third group isn’t compatible with the first two as their tastes and entertainment options preferences are far different.

Developing a LBE is really about developing a brand that targets and attracts a particular segment of the population as loyal customers. This is not something that can be accomplished with demographics. Only socioeconomic-lifestyle analysis allows you to determine true feasibility and determine the most optimum population group to design for.