In one of Randy White’s blogs, he wrote about the 2000 to 2010 30% decline in average household spending for entertainment while on trips, what has been referred to as part of a staycation trend. A chart in his previous blog shows how the decline has been a long-term trend, not just attributable to the economic turndown that started in 2008.

You might wonder how this is possible. It’s due to the fact that macro data, such as average household entertainment spending on trips, applies to all spending at all possible venues, whereas there can be a micro trend that is just the opposite when you look at specific venues.

So here’s what we found. We examined attendance at the top 10 attended theme parks in the U.S. between 2002 and 2011. Over that decade, the same theme parks have consistently been in the top ten. Their 2011 highest to lowest order is: 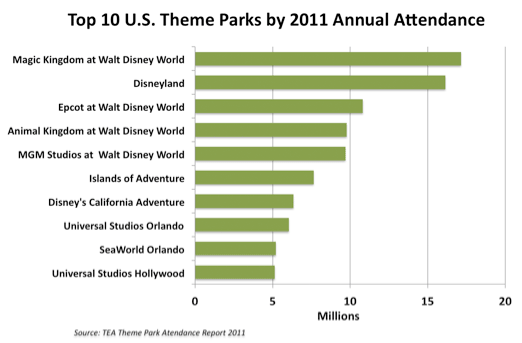 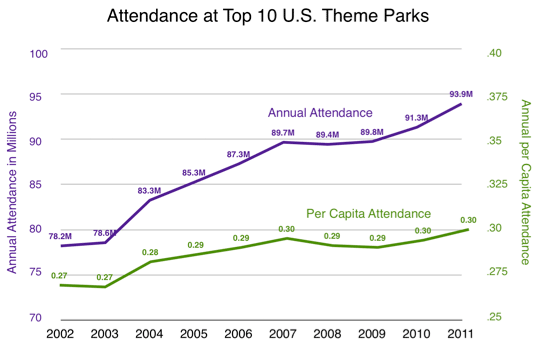 This is impressive since between 2002 and 2010 average household location-based entertainment spending on trips (inflation-adjusted) declined by 30%. 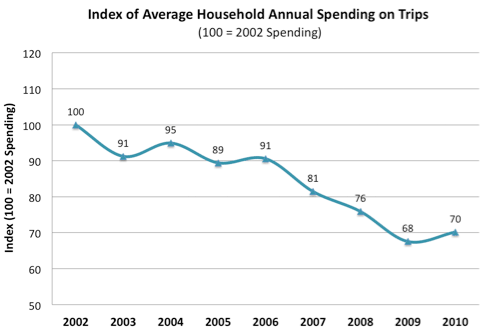 The Great Recession had a very minor impact on attendance at the top 10 theme parks. Compared to 2007 pre-recession attendance, by 2009 per capita attendance was only down 1.7% and thereafter increased. During the same period, all entertainment spending on trips declined by 17%. It appears the top theme parks are getting a larger slice of a shrinking pie of entertainment spending on trips. Considering how expensive it is to attend one of these ten theme parks makes this performance even more amazing.

In light of the trend of declining trip entertainment spending, we believe this performance of the top 10 attendance theme parks can be explained by a number of trends occurring in the location-based entertainment industry:

The increasing per capita admissions that the top theme parks are capturing indicates that the public, and especially higher socioeconomic households, are willing to visit and spend at high quality entertainment venues that offer good value. Unfortunately, as we travel the country, we continue to see many FECs, including many newer ones, being developing with design paradigms of the past and dooming themselves to the fidelity belly.

The successful future for FECs and related types of LBEs, including bowling centers, is to target and attract the higher socioeconomic market. That’s where the attendance and spending is today and as the trends indicate, will grow even larger in the future.